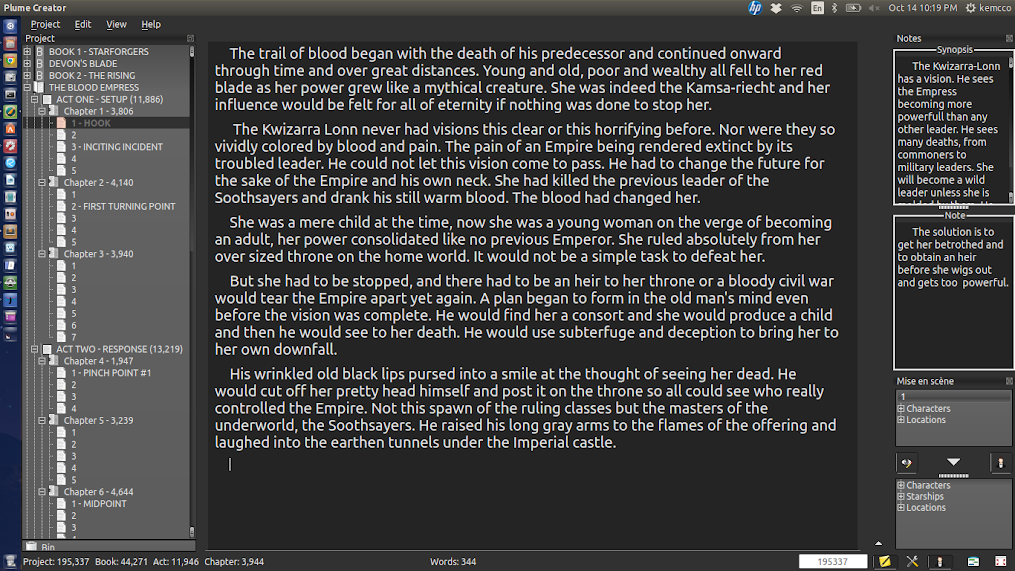 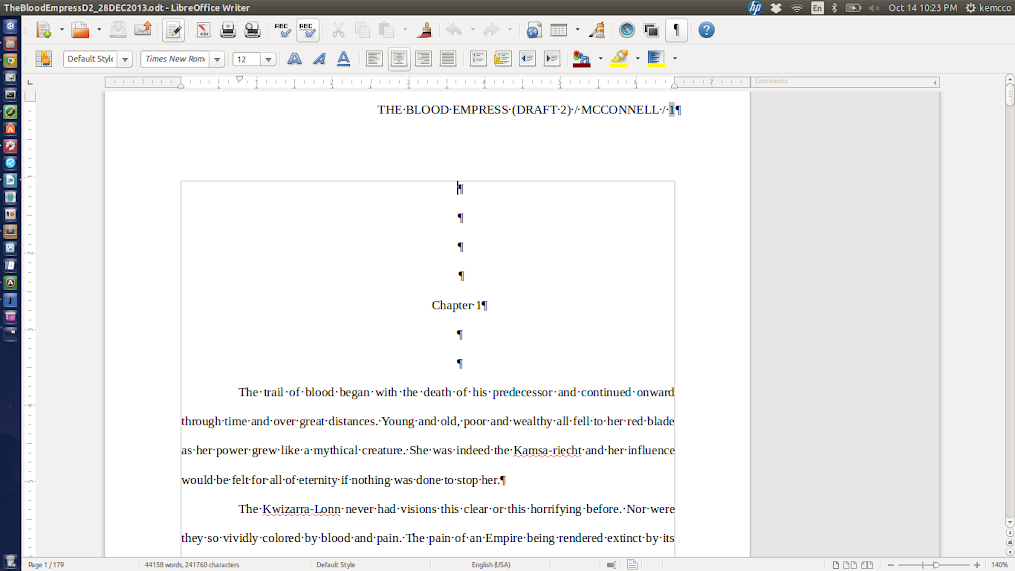 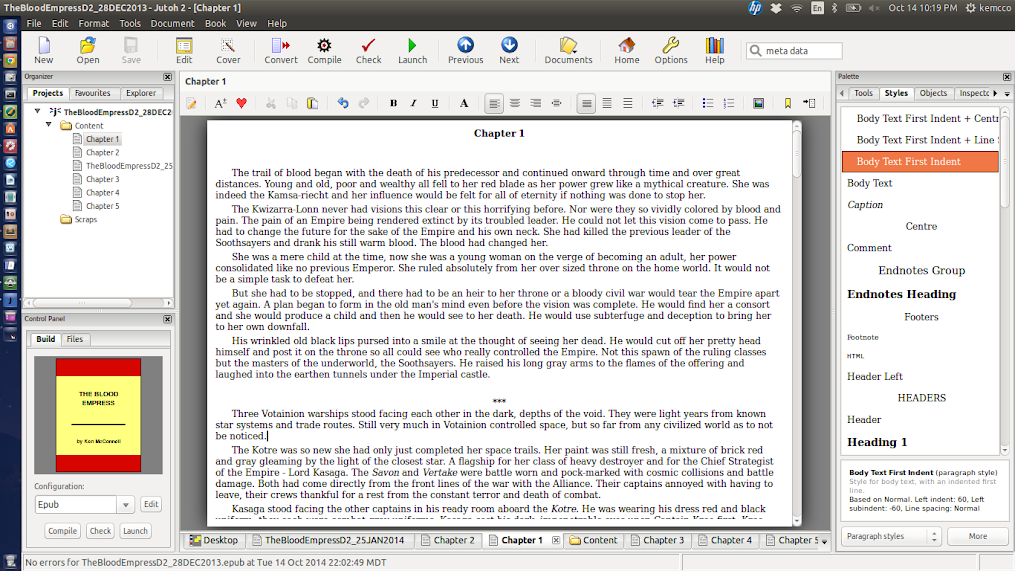 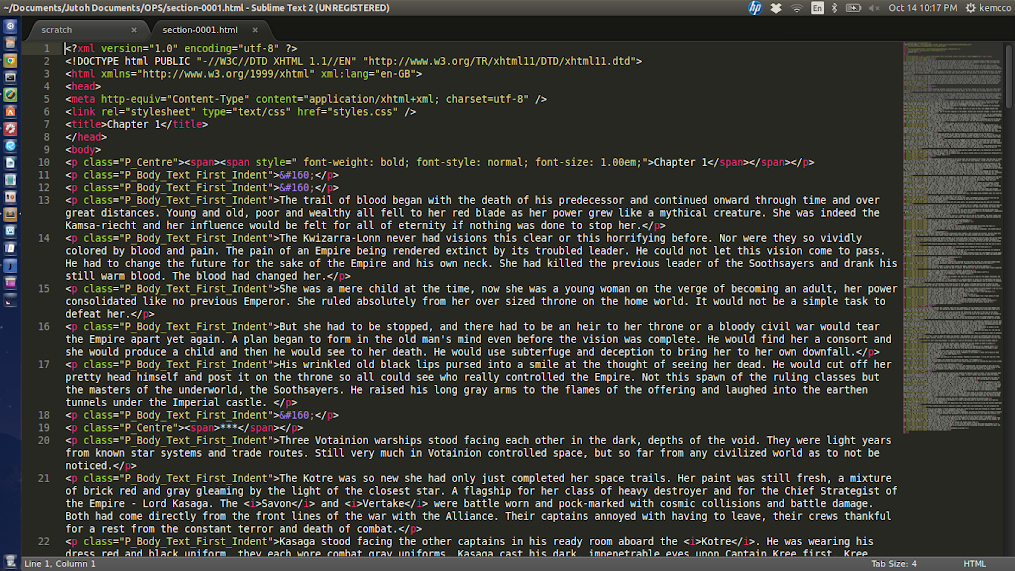 Those of you writers out there using the fantastic writing tool – Plume Creator are in for a treat in an upcoming release. Plume is getting themes and that means a dark version is in the works. I’ve been helping the developer, Cyril, work out a dark theme for the Linux version of Plume. Below is an early screenshot showing the unfinished theme. 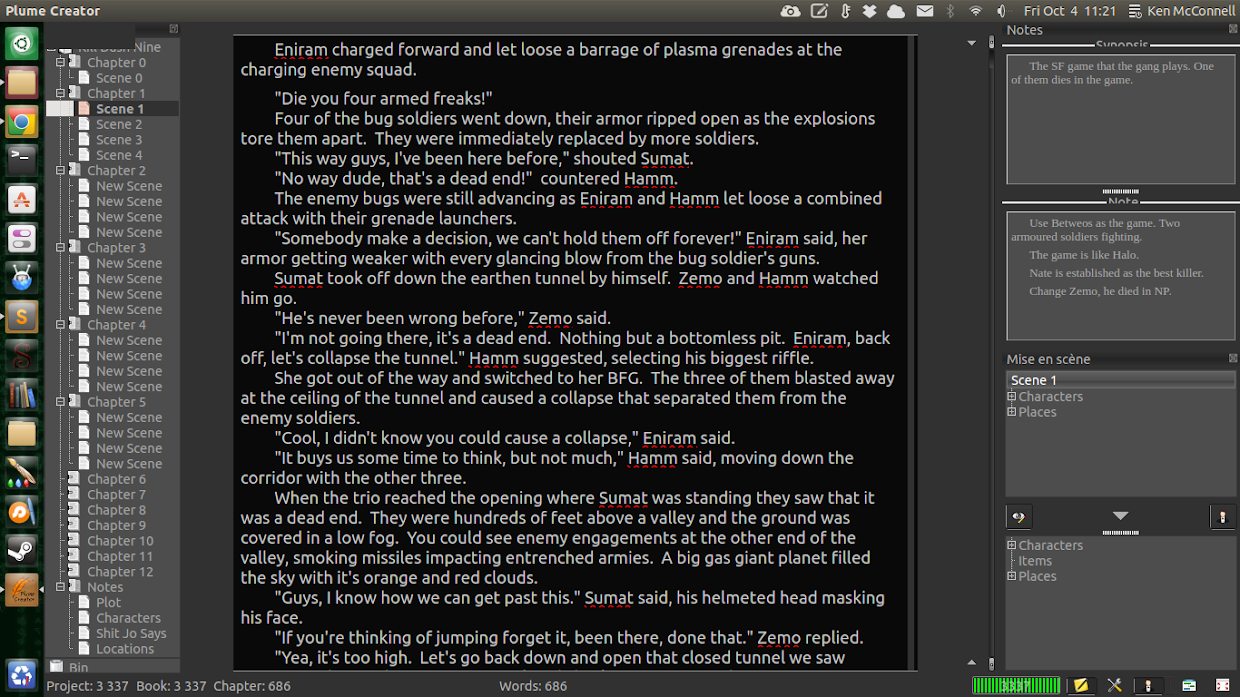 So what do you think? Are we on the right track?

If you have any UI or design experience please leave a comment with your constructive criticism. We aim to please!

Version 0.61 Beta of Plume Creator has hit the download servers at Sourceforge. Get it while it’s hot!

Lots of attention has been placed on the look and feel of this release. If you are a writer who likes the idea of a Scrivener type program, but needs it to work on Linux like I do, this program is well worth the effort to get and start using. It’s also available to Windows users.

I’m one of a handful of people helping the developer, Cyril Jacquet, test the program. In fact, I’ve been using Plume Creator to write my latest novel and absolutely loving it. This is still beta software, but I’ve never had it completely botch my novel. Normal backups guarantee that peace of mind.

Cyril is very open to suggestions in making the program better, so if while using it you think of a way to improve it, let him know. You could see that feature in a future release! Plume is Open Source and uses the QT libraries, the same as KDE. As you can see in the above screenshot, it looks fabulous in Unity. I’ve recently converted my coding text editor to Sublime Text. This post is a reference for if I have to set it up again. The editor can be used on any OS and looks particularly nice on all of them. It’s also a Python program. (This post subject to updates, as I find nifty plugins)

Get it here: Sublime Text

Reference this blog post for common plugins and general tomfoolery.

Make your default Monokai theme have a dark side bar.

I’ve been helping my youngest son, Spencer, learn to program in Python by designing an RPG game. We’re following this guy on YouTube and will then branch off and add to his framework. Spen’s using my old netbook running the latest Ubuntu and he decided that he liked the Geany IDE the best. I checked it out and have to agree with him.

The screenshot shows our first class and a bit of test code to see if it works. The IDE will let you hit Run and open the program in a terminal to see the results. Very handy. Personally, I’d just use Scribes with an open terminal, but since he’s new to programming, I think it helps to have an IDE.

We set up our project on Dropbox so we can both access it from different computers. We have a Windows laptop that he also uses and yesterday I set up Python on that and wrote a quick batch script to run the current test class automatically. I think we are set for some fun times ahead.

My friend Shawn Powers is the editor of Linux Journal Magazine. In this month’s issue he mentions Plume Creator, the writing tool I’ve been helping the developer Cyril test.

I hope this gives the program some new users. Plume no longer looks like the screenshot in the feature, its changing so fast. If you want to get in on the fun, please go here and download it to give it a spin.

Thanks again, Shawn for helping to boost our signal!

Since moving to Ubuntu Linux on my laptop, I have developed an interest in native applications. One of my favorite new text editors is called Scribes. Scribes is more than just another Gnome based text editor. It’s an example of a programmer pushing the boundaries and following his bliss, to make a unique and awesome new take on a simple application.

As this bit from the About page says, Scribes is not your average text editor. It has a mission. Lateef Alabi-Oki is the programmer behind Scribes. He has very particular ideas about what he’s doing and I for one, find that refreshing. You should read his blog if you are a programmer.

Anyway, do give this editor a spin and see if you like it. I use it all the time now and love it. I had some out of memory errors whenever I tried to upgrade my WordPress installation for this site. Finally someone clued me in to the fix. Deactivate all your plugins first, then do the upgrade. When you are finished upgrading, reactivate the plugins. It’s a simple memory management issue, WordPress tries to old all the plugins in memory and then has no room for doing the upgrade.

Anyway, the upgrade proceeded normally after I learned that trick. Now you know it too.