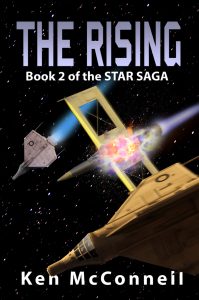 In the thrilling second book of this Space Opera series, the President of the Alliance is blown up in her office by one of her own androids, a sentient Silicant named Thirty-seven. Sumi-ness, an innocent Silicant presidential aide is accused of the crime. Home on leave for her mother’s funeral, ace starfighter pilot, Devon Ardel, is drawn into a web of corruption and deceit in the Alliance’s capitol city as she tries to help prove Sumi-ness’s innocence. The leader of the Silicants, Seventy-three, tries desperately to liberate his android followers and find a new home for them among the stars. The only thing stopping the Silicants from leaving is the new President of the Alliance, who fears that the Silicants might turn on their creators. It’s up to Devon to unravel the political corruption before it tears apart the Alliance during their war with the Votainion Empire.

One thought on “STARFORGERS, BOOK 2 THE RISING”