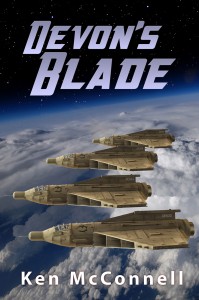 Commander Devon Ardel is sent to a remote base on a backwater world to take over a struggling starfighter squadron. She soon realizes that her pilot’s simply lack the will to fight an enemy that has dominated them for months. Inspiring her people to fight proves easy enough until the enemy retaliates with a new and deadly fighter. Now she must figure out new tactics and overcome an enemy ace who threatens to kill them all in single combat aerial duels.

A gripping story of fighter pilots at war, told in the spirit of classic air combat yarns.

“I absolutely loved the fact that the main characters were strong, flawed and fantastic females. Not all of them were likable, and they didn’t need to be. It just caught me so off-guard – and was such a pleasant surprise – that this book, that could have easily been filled with nothing but men, was female-dominated. Men, whilst present, very much took a backseat for most of the action.”  Sci-Fi and Scary

“If you’re a fan of war fiction, especially with aerial fighting, and like your science fiction to have a large dose of recognizable realism, Devon’s Blade is action-packed, well-researched, and a fun read.” Self-Publishing Review

Now available on Kindle and paperback.