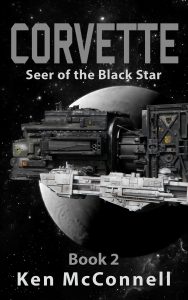 The crew of the Weippe are back in action, this time they are going after the Black Star, the most notorious pirate ship in the Outer Rim!

Commander Vance and his crew have returned from a year-long stay in the Outer Rim, protecting civilian transports from pirates and keeping the shipping lanes open. Just as they are ready to return to action Vance is given orders to find and kill the Black Star. There’s just one problem; the Black Star’s new captain, a Blue Devil named Vynn, has captured the Weippe’s First Officer, Lieutenant Lestor. Can Vance get his crew member back and defeat Vynn or will they lose her and the Weippe to the pirates?