I’ll be on a panel and doing a reading for Indie Author Day – October 14th a the Main Library in Boise. Looking forward to seeing everyone there. Come and say Hi to me and all the other local Indie writers!

This Thursday at 1:00 PM, fellow Boise writer Victoria Gray and I will be guests on The Writer’s Block with Amanda Turner. Tune in to Boise Community Radio on FM 89.9.  We will be discussing the writer groups in Boise that we belong to and all things writer related. We are both involved in several writing groups. Victoria is the current President and I the Vice President of Partners In Crime the Boise chapter of the national, Sister’s In Crime group. We are also both in the Boise Speculative Fiction Writers group.

If you can’t tune in live, then be sure to download the interview from the web site.

The Smashwords version of Starstrikers SE (Second Edition) is uploaded and ready to order.  We’re working hard on getting the new cover finished so that I can upload that and then update the Kindle version at the same time.  I’m real excited to bring out this definitive version of the novel.  It’s been professionally edited and painstakingly updated and is now ready to be the new canon for the series. If you have not read it yet, you won’t want to miss this version.  Trust me, it’s worth talking about.  So get it, read it and spread the word.

The free versions that have been available on this web site will be scaled back to a text only file.  If you want the book in a particular format, please buy it on Smashwords.  The new edition will be uploaded to Scribd, after the book PDF comes out in another month.  It will be available on Scribd for free. I will be blogging the entire novel in April, just like I did for Null_Pointer. 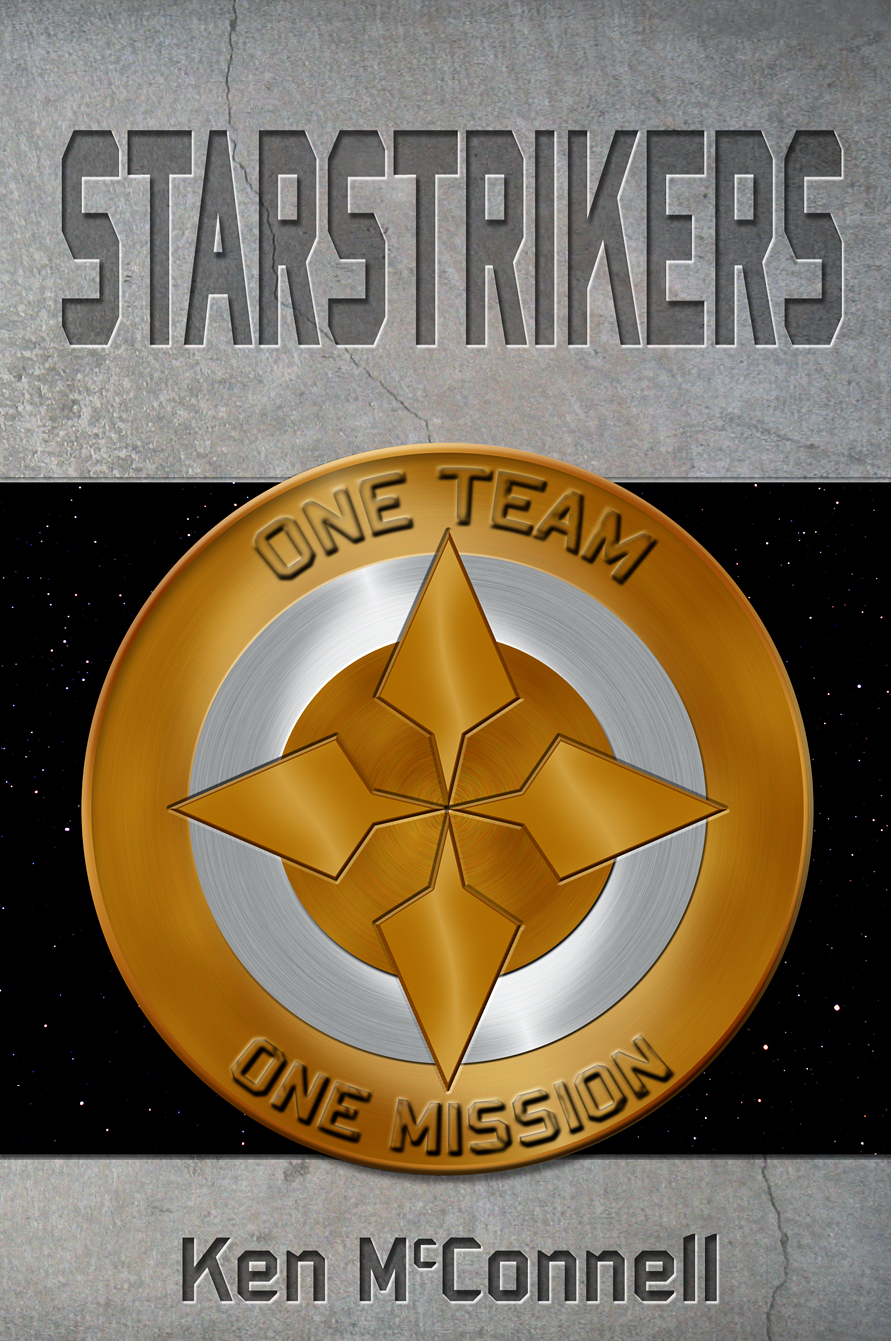 This is a sneak peek at the new cover.  There are many changes coming, but the layout is pretty much finalized.  We’re going to make the title pop more and tone down the shiny coin and make it look more used and worn. It looks nothing short of fantastic and I can’t wait to share it when it’s finished.  Oh, in case you are wondering – the artwork is pure Byron McConnell genius.  Need a great cover for your novel – he’s available!

I have four paperback copies of Null_Pointer available to anyone with a decent sized platform who wants to review the novel.  If you have a blog, are a newspaper book reviewer or have some other mass-media reach, please email me and I will send you a copy.  ken.mcconnell at gmail dot com.

The LL Book Review has been very kind to my books.  Shannon Yarbrough gave a pretty generous review of Starstrikers which was directly responsible for the highest monthly sales in the book’s history.  Now Shannon has reviewed my second novel, Null_Pointer.  I’ll let his words stand for themselves, please follow the link and read the review for yourself.

It’s gratifying to be recognized by others for your hard work.  Thanks again Shannon for shinning your spotlight on my little books.

A quick note to remind readers that I will be appearing in public today at The Cabin, in Boise; along with several other local authors.   Please come out and listen to us read from our work and discuss how we got published.  The fun starts at one o’clock and goes on until three o’clock this afternoon.

In case you had not heard, the Self-Publishing Review has a new interactive site and it’s fast becoming the place to hang out for indie publishers and writers.  I cross posted my story about why I self-publish you can read it here.  Please do check out the site and become a member if you are a do-it-yourself type person.

Also, I’ve been updating the GB PRESS web site this week, so stop by and see what’s being released this year and what we already have available.  Thanks!

Shaun Duke over at The World in the Satin Bag blog has very kindly featured my books in this post.  Do stop by and check it out and then give his other posts a read, you may get hooked on the site as I was about a year ago.

I’ll be one of the authors giving a reading from my novel Null_Pointer and discussing it at The Cabin on January 30th from 1:00 PM to 3:00 PM.  Please come on down and join us!

The publishing world is changing daily, it seems, and interest in non-traditional forms of publishing is rampant. As “Writers Working for Writers,” the Idaho Writer’s Guild is proud to launch a new program series, “Random Readings,” for writers and readers to explore together what publishing means to them and how to go about it.

Random Readings kicks off on Saturday, Jan. 30, from 1 p.m. to 3 p.m. at The Cabin in downtown Boise. This series will be held on a quarterly basis, and each will focus on a different theme. At each Random Reading, featured writers will share their experiences moving words from their muse to the printed page.

They will read from their books, with commentary about how they tamed their material. Plenty of time will be left for asking questions and sharing thoughts about the nuts and bolts of the publishing processes they chose. The afternoon includes refreshments and time to socialize.

On Jan. 30, Bonnie Dodge, Dixie Thomas Reale and Patricia Santos Marcantonio venture from their Magic Valley homes to Boise to share how they wrote and published “Voices from the Snake River Plain.” A collection of short stories, poems and essays published in 2009, the book has been described as “a small treasure….we learn there is beauty in the landscape around us and people with stories to tell.” Tales by these award-winning writers touch on disparate subjects: a jackalope, an old Mexican ghost story, haunting landscapes and a road trip with Louis L’Amour and Zane Gray.

Boisean Valerie Robertson reads from her debut novel, “Blade’s Edge.” She is a former president of the Coeur du Bois Chapter of Romance Writers of America, and the founding and current president of the Popular Fiction Association of Idaho, which produces the Murder in the Grove mystery conference. Valerie also organizes the Boise Speculative Fiction writer’s support group.

Also from Boise, Ken McConnell is both traditionally published and self-published.  A software test technician, Ken wrote and published “Starstrikers” in 2008. His first novel is “a military space novel that takes place between two galactic civilizations.” He also wrote “Null Pointer,” a mystery novel about a programmer sleuth.