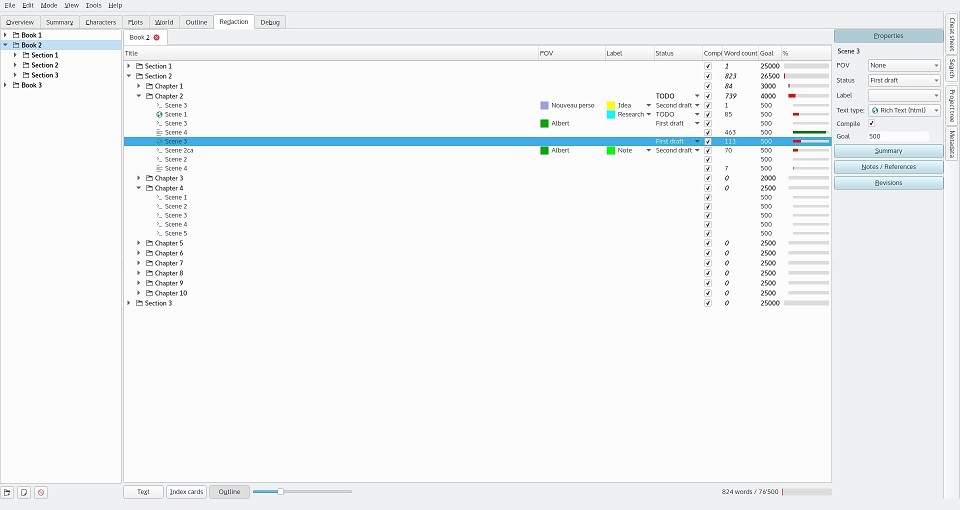 I’ve started testing a new writing program for Linux users called, Manuskript. This is a very promising first draft tool along the lines of Plume Creator or Scrivener. If you want to give the program a shot, I suggest you use the develop GIT version, instead of the pre-release. But if the terminal causes you anxiety then just wait for it to go out of beta, because this one is still unstable and going through rapid development.

I started outlining my latest novel using Manuskript and found it quite nice to use. Unfortunately, I was not able to recover from a file system location change and wound up losing some of my outline. For this reason I’ve returned operations to Plume Creator and will be coming back to Manuskript to test and play around with it as I write Corvette. What this means is I’ll be cutting and pasting my completed scenes into Manuskript after I create them in Plume. Then I won’t freak out if something happens to them.

But if you want to install and play around with Manuskript I highly encourage it! It’s a pretty slick tool already and as it becomes more stable it will be another welcome addition to the Linux writing tool set. While I was using Manuskript I introduced the program’s developer to Plume Creator’s developer, hoping the two of them could share experiences and ideas. I’m pretty sure this will help improve both tools and give us Linux writers a huge productivity boost.

As time permits, I’ll be doing more posts about Manuskript and showing you some of the features I really enjoy. If you have any program testing chops, this is the perfect opportunity to help a new project out. Download the develop version from GIT and let the developer know about the issues you find. That’s called giving back to the community and I believe it’s an essential part of being a writer. Very few folks use Linux to write books, but those of us who do, have the unique ability to help developers make our products better. Something users of proprietary programs like Scrivener, and Word, can not do.