We’re at the month mark after the release of my novel, Corvette. The book debuted on 21 March but didn’t really take off until April. What I’ll be looking at today are April’s numbers.

This chart is from my KDP dashboard and shows the sales of just Corvette. Getting to 50 on the third day was key to kickstarting the whole climb. After that it was the jump to just under 100 that put me on some Best Seller lists and from then on the climb was pretty steady. Getting over the 100 a day peak resulted in a big boost in sales that lasted until the 150 a day period which is still off and on until the end of the month.

The blue line graph is how many page reads the book is getting in the Kindle Select program. Much of the time I make more money off of those page reads than I do by actually selling a copy of the ebook. Amazon pays you for a “sale” after a reader completes 60% of your book. This is why it’s essential for your book to be in Kindle Select. 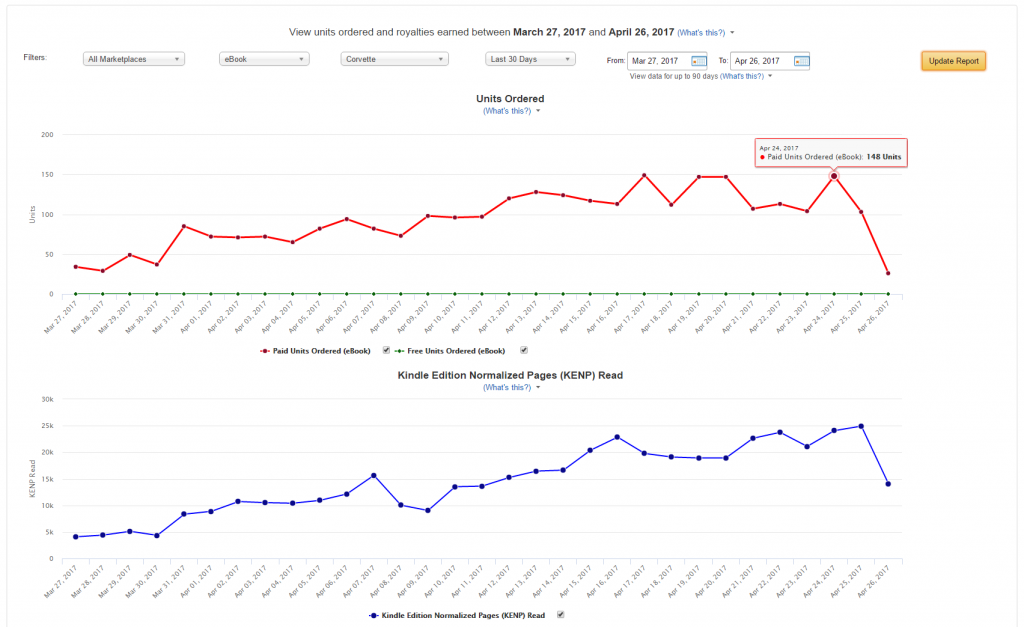 This chart shows how Corvette’s sales are boosting the sales of my other Star Saga books. About two weeks into the month I slid three more of my lower priced books into Kindle Select to boost readers. It’s only just starting to help towards the end of April. This means I had to take the books off sale at Kobo and Nook but that was not a problem since sales on those platforms were non-existent. 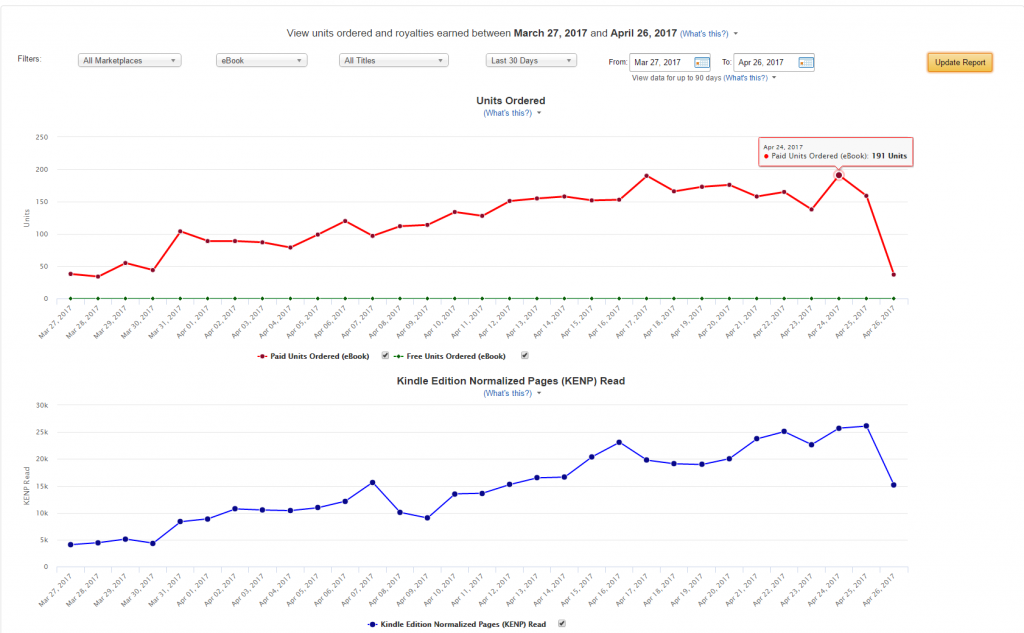 I decided to pay for a better graphing tool for my Amazon numbers and here is a late April screenshot of sales using Book Report. 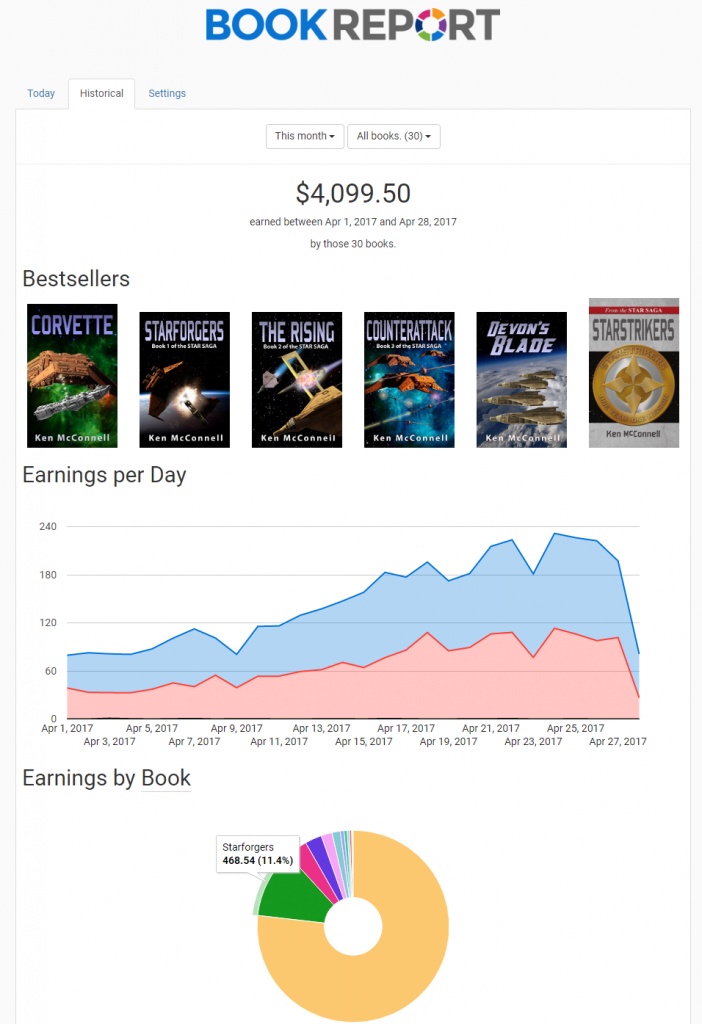 I like this tool because it has graphs and a pie chart and book covers with links to the books. Laying the Kindle Select reads on top of the sales numbers really shows you how they correlate. Select are in blue and sales royalties are in red. I told you being in Select pays!

Also of note here is the widening slice of pie that is Book One of my Star Saga – Starforgers. The thing I want to see is if all those Corvette readers start making their way through the series. This should drive sales more and more as Corvette fades from the bestseller lists. 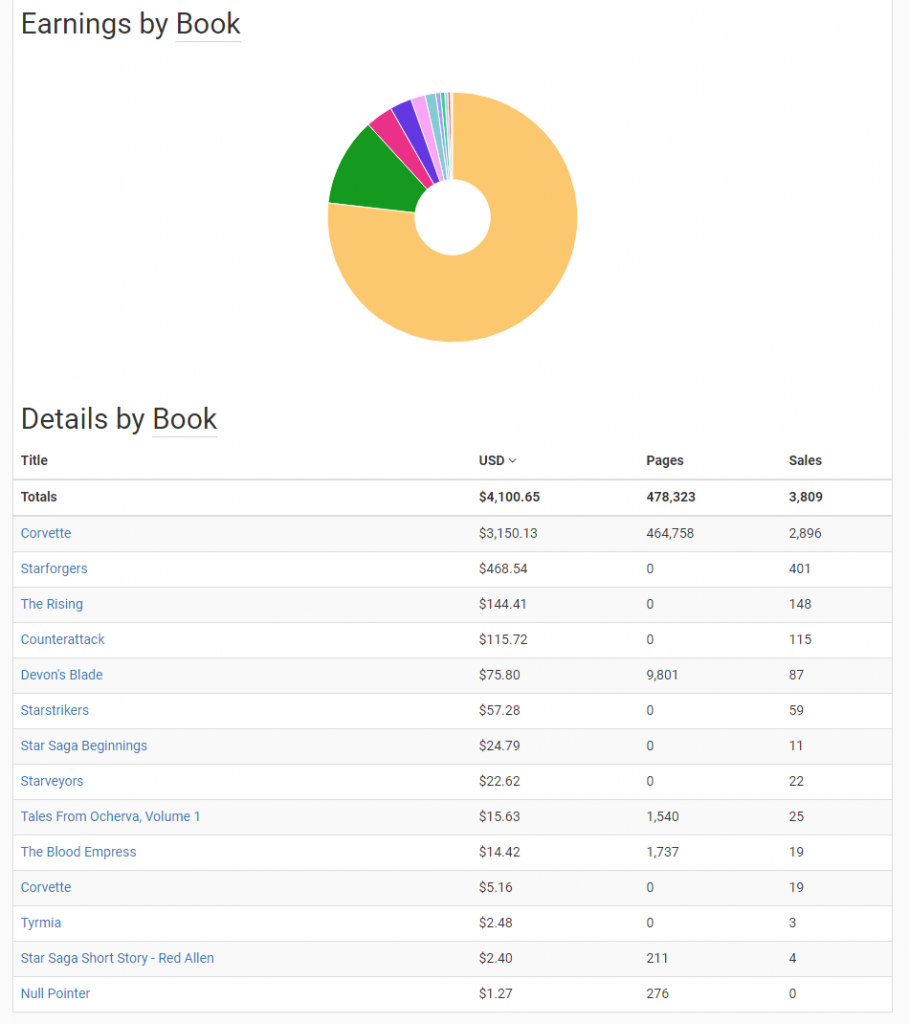 Here is a breakdown of the earning per book for April. Keep in mind that Devon’s Blade, Ocherva and Blood Empress have only been in Select for a few weeks. Their numbers should grow next month.

This is a fun graph from Amazon’s back end that shows my Author Ranking which is a Beta program that compares your sales to others in your genre. It changes hourly. I like it because it shows the rise from obscurity to hit in one month.

The last time my sales took off like this I only had one book out and the whole thing folded in about two months. Now that I have close to a dozen books in the same universe, it will be interesting to see if I can gain a following. Once again, spending a decade writing as many novels might finally bear some fruit.