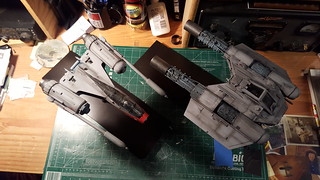 I don’t normally just build random spaceship models these days. I have a plan, as the Cylons would say. That plan is closely related to the cover art of my novels. All the cover art for the first six books of the Star Saga has been completed. I won’t be building any more models of Starforgers Era ships. My focus is on Starstrikers Era ships now. So if you look at my model builds page you can see what has been built and what will be built for each trilogy. If the ship name doesn’t have a link it means I have yet to build it.

The scale of these models is usually 1/350 meaning an average model is less than three feet long. At this time I’d like to build three models in this scale: the GCU Griffin, GCU Sherman and a Votainion cruiser to be named later. These models are usually very large and very costly not just in parts but in time to build. They usually have fiber optic lights and more than one mount point. They also can cost a couple of hundred dollars in model kits alone to build. Not to mention all the PVC and sheet plastic needed to box out their basic shape.

As my skill increases with each capital ship I build, I will get faster and the models will be stronger and will last longer. The last ship I built of this size was the Renoke and it has a metal pipe and wood frame inside. This makes the model sturdy but also very heavy to move around. I will probably build the next capital ship with similar metal pipe and wood framing.  So my woodworking skills will need to improve and I’ll have to explore new ways to build the models as light and as strong as possible.

There are two more starfighters to build in this era, the K’nat and the Tache. I suspect they will proceed just as the last few models of this scale have. They will be built with 1/4 20 screw mounts and possibly lights. These models seem to go together faster and take less resources to detail. Most of the greeblies (model kit parts) used on them are small. They are be built up from scratch using sheet styrene.

There is one more important ship in this era that is the size of the Renoke, and that’s the Nova Starstriker strike ship. Well, I could do the GCU Thrusher, but there are no plans to have it on the covers at this time. Not sure if I will even build the Nova yet but it’s a possibility. Another ship that might be built is the Eclipse. The Eclipse would have to be built to a smaller scale than 1/350 as it’s twice as big as an Alliance carrier. So the jury is still out on that one too. But I do need to build a standard Votainion cruiser warship of this time period.

My next build will be the K’nat fighter and I shall finish the Spieron fighter already started. After that, who knows…