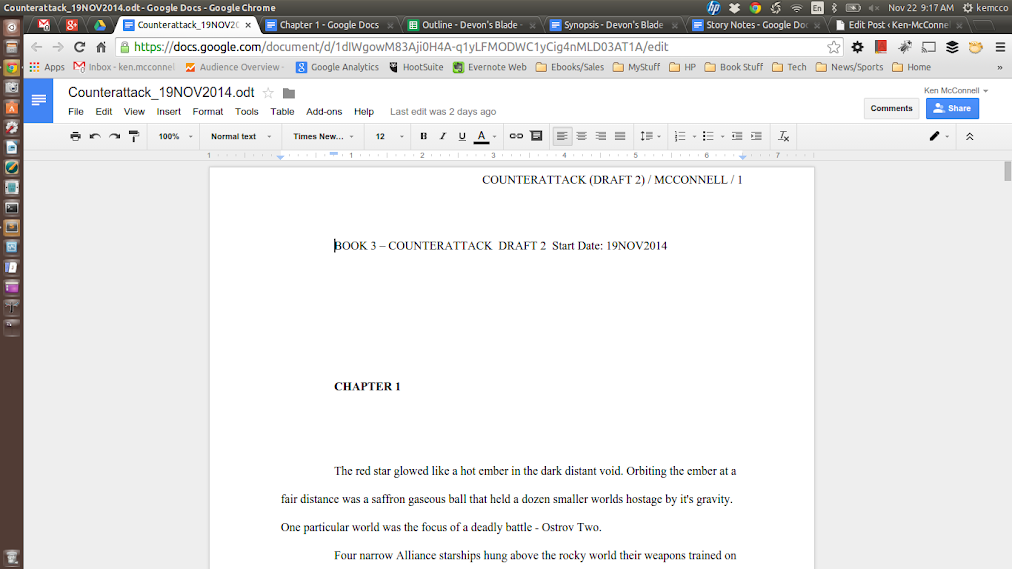 Last week I finished the first draft of the third book in the Star Series. It’s a major hump, but only one of many on the road to publishing the book. I have exported the words from Plume Creator and cleaned up the manuscript in LibreOffice before uploading it to Google Docs for editing. Now comes a lul period, where I try and forget it. This usually lasts about a month. In this case, it may be January before I get back to it. Primarily because I’d like to write a first draft of a novella for the remaining days of 2014. When I come back to Counterattack it will be with fresh eyes and I will fine tune the crude first draft into the presentable second draft which will eventually be torn apart by my editor.

I usually take about a month to polish the manuscript and then hand it over to the editor. He tears it apart and makes sure it makes sense and then I fix all the things he found. Eventually, we make it to draft three and that’s the draft my Beta Readers will see. At this point, the story is pretty well defined, so things that the Beta’s find should not be grammatical or fundamental plot issues. After the I get their feedback is in, I alter the draft once last time, run it past the editor and then rename it draft three. It’s this final draft that will eventually become the finished novel. This is the one that gets copy edited and then transferred to ebook and paperback templates.

This is the final novel of the Starforgers Trilogy, part one of the Star Series. My endgame for this is to have it ready to sell as ebook and paperback late next year along with books, 1 and 2. The novella’s The Blood Empress and Devon’s Blade are also going to be ready next year as ebooks. I’m not sure how I will release them though. The thinking now is that they might be used as incentive to help build my newsletter list. Stay tuned.