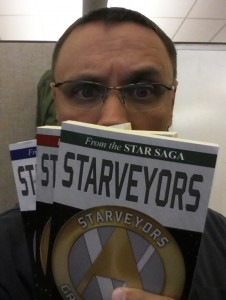 It seems to be taking me forever to write a simple three book trilogy. In fact, I’m crafting a five book trilogy. I have an established numbered book series known as the Star Saga. There will be nine total books in this series. Think Star Wars. These nine numbered books are divided into three trilogies each separated by 500 years. The first trilogy is called Starforgers, the second is called Starstrikers and the third is called Starveyors. I’ve written the first book in each of these trilogies. Now I’m returning to the first trilogy, Starforgers and finishing books, two and three.

I’ve finished Book 2 and will be writing Book 3 this year. It has been taking me a year to write, edit and publish a novel. Last year, I wrote Book 2 and a second novel, intended to fit between Book 2 and Book 3, called The Blood Empress. This year I will also write a middle book set between Book 1 and Book 2, called Devon’s Blade. So when I’m done with this first trilogy I will actually have written five books. So this is what the first “Trilogy” will look like next year:

Each trilogy in the Star Saga will have two filler books between each numbered book. This is to focus the reader on events that take place between the novels and add to the over all story that I’m trying to tell. I was pleased to see Disney taking this same strategy with the Star Wars movies it plans to make in the final trilogy of that series. I must be doing something right.

There are two other primary story lines in the trilogy. One focuses on why the war started from the Votainion perspective through the eyes of the child empress, Nykostra. The other deals with the rising of sentient androids known as Silicants. The Silicant characters are the only ones that span the entire nine book series while the human cast of characters changes out completely with each trilogy.

Currently I’m filling in the outline for Book 3, Counterattack. I plan on doing the outline for Devon’s Blade next so that I can write each book one after the other and finish them before the end of this year. Book 2 and The Blood Empress will be out this fall. By the end of 2015 the first trilogy will be completed and I will take a break from the Star Saga to write something else. When I come back to this universe, I will be writing the fifth and sixth books of the saga and two fillers to go between them.