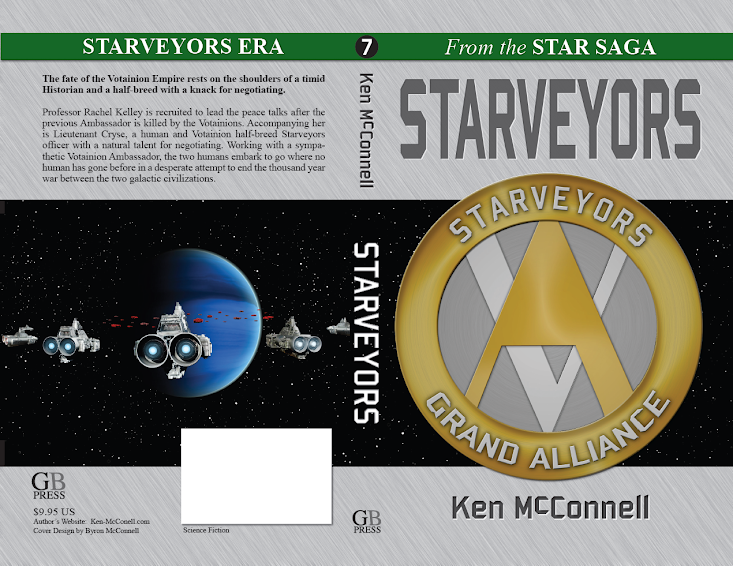 Thought I’d take a moment and update you on the Starveyors paperback. I should be receiving the final paper proof of the book this week. After one last going over it should go on sale sometime next week. This will be the third Star Saga book available in print. So those of you who love paperbacks, now is your chance to own them all.

The above wrap around cover art is nearly final. There is a capitalization offense in the back cover blurb. Can you find it?

There is one final novel left to convert to paperback, but I just don’t have the bandwidth to work on it yet. That would be Tyrmia. It requires an extensive edit and its a very long book, meaning it won’t be selling for less than ten dollars like the other four books I’ve written. Given that I’ve sold a grand total of four paperbacks to this date, there is absolutely no reason to rush any more of my books into print.

June is turning out to be a dismal month in sales for me. Not entirely unexpected given that I don’t advertise or send out review copies of my work. But it would be a hoot if I make it through the month with absolutely no Amazon sales. It would be the first time that has happened in about three years.

Some writers would be mortified by that but fortunately I have a very good day job and don’t rely on my writing to make a living. So basically I don’t care about sales much. At least not yet. Right now all I care about is getting at least one book out each year for the next couple of years. I’d like to get the second and third Star Saga novels out and then I’ll probably write something different. I’ve been in the same universe for three years now and I’d like a change of pace.

There’s another SF book that I would like to write that’s not set in the Star Saga universe. I may finally write that book. Or I could go back to Mystery and write the second Joshua Jones novel. Either one would be a break and would be keep me writing and learning. Which at this pre-discovered time, is just what I need.