Getting through the first draft of The Rising is proving harder than I anticipated. Primarily for two reasons. The first is because this novel’s on the opposite side of the thrills and chills dial than Starforgers. That’s not to say it’s boring, just more focused on characters and android driven ideas. More courtly than swashbuckling.

The second reason is that I’ve accepted a new day job and with it came more responsibilities and well, more work. So my regularly scheduled lunch writing periods have just been halved. I need to find a new time to write on a regular basis. This is almost as disrupting for me as taking a new day job.

My other hobby has been completely dormant in April. I have not touched the GA Sokol model. And now I’ve changed priorities and will be building a new model. We’re moving the model pictures from the back of the Star Saga novels to the front and this demands more action. So the current cover shot will include a starfighter battle using a Vickers Victory fighter and two Eight-fighters. One of the Votainion fighters will be breaking apart in Star Wars fashion and that is the model I am starting to build now. 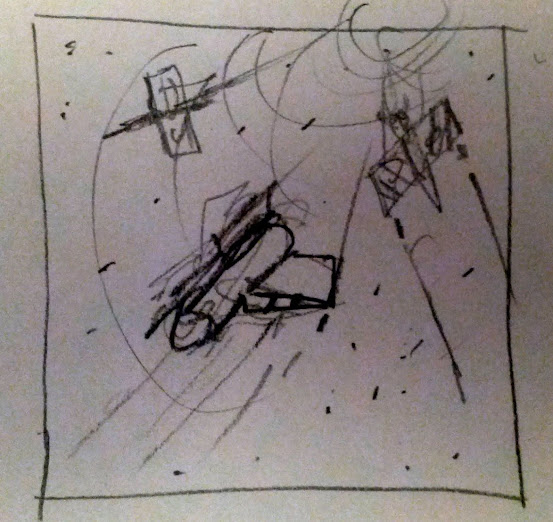 I think we can get away with using the already built Victory fighter and the older Eight-fighter model for the second starfighter in the picture. The above image is a thumbnail of one possible composition. I was going to get rid of the wrap around star field on the paperbacks, but now I’m going to leave it and make the cover art fit that starfield. The unit coin will move to the back of the book.

All of that is subject to change, of course. But that’s the latest plan of attack. I expect to be getting back to work on the first draft this week and spending some time on the weekends building a 1/32 scale Eight-fighter for the cover shoot. I’ll start up a new series of posts on the new model build this week.

Well, that’s what I’ve been up to lately, what about you?