I have recently come across Plume Creator, a one-man effort to create an Scrivener-like IDE (Integrated, Development, Environment) for writers on a cross-platform toolkit known as QT. That’s programmer lingo meaning you can run it on Windows, Mac and Linux.

Plume Creator is being coded by Cyril Jacquet. (No, I’m not kidding you about his name. Cyril is the name of a female alien in my novel Tyrmia. No relation, but interesting coincidence.) 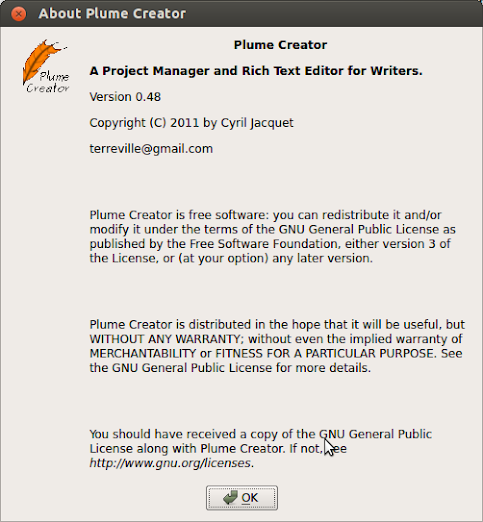 Here’s what the editor looks like when you have a project open and are writing. You have space for notes and a synopsis at the bottom, writing with tabs in the center and to the left you have a timer and word counter. All very useful things to have at your fingertips while writing. 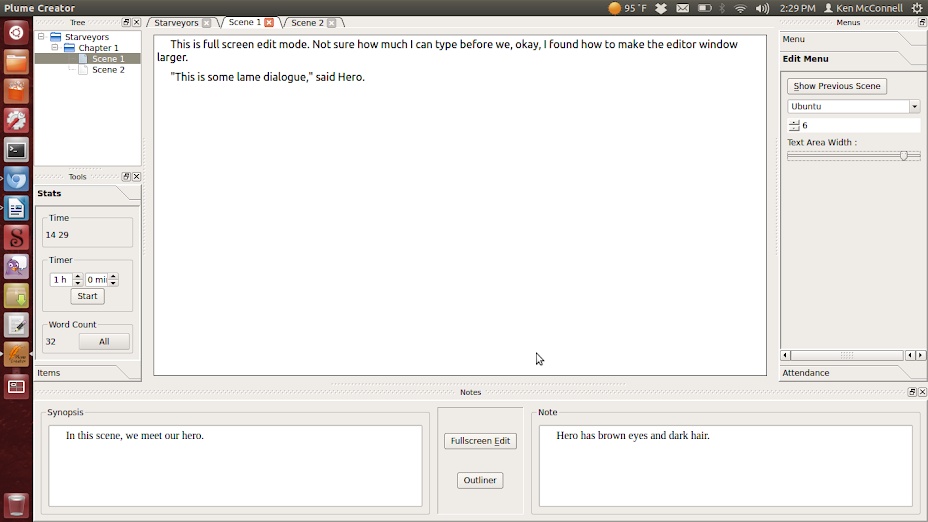 (You can click on these pictures for a larger version.)

Plume Creator unfortunately doesn’t handle the Unity interface of a standard Ubuntu install very gracefully. But if you are running KDE, an alternative desktop, it would look much nicer. Maybe someone will code up a native GTK version if this program takes off. 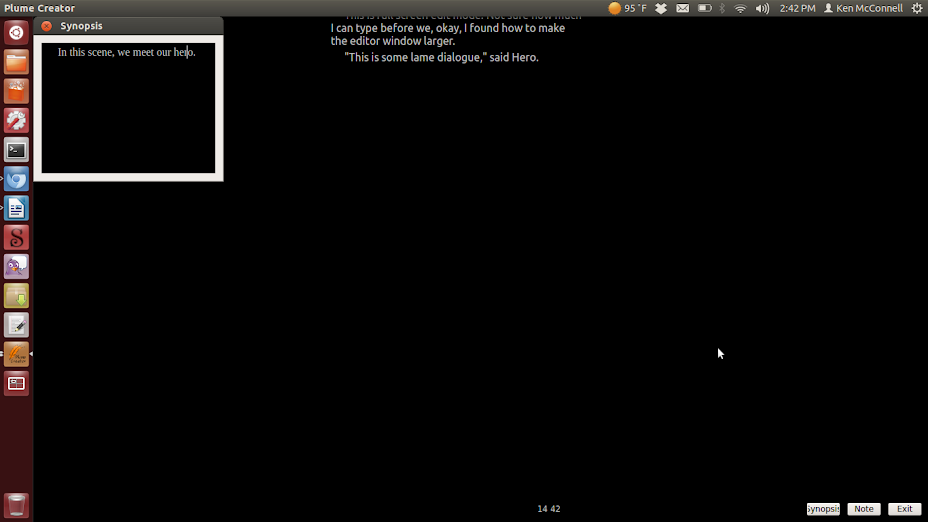 This is what the program’s full-screen capability looks like in Unity. I couldn’t find a way to make the margins larger, so the text is all bunched up in the middle, wasting screen space. I’m not a big fan of full-screen writing, so this doesn’t bother me much. 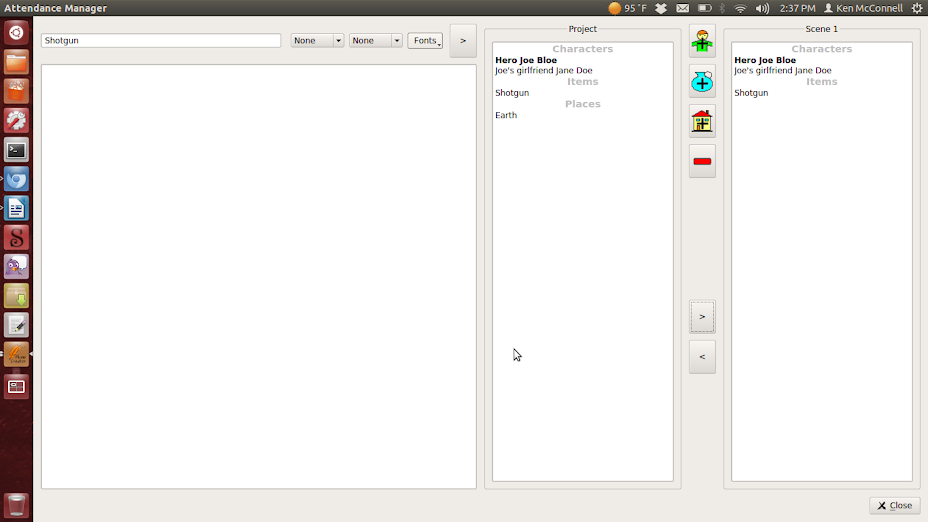 There is a tracking program for keeping up with what characters and objects are in each scene. It’s called the Attendance Manager and to my knowledge there is nothing like it in Scrivener. If you keep up with this as you write, it could be a very useful tool. But if you let it slip or spend too much time fiddling with it, it could become a distraction for you, and wind up working against you. 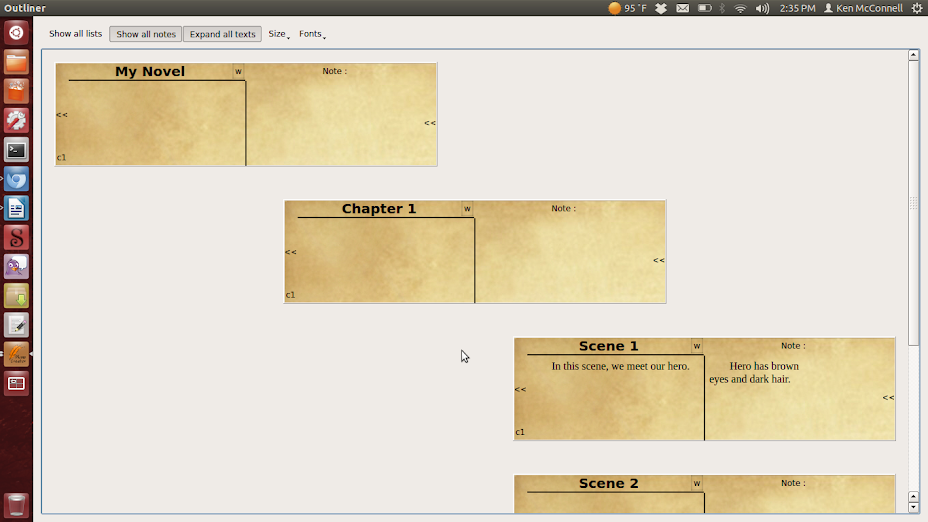 There is a slightly unconventional Outliner that comes with the program. I personally prefer to have a spreadsheet and generally don’t like cork board or antique paper looking interfaces when I’m trying to work. I guess I’m more business than fun with my writing. Some folks love this kind of thing, others don’t. It would be nice to have a more traditional handling outliner or spreadsheet like interface as an option here. 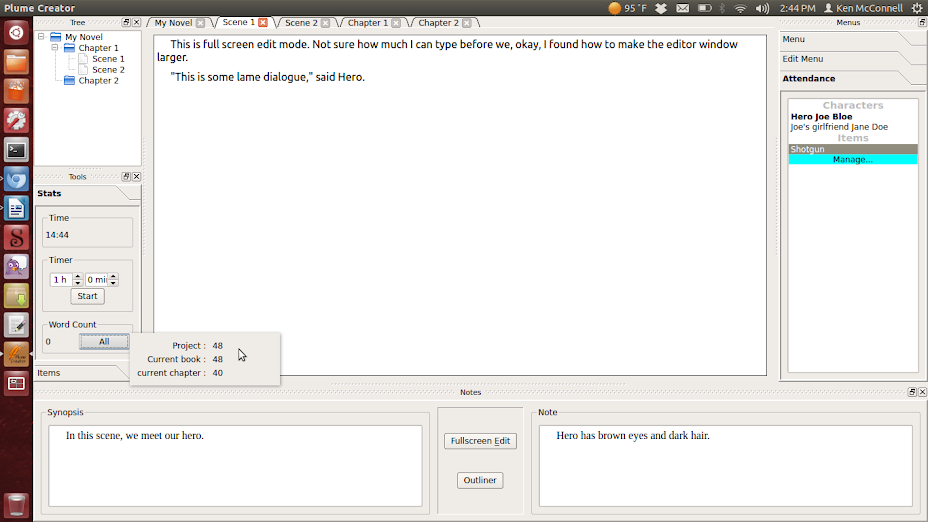 This is how I have set up the main editor set up for my testing. There are some pretty cool features in this program and it’s not even to a 1.0 version yet. I encourage you to download it and take it for a test drive. Let Cyril know what you think and if you are a programmer, I’m sure he wouldn’t mind some help with it.

I’ll be testing Plume Creator a bit harder over my vacation, but I wanted to show it off to you now because I just love that someone has stepped up like this on Linux.

8 thoughts on “Plume Creator a Writing Program for Linux”