Scaling Down My Models

I’ve decided to scale down my efforts at building more starship models. The epic size of the GCU Sokol model has made working on it a real problem. The damned thing is just too freaking big for my house. It has been relegated to the garage for all of its life, because moving it inside to work on is just out of the question. As a result, I haven’t had much desire to work on it. It’s even been assaulted by neighbor kids and mistaken for a robot. 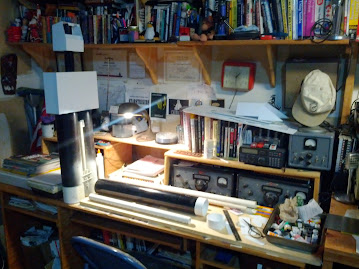 So I’ve decided to scale it down. I won’t destroy what I’ve built so far, I may at some point come back to it. But I won’t be working on such an epic scale anymore. I’ve decided to build  a much smaller version of the Sokol. This will allow me to complete it faster and to build many more starships from my novels. All of them to the same scale, for reference purposes.

So the next version of the GCU Sokol will be built with a 3″ PVC tube instead of a 4″ one. You wouldn’t think an inch in diameter would matter much, but believe me it does. It means the whole model will be under a foot and a half, instead of two and half feet. The neck and hence the Class C sized engine will be built from 1″ PVC pipe. This makes a smaller, Class C vessel much more manageable to build too, which opens up more modeling possibilities in my future fleet. 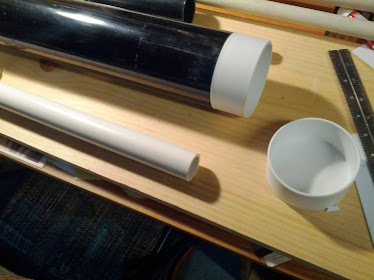 I found these white end caps at Home Depot when I purchased the PVC pipe. They will do nicely for engine nozzles. Construction of this new Sokol model will commence this weekend. The first step is to super glue the two main engines together and then cut and glue the neck pipe on. I plan to do it the same way as the larger one. I will also be looking into a better way to mount the model.