I have a special Sunday evening surprise for followers of this blog. The first glimpse of the cover art for my upcoming novel, Starforgers. This is just a rough thumbnail that imports the new coin into Photoshop and renames the title of the book from the Starstrikers template. 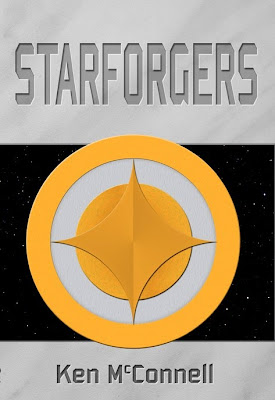 This is not the final version, just a sneak peek at what is to come. A few words of explanation about this and the Starstrikers cover. Starforgers is Book One of the Star Trilogy. Starstrikers is Book Two. The third book will be out next fall and is called Starveyers.

The background of these books is symbolically linked to the three stages of building materials. The first book is Marble and the second book is concrete and the third book is steel. This is to suggest the foundation of an empire. In this case, the galactic empire that this series is about. The concrete on the Starstrikers cover is cracked, representing the dark days of the Great War’s middle years.

The coins represent the three military unit coins for the institutions that the books are named after. The star field is to suggest that the empire is galactic in scale. It also easily brands the books as Sci-Fi with a military edge. The font used also suggests a military story. The coins are shiny and new, representing the hope and belief of the people that they will eventually win the war.

That’s a lot of thought for a book cover, but it’s an example of what you can do when you are an independent publisher. So far, the cover has worked fine for Starstrikers. The challenge will be to make the new book stand out from the second book enough so that the reader catches on it’s a trilogy. I think some subtitling will solve that issue. When you see both books together much of what I just explained becomes self evident.