Yesterday afternoon reports started coming in through Twitter about Amazon’s site having troubles. First it was just with ordering books and then it appeared to be ordering any product was impossible. During the day I snapped this screen shot of my books for sale on Amazon. 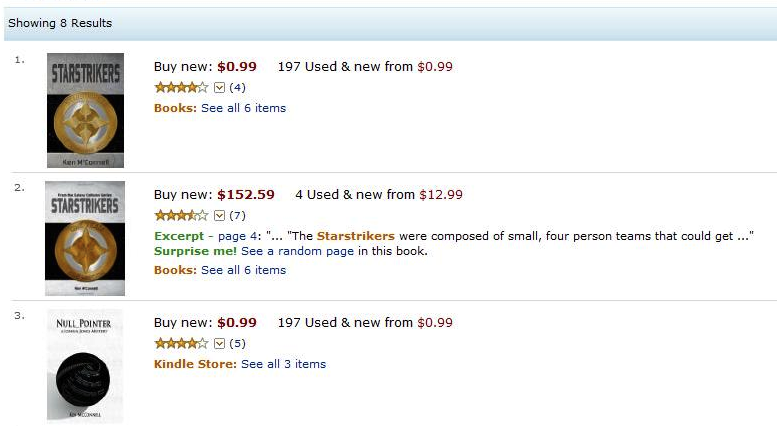 The e-book version of Starstrikers and Null_Pointer both have 197 used and new from $0.99. I didn’t know you could sell used e-books for full price on Amazon. The paperback of Starstrikers, First Edition was a staggering $152.59; witch probably goes a long way to explain sluggish sales of that book. LOL

Access to my DTP page where I track sales of my e-books was blocked last night and this morning it appears as if the monthly totals were zeroed out and it’s only showing yesterday’s sales. Good thing I record daily sales for my own records, or I might suspect that I have had a terrible month so far, when in fact it’s been pretty average.

I don’t know what happened yesterday, some think it was opening up Kindle to all those millions of Android users that may have overloaded the system. I hope things settle down and we can get back to business.