What follows is an overview of how I go about starting a new novel. It’s not a very detailed explanation but it is specific to this novel. I’ll not give away any salient details of the story so as not to ruin it for potential readers. My aim here is to inform you about my processes. I’ll also be updating this blog in regular posts with my progress. I’d like to move rather quickly on this one and see how fast I can conceive, outline and write a novel. I’ll be recording the time spent writing it in a spreadsheet so I will have an accurate account of how long it takes to complete each phase of book construction. For me, a book goes through three stages, Pre-Production – everything done prior to actually writing it, Production – the actual writing of the first draft and Post-Production – everything that happens after the first draft to include editing, proofing and publication. If you know much about how films are made, you will recognize these phases.

Pre-production is everything that happens before I actually start to write. In order to write this novel as quickly and efficiently as possible, I will be outlining it down to the scene level before commencing the actual writing. This is normal for me so I don’t anticipate any difficulty other than doing it much faster than I normally would.

When I begin a novel I usually start a new book in Plume Creator my first draft writing tool. I have areas for the book itself, notes on character, plot and locations. This lets me keep all my written notes in one place right with the actual chapters of the book. Under Plot I create a synopsis page. This is where I start hashing out the overall plot of the book in a few paragraphs. I’m just noodling at a distance, no details and usually just the main character is known at this time. Once I have the overall plot described almost as if on a back cover blurb, I start thinking about the main characters and what changes they will endure. I also start trying to figure out the theme of the book and what will be the original concept. What will make it unique and what about the story will follow common tropes.

This past week I managed to do all the above paragraph in about two hours. I spent a third hour breaking the plot down into the necessary story structure elements needed for a four act novel. This will look familiar to those of you who have read Larry Brooks’ Story Engineering. I use this format for every novel and novella I write.

[ACT ONE] THE SETUP

This novel will follow the current Military SF tropes that are selling for Indie authors.

1. Old captain with an old ship on perhaps a final mission.

4. Happy ending with only side characters dying.

5. Violent, overpowering enemy that prove to be cunning and dangerous.

6. They have to beat the larger, better armed enemy vessel.

If you have read any of the top selling novels in this genre these tropes will be quite familiar to you. They all have a cool looking starship on the cover and many are named after ship classes or starship names. I have followed this convention closely. The name I have chose for this novel is Corvette. A corvette is a small, fast ship that usually escorts civilian ships in a fleet or convoy and protects them from submarines. The inspiration for my starship corvette is the Flower-class corvette’s from World War 2. I have spent time researching the Flower-class corvettes for original source material.

These ships were small, no longer than about 200 ft and had a crew of about 50. They were simple and sturdy vessels that could be build fast in smaller ports and were initially designed to stay in ports to protect them from enemy subs but as the progressed they were pressed into escort duties across the North Atlantic. They usually had one main 4 inch gun and several smaller guns aft.

As part of my research I’ll be watching the films The Cruel Sea and Deep Six as well as reading the novels the films are based on. Both of these films have ships the size of the corvette or slightly larger. In researching naval life and battles I’m looking for interesting bits that are common to all such stories. While my story is set in space and with space ships, they are not much bigger than these sea ships and so I can draw parallels quite nicely. While I have never been to sea in a Navy ship, I’ll have to rely on my research and talking with friends who were in the Navy.

My corvette starship was sketched out on paper and I’ve already started building the model that will be on the cover. Modelling is a hobby of mine and I love that I can use it to prepare unique covers for my SF novels. This model is built to 1/350 scale and will be about 400 ft in length if it were real, but the total living space is about that of a WWII corvette. In other words it’s tiny. 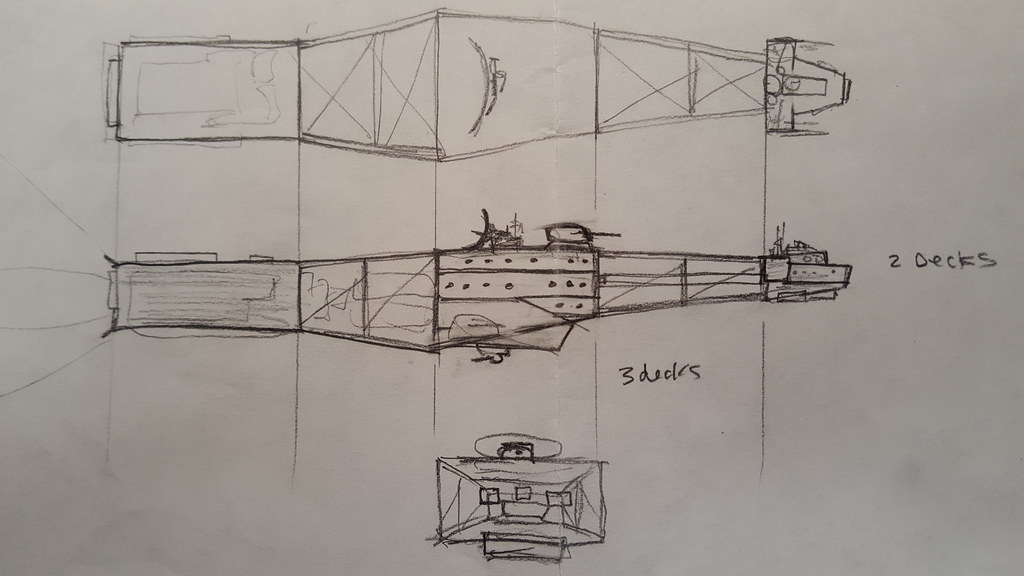 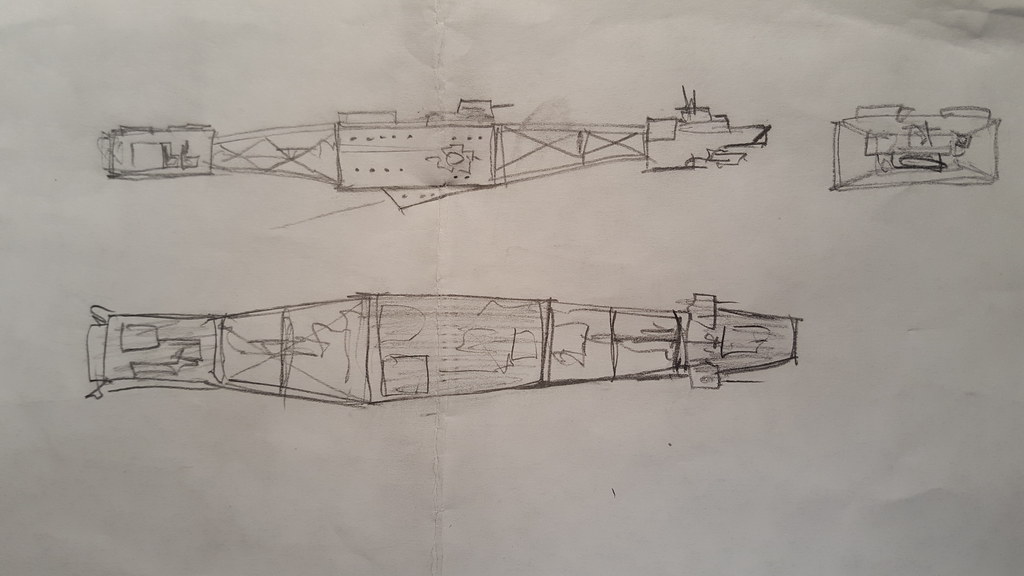 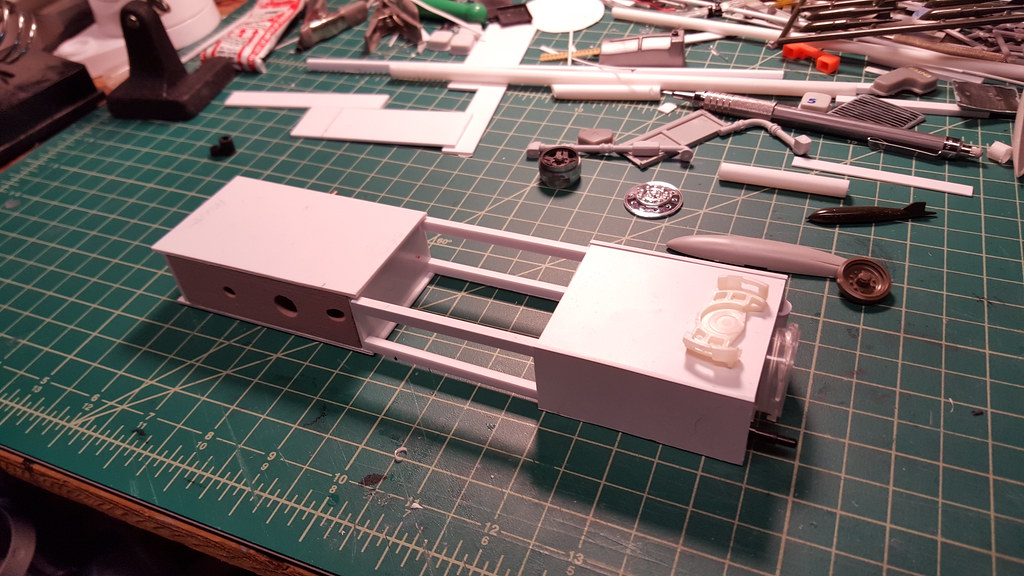 Because this corvette is so small I need a large enemy warship to illustrate how out gunned it will be on the cover. So I will be using my Votainion warship model, actually built to the same scale as the corvette. I hacked together a cover concept that will no doubt change over time but gets my creative juices flowing for writing the novel. 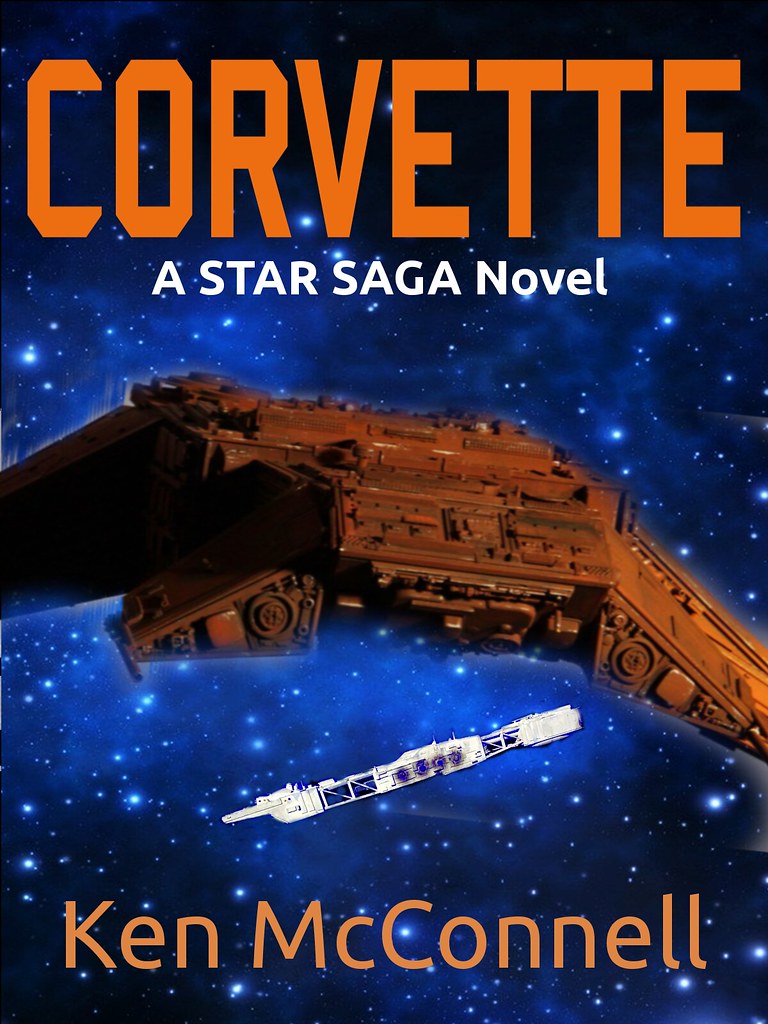 Next up I’ll talk about my main characters and some more about the original source material for the novel.