I’ve completed the first draft of K’nat Trap a novella that follows Starstrikers, Book 4 of the Star Trilogy. This was a fun book to get me back in touch with several Special Forces characters from my very first Space Opera novel – Starstrikers. It stars Kiloe and Tamia from that first novel and it sets up events that will happen in my next WIP, Book 5 of the Star Saga – XiniX. I’m now moving rapidly into finalizing the outline for that book. XiniX will be a full length novel and it will take us to places the reader might have never thought possible. Should be a blast to write, once I get going on it.

I’ve been updating my Pinterest boards for the Star Saga novels this week. You’ll find boards for K’nat Trap and even XiniX. Pinterest is a great site to let fans know the visual inspirations that helped you write your novels. We all have images that we collect while writing our novels and sometimes it’s fun for readers to see what inspired us. If you don’t already use Pinterest you might look into it. Here are the boards for K’nat Trap and XiniX. There are also boards for The Blood Empress and some characters from the Starforgers Trilogy.

Below is a screenshot of the first two paragraphs from K’nat Trap. After I complete the first draft of a book I export it from Plume Creator to LibreOffice for editing. The manuscript stays in an Open Document standard for all edits up until the proof edits. So for the next two drafts I’m working in LibreOffice. Once the final edits are completed, I import it into epub format. That’s where all my final proofing is done. The final product resides in epub until it’s used again to make the paperbacks. 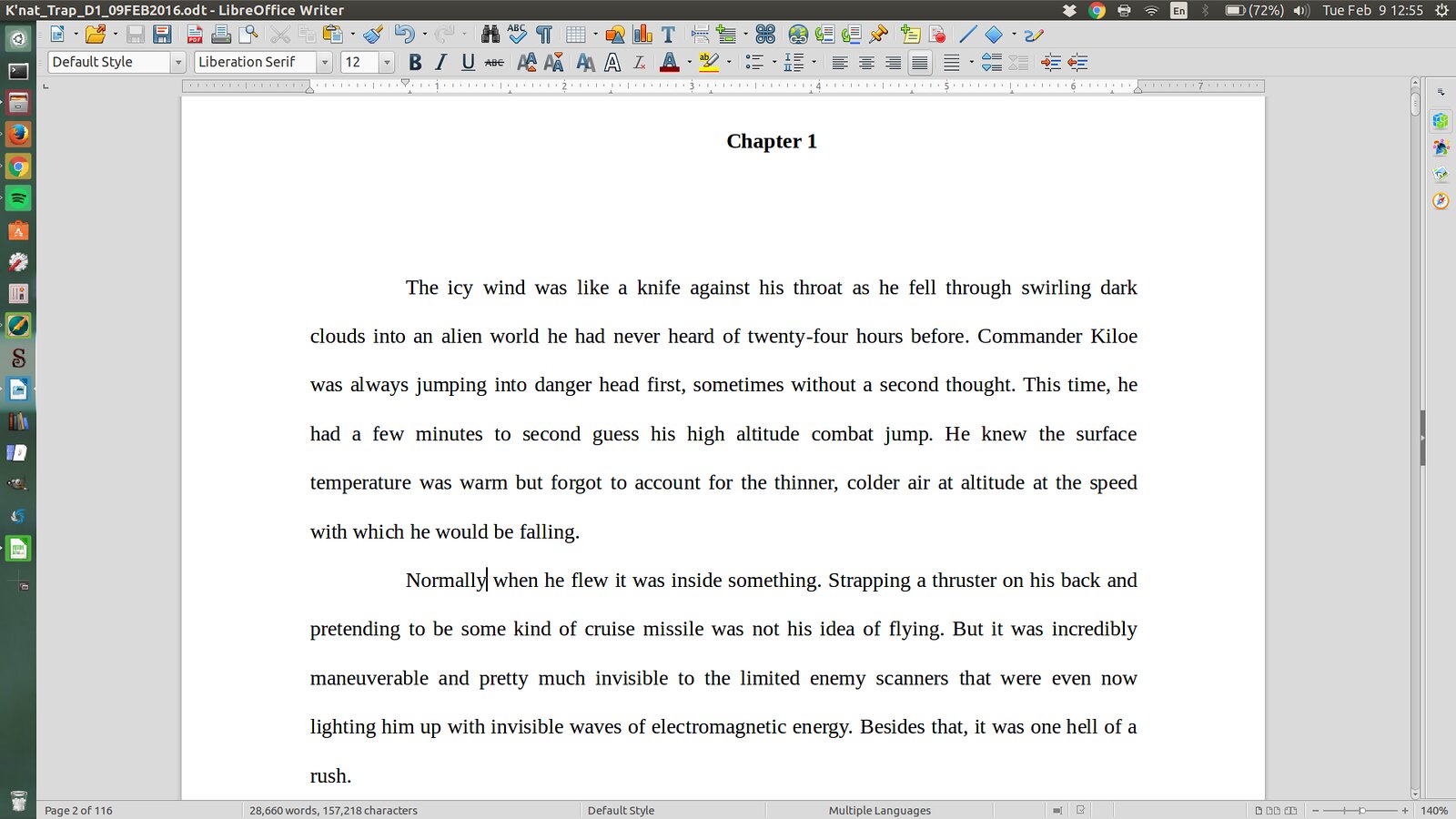 The reason I use LibreOffice is because that program has proper editing features like comments. Sometimes I will take the second draft into GoogleDocs to let Beta Readers read it and comment on it. But the original stays in LibreOffice until it’s finished.

XiniX is now being outlined and for that I usually use Plume Creator, but this book is proving to be unwieldy for me. I have two outlines in plain text form and merging them into one master outline has been challenging. So I’ve exported the Plume Creator outline to a spreadsheet and uploaded it to GoogleDocs. This lets me access it anywhere. No idea how I’m going to get it back into Plume. Most likely I’ll be cutting and pasting it back in from the GoogleDocs.

I would show a screenshot of the XiniX outline, but it gives too much away. Maybe later I can crop it or something so it’s not so revealing.

I usually let a first draft sit for a month before coming back to it for the second draft. This is to clear my buffers and come at the story clean. In that time away from it, I’ll be working on the outline for the next book. In other book related news, I’m about to get the edits for The Rising. The cover for The Rising is just about complete. As soon as my proofing finishes for that book, it will become available on Amazon. Look for it in March. The next big release is going to be Book 3, Counterattack. That could come some time in April.