First off I want to declare two things up front. One, I was 12 when Star Wars came out in 1977, now I’m 50. So, long time fan of the series. Two, I write novels and I’ve even written many screenplays in college. Star Wars inspired me to study Film in college and it still influences the Sci-Fi novels that I write today.

I had a good time watching this movie. I really did. I don’t want you to think I don’t appreciate the effort and creativity that went into this film. Kudos for JJ and Crew for making Star Wars cool again and erasing the memory of the prequels. Much of what was missing from the prequels is evident in this movie. That’s awesome.

I loved the new characters and I especially loved the fact that the protagonist was a woman. I’ve been writing female heroes for years now and I’ve had no complaints from either of my two fans. Both of whom are guys, by the way. I also really enjoyed Finn and Poe as they were fun to watch and were not boring white guys. Three cheers for diversity in casting! Kudos to the new actors who showed more raw talent in this one film then any five movies before it.

I really liked the dialogue for most of the film. I will credit Lawrence Kasden for that, because it really sounded like his Star Wars scripts.

I loved the sound in this movie, it felt like things had mass. Although after seeing the IMAX 3D version, I think Kylo Ren’s helmet weighs about a hundred pounds and is made from solid metal. When he sets it down on the catwalk, it was like he set down and anvil. The SPFX were fantastic especially the frenetic starfighter scenes.

I liked the Maz Kanata character. I don’t care if she lived in a Cantina Bar scene rehash. This one was done much better than in E4 as far as alien costumes go. I liked the music too, and wish they had included it on the damn John Williams soundtrack. Now I have to wait for it to appear somewhere else.

Light saber battle. The Best one yet. Primarily because the sabers looked great and were deadly. People got struck with them and it injured them! The intensity of the final Rey/Kylo battle was awesome. Loved it! But ultimately, we all know she’ll try and get him back to the light side.

Starting with the script. Now, I get that the plot really calls back to E4 and E5. That was pretty much a given for me going into this. So I let that slide. But there were some glaring things in there that made no sense. First up, Poe dying on Jakku. You really needed to trim some CG alien stuff and show him getting picked up by another X-Wing in the desert. Maybe wondering where the TIE fighter was and if Finn lived. (Now I learned that JJ added Poe into the story later to appease the actor. That’s insane. Let me just say that right now. You can’t just write in a character you planned to kill. Unless you add the scene of him being picked up by the Rebels or whatever they are called now.)

In order for Kylo to have such hatred for his father, I needed to know why, like how he got to the dark side. Not sure exactly how to show this but it needed to be there. That was the only problem I had with Kylo Ren’s arc. I liked his anger issues with the light saber and I liked that we got to see his face. I also think his mask and the voice emitter were pretty bad ass. Echoing Vader but his own thing.

Captain Phasma. Okay, there are women in the First Order, both as operators and stormtroopers – cool! But. Phasma got Boba Fetted with a feckless end at the expense of a joke. She apparently will be back in E8, so somehow she got free. I would have liked to see her actually do some ass-kicking or even a quick shot of Finn tossing her into the garbage shoot. They are missing an opportunity for Finn and Phasma to play off each other in future films. Again – mirroring Boba Fett and Han Solo. 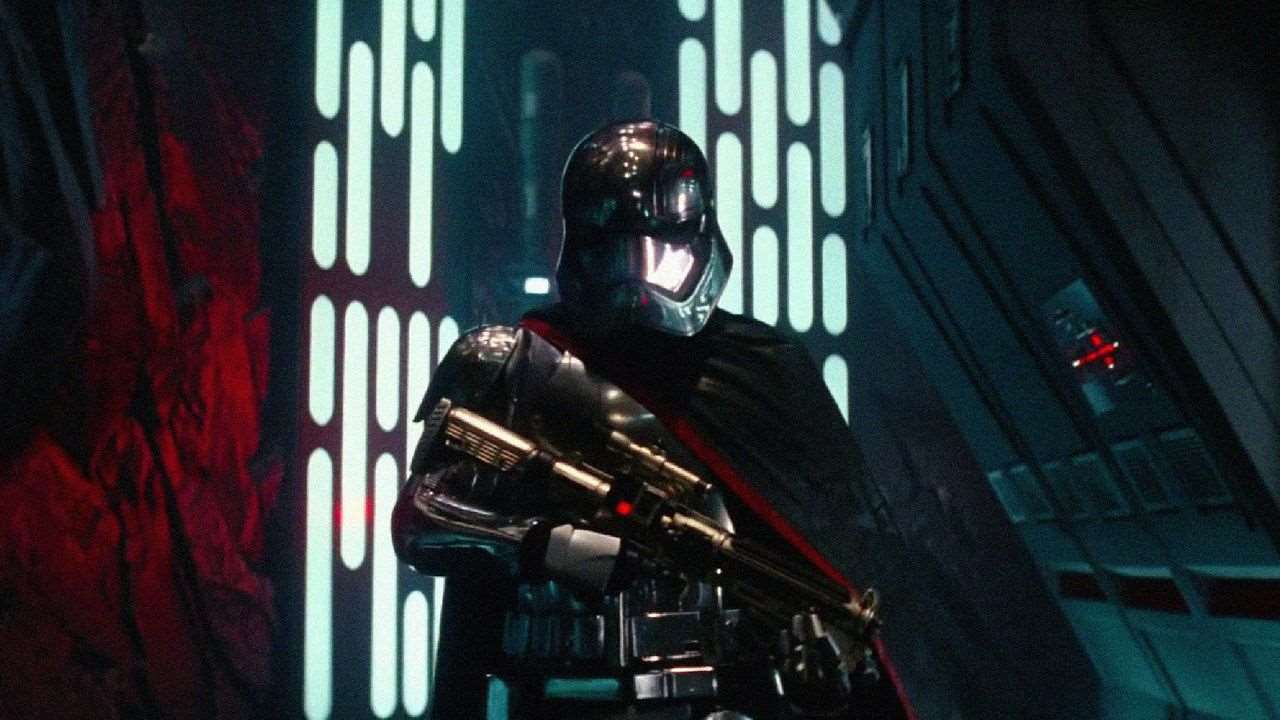 Warning:  avoid the IMAX 3D version because the X-Wings looked like toy models whenever they were zooming towards their target and the camera was behind them. Horrible effect and I’ll never watch another Star Wars movie in 3D because of it. It added nothing and detracted greatly from the realism. If I could have just watched the movie in IMAX and ditched the 3D crap, that would have been awesome.

I think they should have used the Leia/Han reunion to explain what happened to their son in a bit more detail. I would have even had her angry at seeing him again. There was no tension in that scene. Make Han earn the hug. They missed a chance to actually do the banter that made them famous instead of just recall it.

Was I the only person to notice that Rey and Leia had never met before they just hugged each other like old friends at the end? WTF? I get that Leia understood who she was, but other than being a new addition to her team, I don’t get that embrace. Now if she recognized Rey as being her long lost daughter or even Luke’s that would have made more sense. But we were never given that bone to chew.

Finally, Luke. The least paid actor on the film. I think your pay increases when you actually say something. Ironic for an actor who has gained a nice reputation for being a voice over guy. Was it just me, or did he look pissed at seeing the woman who blew up his base and nearly killed his apprentice? Must be me. I mean he doesn’t even take back his light saber. Also, what was with the long walk up a mountain when she could have landed at the top and just stepped off? Symbolism, I suspect. Jedi training for your lung capacity I guess. Which she seemed to pass with hardly a single labored breath. If I had to climb ten of those steps I’d be out of breath. And I’ve climbed mountains here in Idaho, so I have some direct experience here. (I missed the climbing to meet her guru inference. *facepalm) 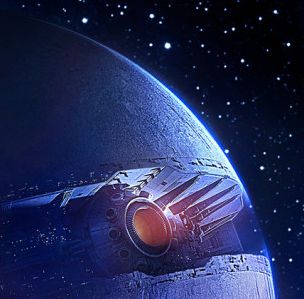 Okay, let’s address the Starkiller Base problem. I get the bigger badder Death Star thing. But it’s not worth the single joke and it’s tiring. This is one area that you really have to let go of any sense of reality. In fact, just go ahead and forget basic astronomy while you’re at it. Technological issues aside, how do you suck the guts out of a star and stick them into a planet? Is Starkiller Base part Tardis? I mean a star is usually way, way, way larger than a planet. The space inside a planet is not big enough to suck enough star stuff to make the star dim. This shows a basic lack of understanding of the scale objects that live in space actually are. JJ Abrams needs to take an astronomy course. Because that’s only the first impossible thing he does with this. Oh, bye the way, you’d need a black hole to suck star stuff out of a star. Maybe there’s a black hole in the middle of the planet? That could work, assuming you could shield all life on the planet from the deadly stellar radiation.

The next impossible thing that happens is that he shoots planets that I have always assumed were spread out in the galaxy with a beam of destructo plasma from the base. In order for those three or four planets to be seen getting blasted in the sky of where ever Maz Kanata’s planet was, all the Republic worlds would have to be in one star system. Now maybe that’s the case and the Republic is now just down to one star system. But I sure don’t get that from all the other movies in the series. I always thought Star Wars was played out on a galactic scale. Otherwise, why have Hyperspace drives?

Oh wait, they never called it that in this film! They never said let’s go into or out of Hyperspace. They just said Light Speed. Which would work great if all your inhabited planets lived in a single star system. Hyperspace is a worm hole or space warping concept that lets science fantasy do this kind of crazy time and space shifting on a galactic scale. Otherwise you’re stuck in a single star system and you’re doing regular science fiction stories.

Snoke. Yeah, that’s a hologram. I hope Luke is running it. Otherwise, it was not original enough to be a decent bad guy character.

Random Tidbits, Some Good, Some Bad

Because I saw it first in a regular theater, I know the SPFX look great when not spoiled by 3D. I loved the crazy flying Rey did to the Falcon when she first flew it. That made my stomach turn. No! Don’t destroy the Falcon! LOL I also liked Solo’s bad ass landing in the snow.

First Order TIE fighter. Cool. I like the look, black with white vanes and a red stripe. Was not sure I get where the engine actually is if it has a rear gunner. I guess I have to see a model or something. Where are the Ion Engines? On either side of where Finn sat?

New X-Wings. The engines make no sense as a turbine. But whatever, this is fantasy. I like the Ralph Mcquarrie inspired update. The nose if way less phallic, so that’s a bonus. Not sure why Poe’s fighter was black. Were others black? Guess I’ll wait for the DVD and slow those dog fights down.

Stormtroopers. I like the new look and I like the white on their guns. Excellent iTroopers. I also really like that when someone hit them with a blaster, the poor troopers went flying like they were hit by a rail gun or something. No more just falling down dead. Part of what made the trooper’s deaths so powerful was the sound and look of the laser bolts. Deadly. Loved that.

I really loved BB-8 in the part of R2-D2. I don’t see how you can have three side kick droids in future films and it explains why R2 was left in a robot coma for the whole film. I guess that shot of Luke’s hand on R2 was him turning off the droid. The whole map thing has issues too. Not to mention reminding me of Indiana Jones. Follow the red dots to Skywalker. It would have been better if Luke’s part of the map was off to one side of the known galaxy instead of right in the middle like some kind of puzzle piece. 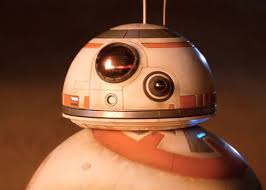 I saw this movie with my two sons, the youngest was 12, the same age I was when I first saw the original Star Wars movie. He liked it a lot as did his older brother. Sure, we talked about the bad bits above, but over all, they still loved the movie and so do I. I’d rank it just above E6, primarily because of the Ewoks. My top three Star Wars movies are E4, E5 and E7.