(WARNING: This is a detailed look at the nuts and bolts of writing this novella. If you don’t want any plot spoilers, please avoid reading until you finish the book. Also – writing neepery ahead!)

My latest novella, Devon’s Blade is now available on Kindle. It was the first book I wrote on Google Docs. I usually do all my first drafts in Plume Creator on Ubuntu Linux, but for this short novella, I wanted to try using Google. Primarily I wanted to see if I could write on a Chromebook. Not all of this novella was written on a Chromebook, most of it on my laptop, but I still used Google Docs which is a web based writing tool.

I didn’t just write the book in Google Docs, I also organized all the files I’d need into one folder. The idea being that if I needed that piece of research or that photo for reference, it would always be with my writing files. When writing I usually had lots of tabs open for notes, the chapter I was writing and images I was using for inspiration. 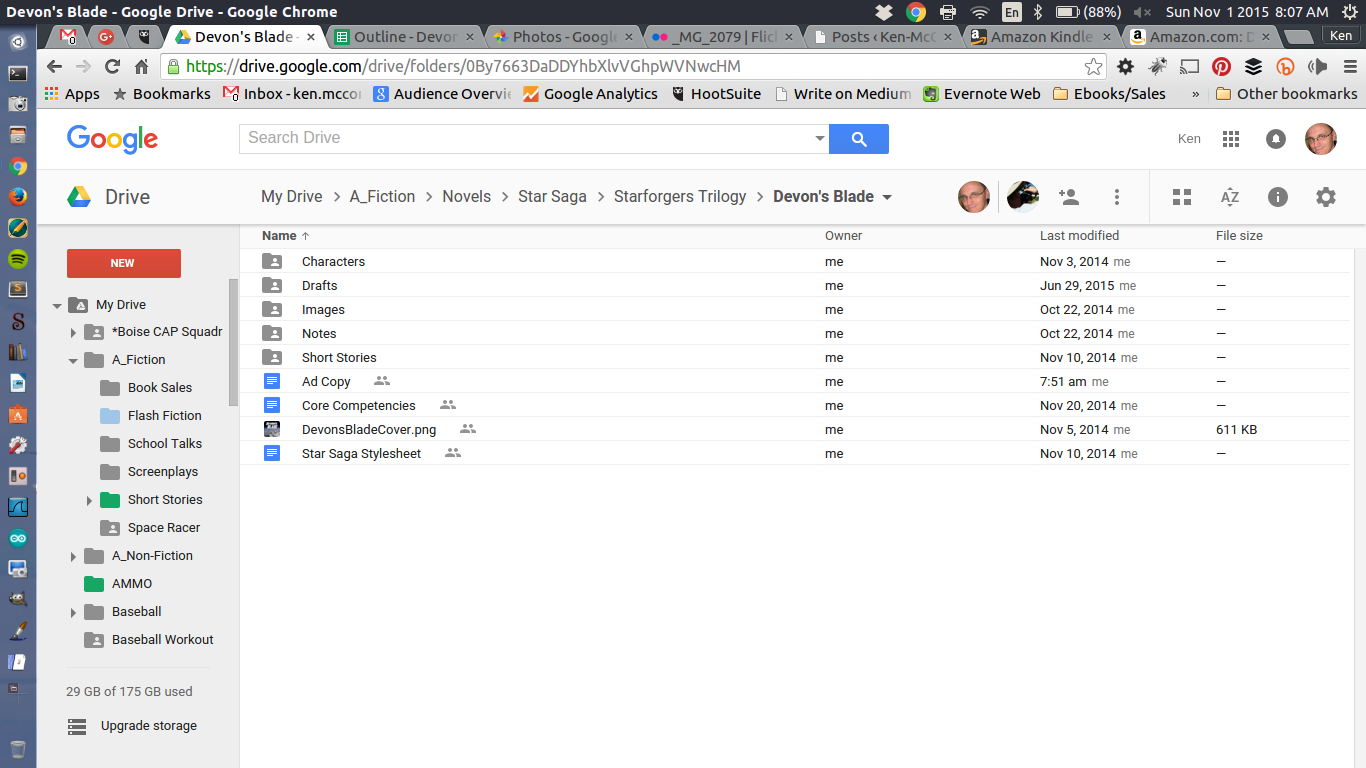 This shows my top level folder structure for the novel. The Short Stories folder was for the reference short I wrote called Ambush! which was written from the enemy’s point of view and set on the same planet as my novella. Handy for reference. 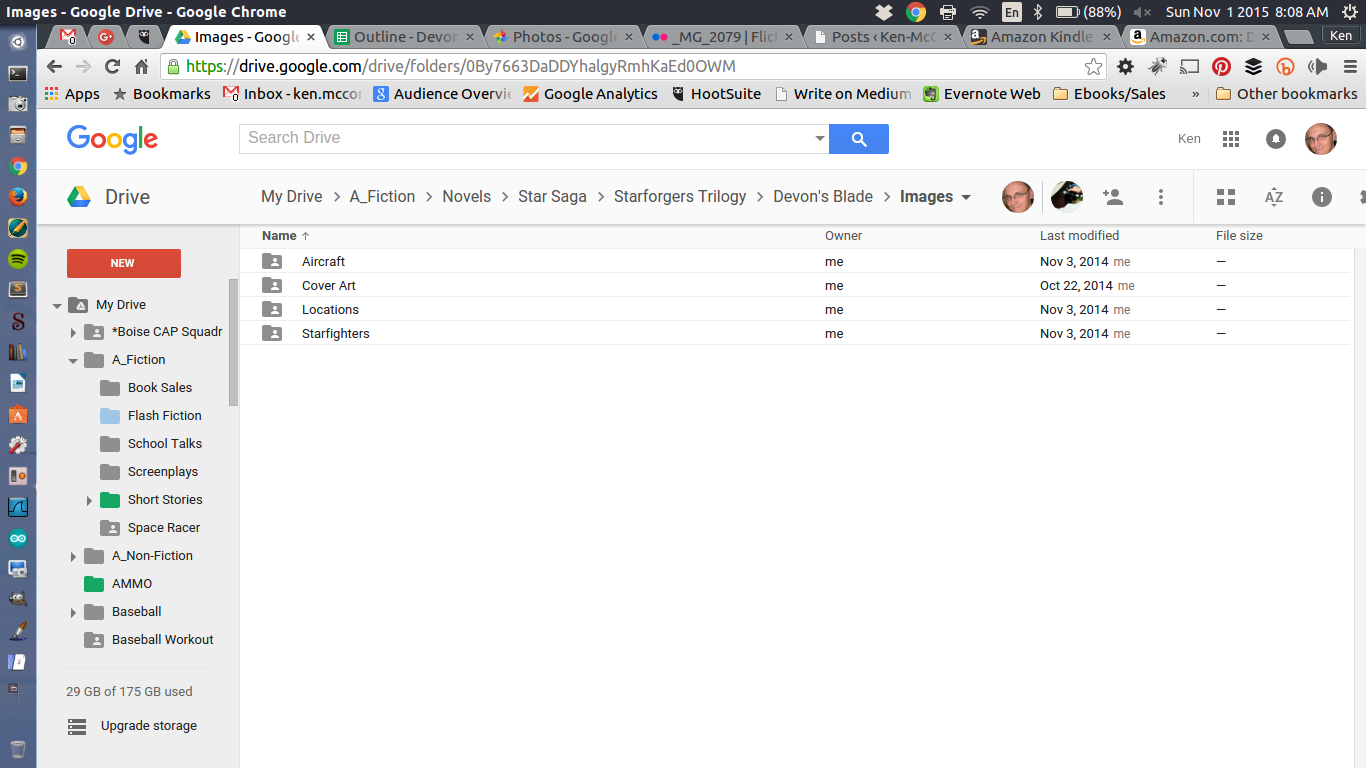 In the Images folder I broke things down as shown. One of the big influences for the Swift starfighter that my heroes flew was the Bell X-1 cockpit under Aircraft. 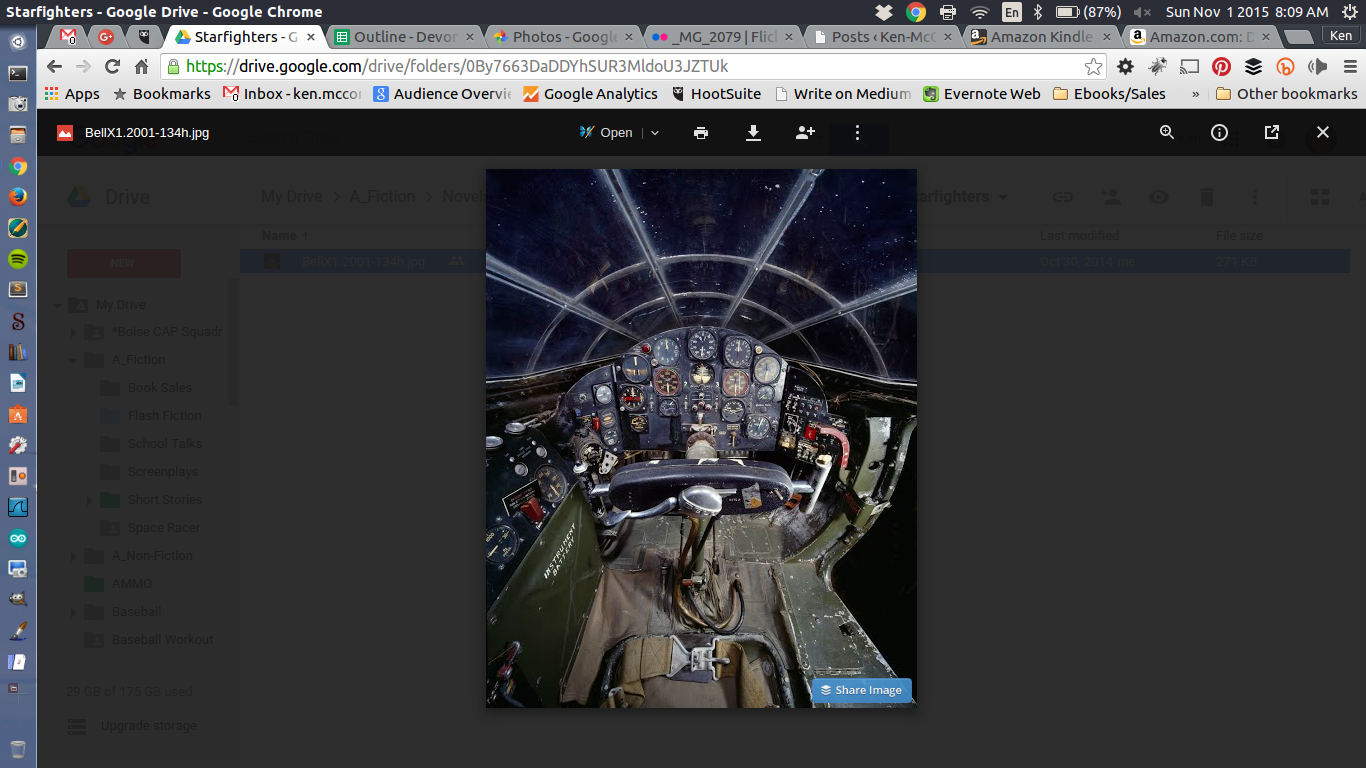 Under Characters I had some images of female fighter pilots and under individual character folders I had an image of a pilot that matched what I imagined they looked like. 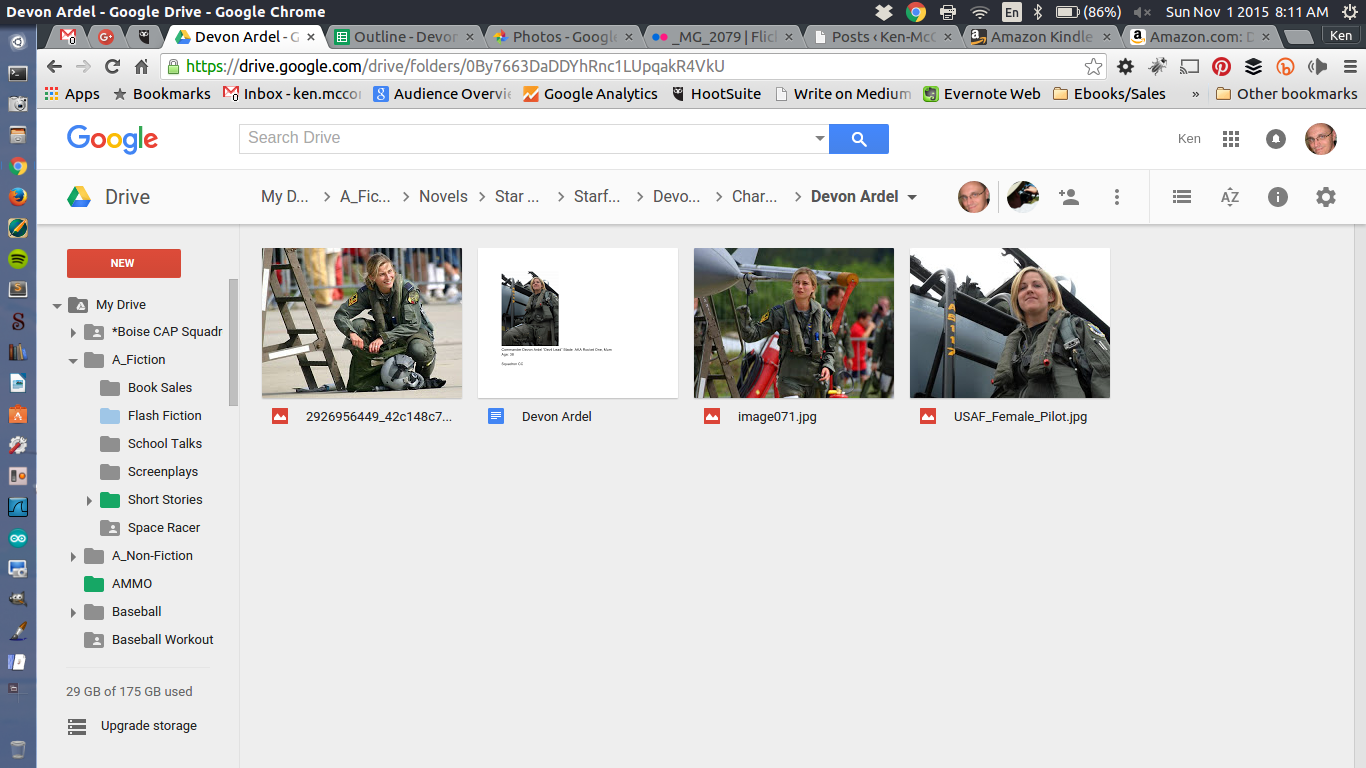 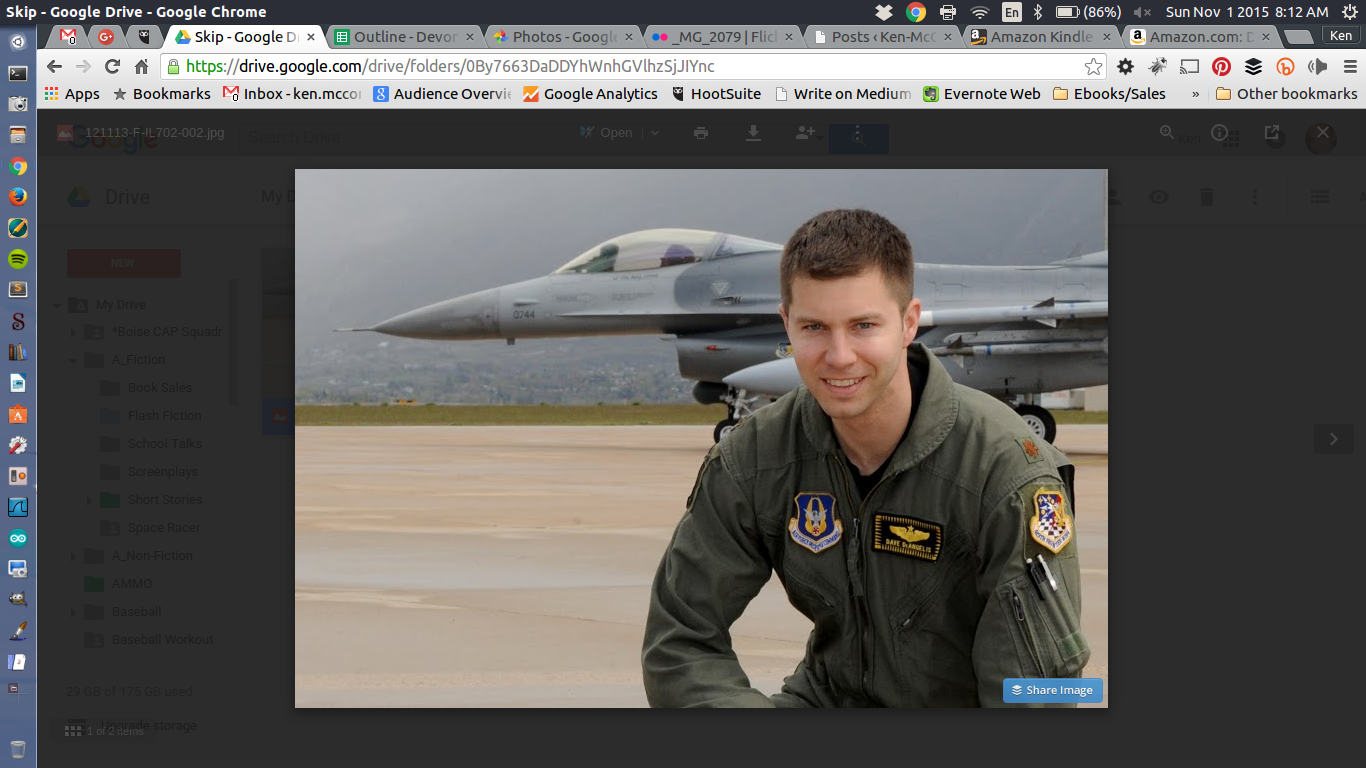 Above was Skip, one of the pilots. Below is Chief Spanner, who was inspired by the look of an actual AF Chief. 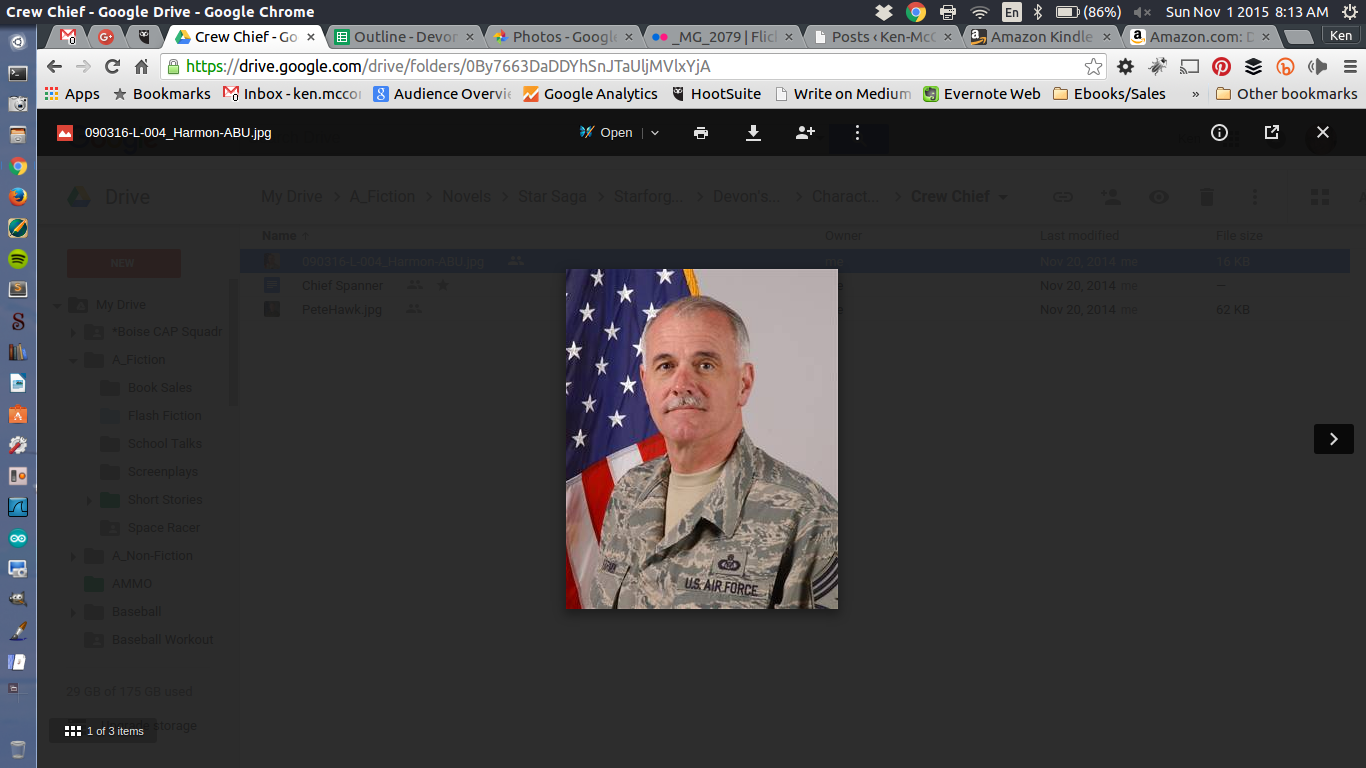 Here’s some inspirational pics of islands and huts and such, since it takes place on an island. 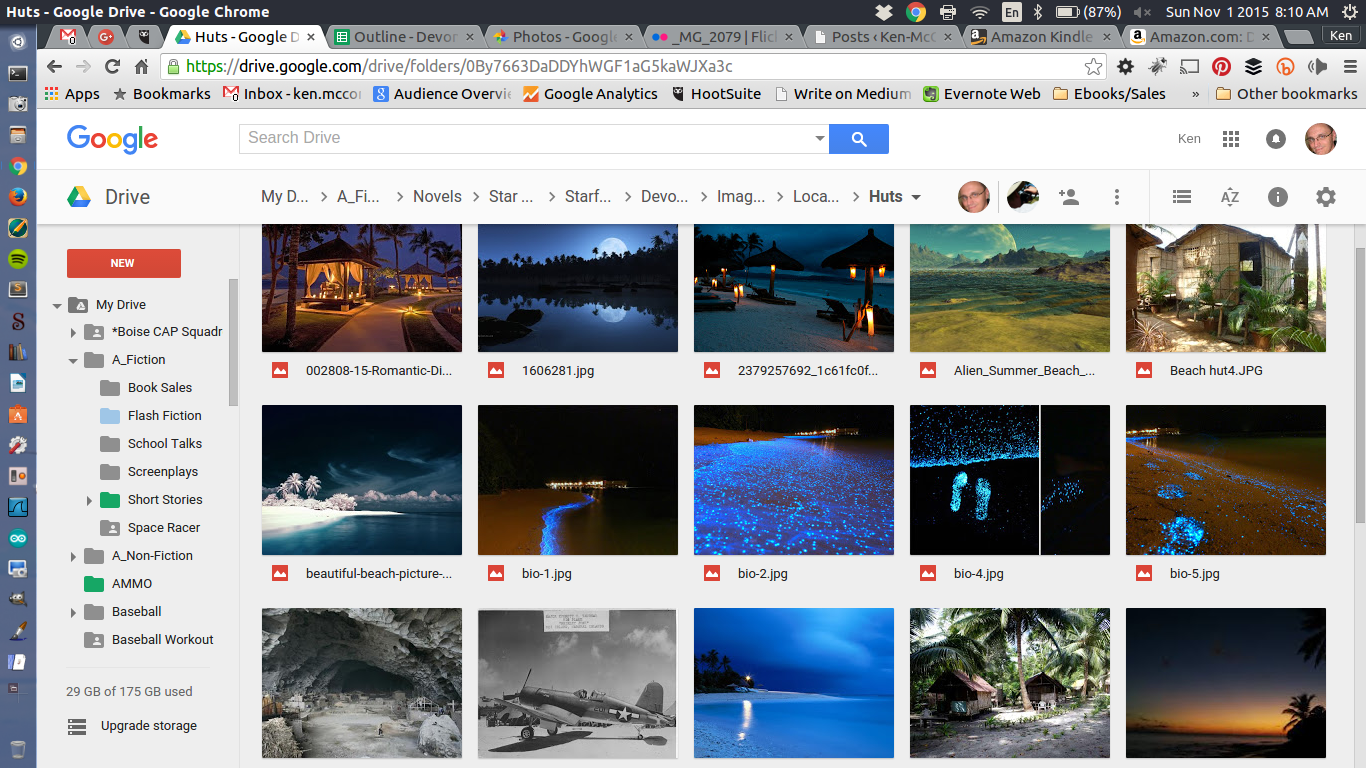 I even did a rough Gimp version of my cover idea using an older model I had made from cardboard. For the finished cover I actually built my own model and photographed it. My brother, a graphics artist and Photoshop artist combined it with a background and some fonts to make a real cover. But when you’re writing, it’s fun to have an idea of what the final thing might look like. 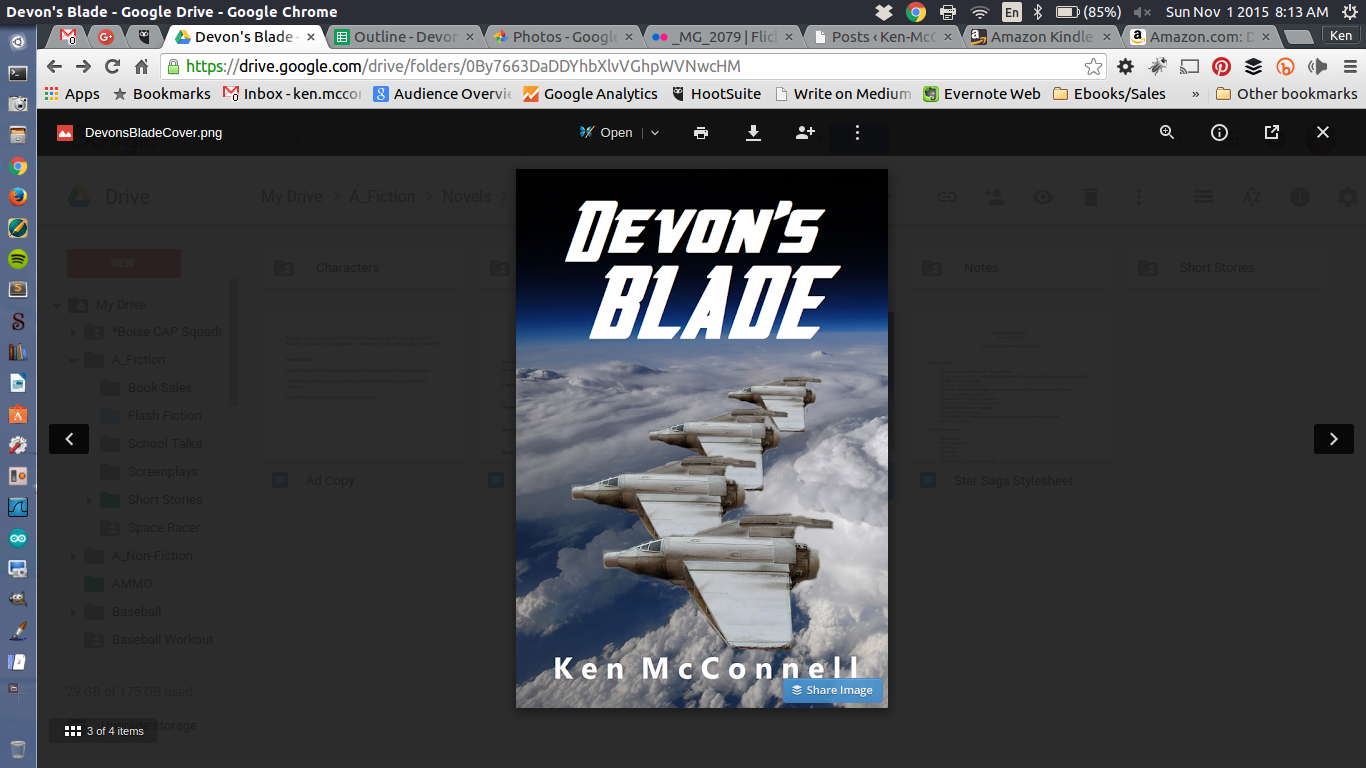 In order to keep tabs on my cast members, I created a tally sheet and marked it up whenever one of them died. (Spoilers!) 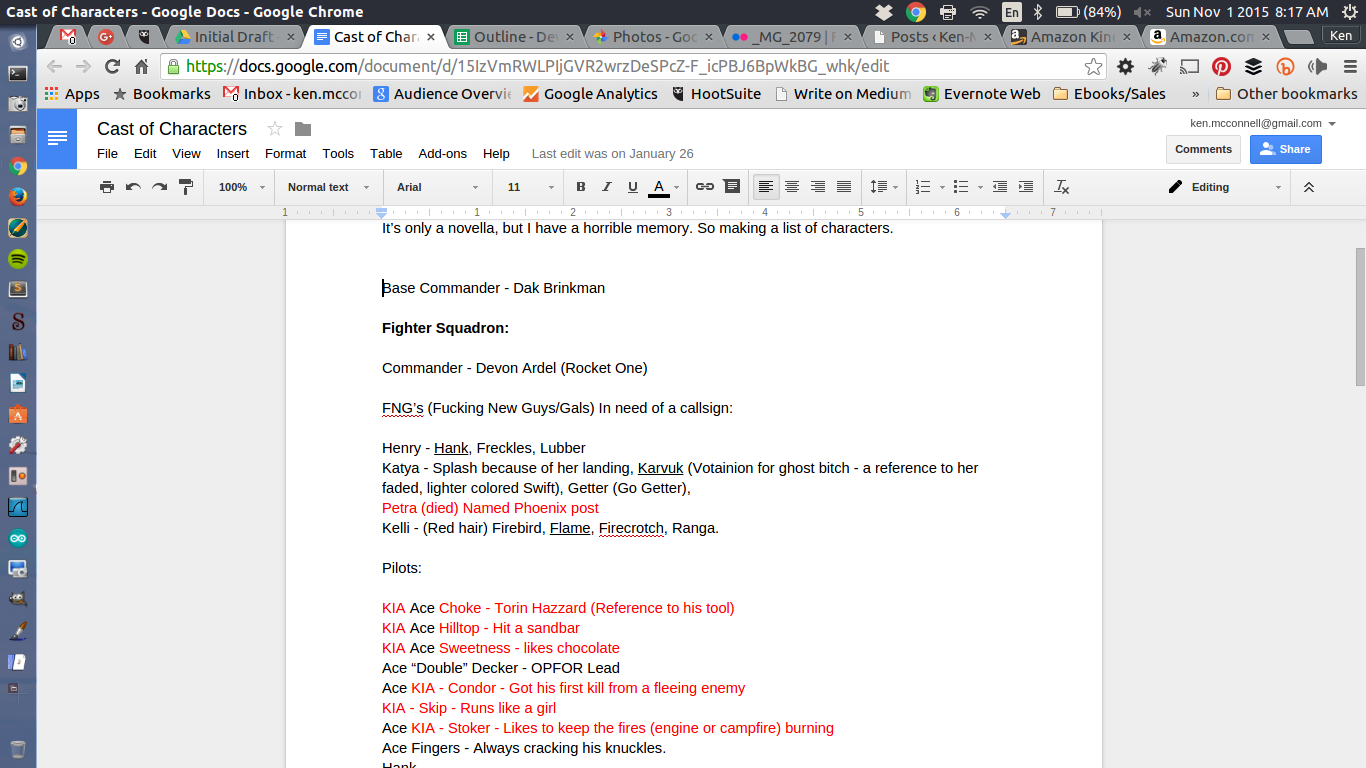 Below is a listing of all the notes I used. Lots of fighter pilot lore and vocabulary was used in the book. Some of it I gathered from research on the internet, lots of it I absorbed by reading many non-fiction books about fighter pilots. 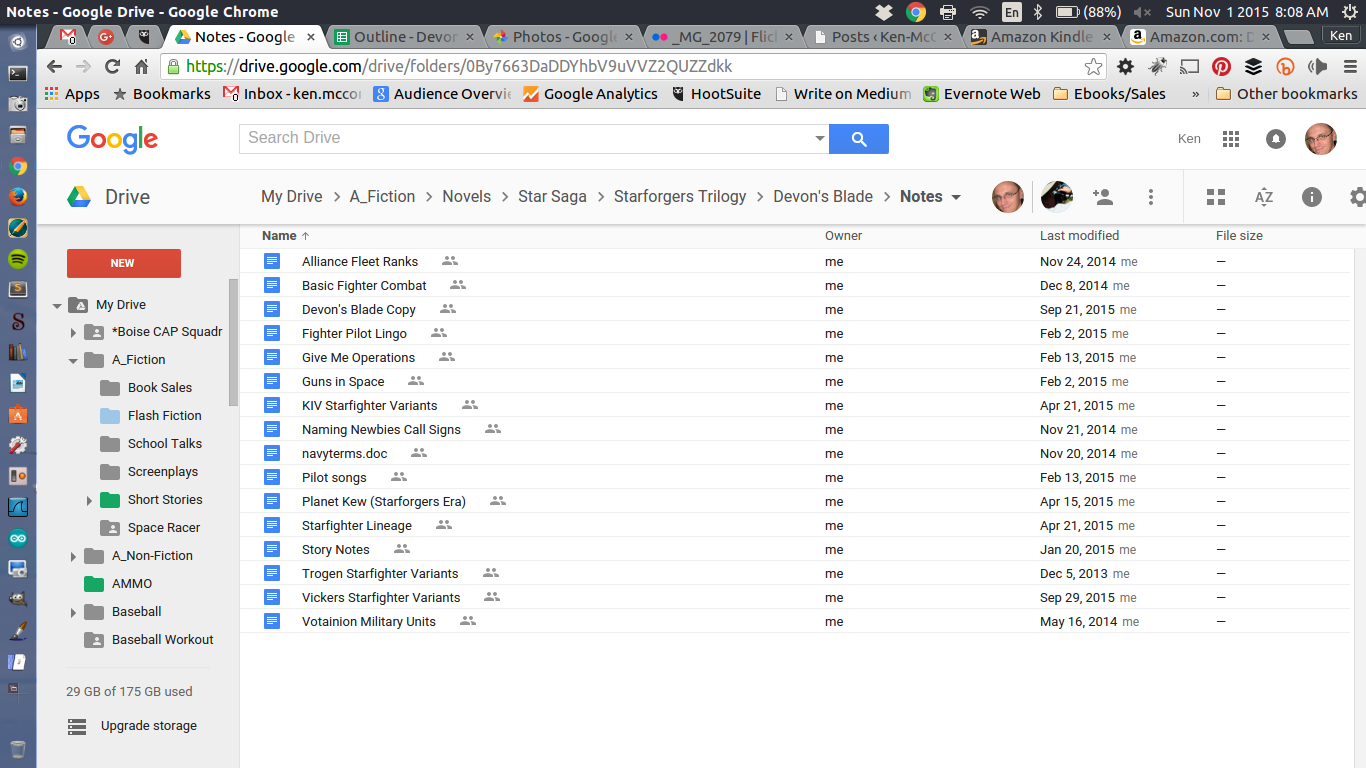 I listened to a ton of fighter pilot songs while writing this book. Everything from the Korean War to Desert Storm. One day I’ll do a post on the music that inspired this book. Needless to say, there is a lot of music about pilots out there and most of it is NSFW. While actually writing though, I mostly listened to instrumental music from war movies and the new Battlestar Galactica TV series. Speaking of which, my main character – Devon Ardel was created long before Kara (Starbuck) Thrace and when that rebooted TV series first aired I was like, “Hey, they renamed Devon!”.  At the time this story takes place, Devon is in her late thirties and higher in rank than when I first started writing about her in Space Western short stories. If you read Starforgers though, I believe she’s smoking a cigar in one scene. Again, been there done that before it was cool.

It all starts with a synopsis and below is what I wrote before I started. 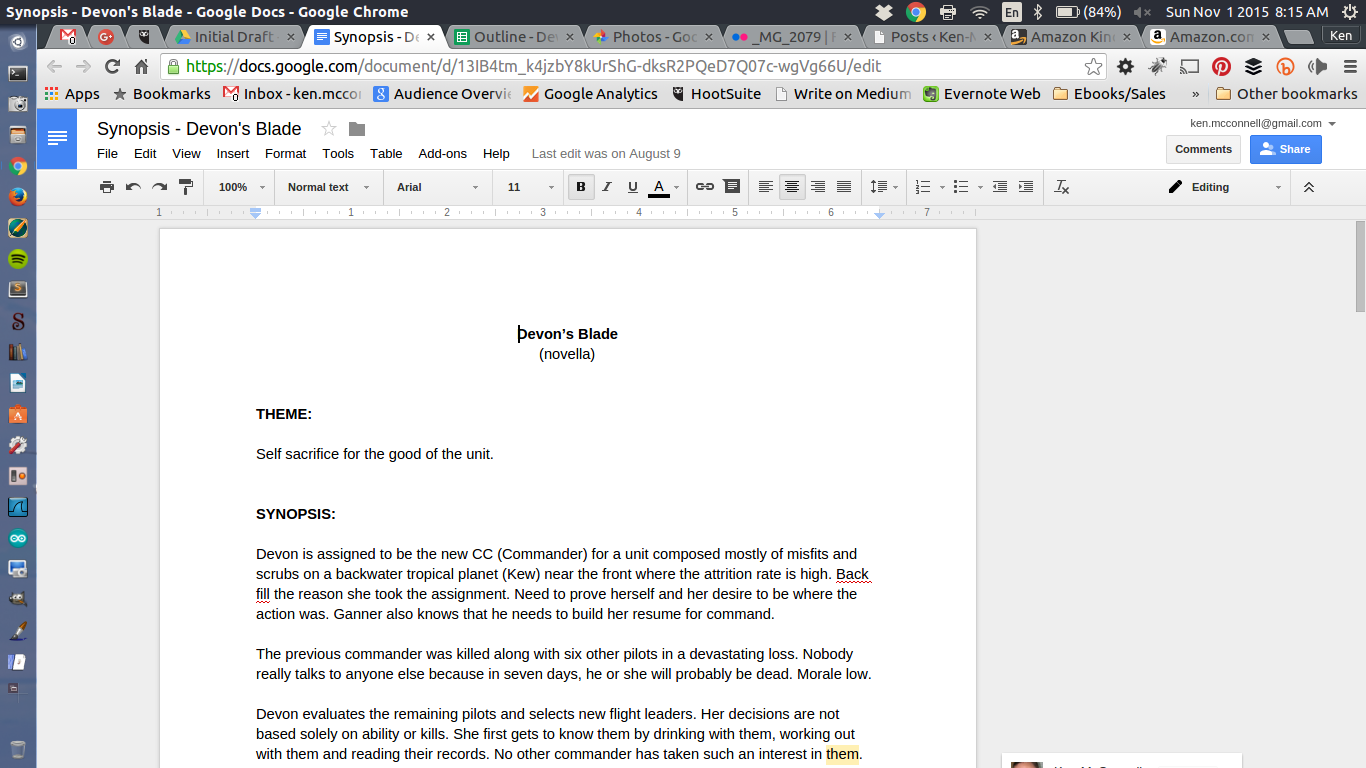 After I have a rough outline of the plot, I start making an outline. Below is the actual outline complete with word count tallies and scene structure. Sometimes things change in the outline, but I never start writing without something outlined. 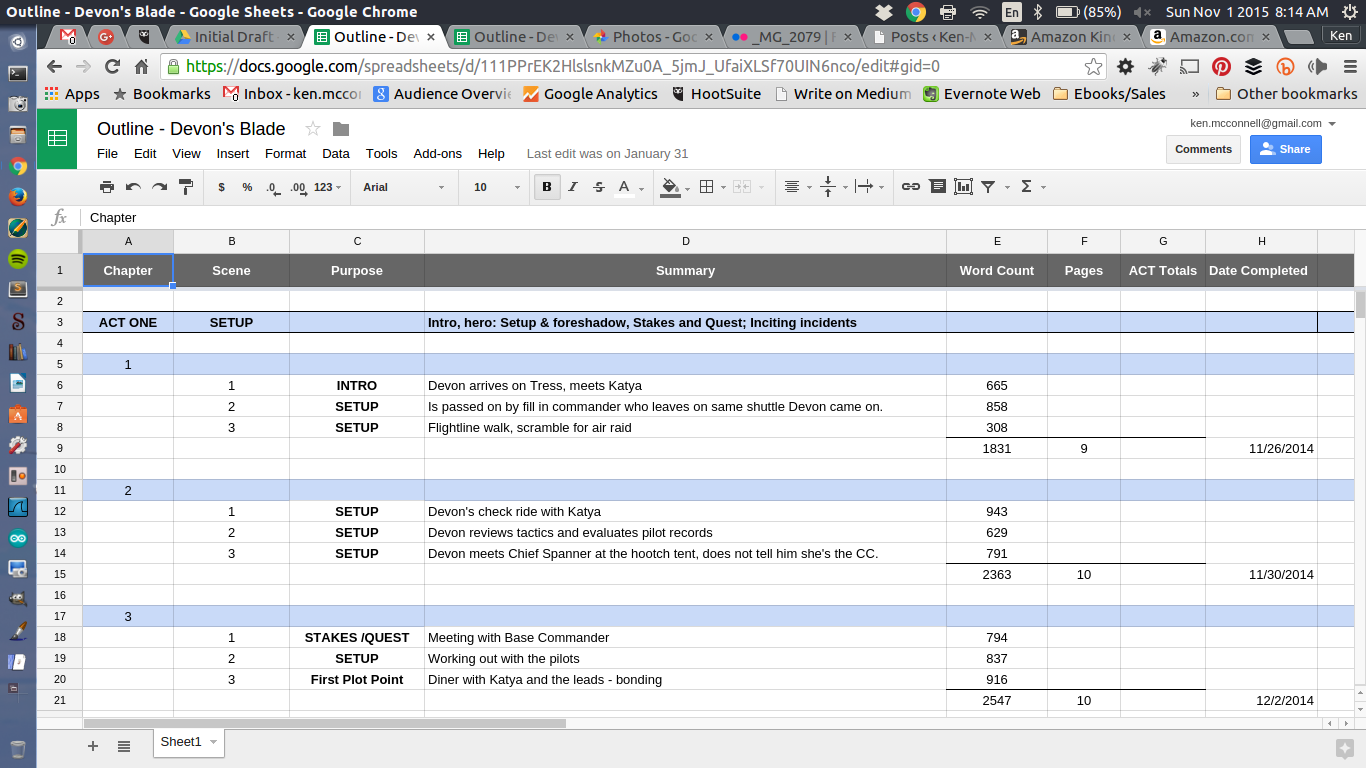 Writing the chapters was pretty much like using a word processor. Pretty straight forward. I wrote them in separate files so that I could open them in tabs and refer to them easily. 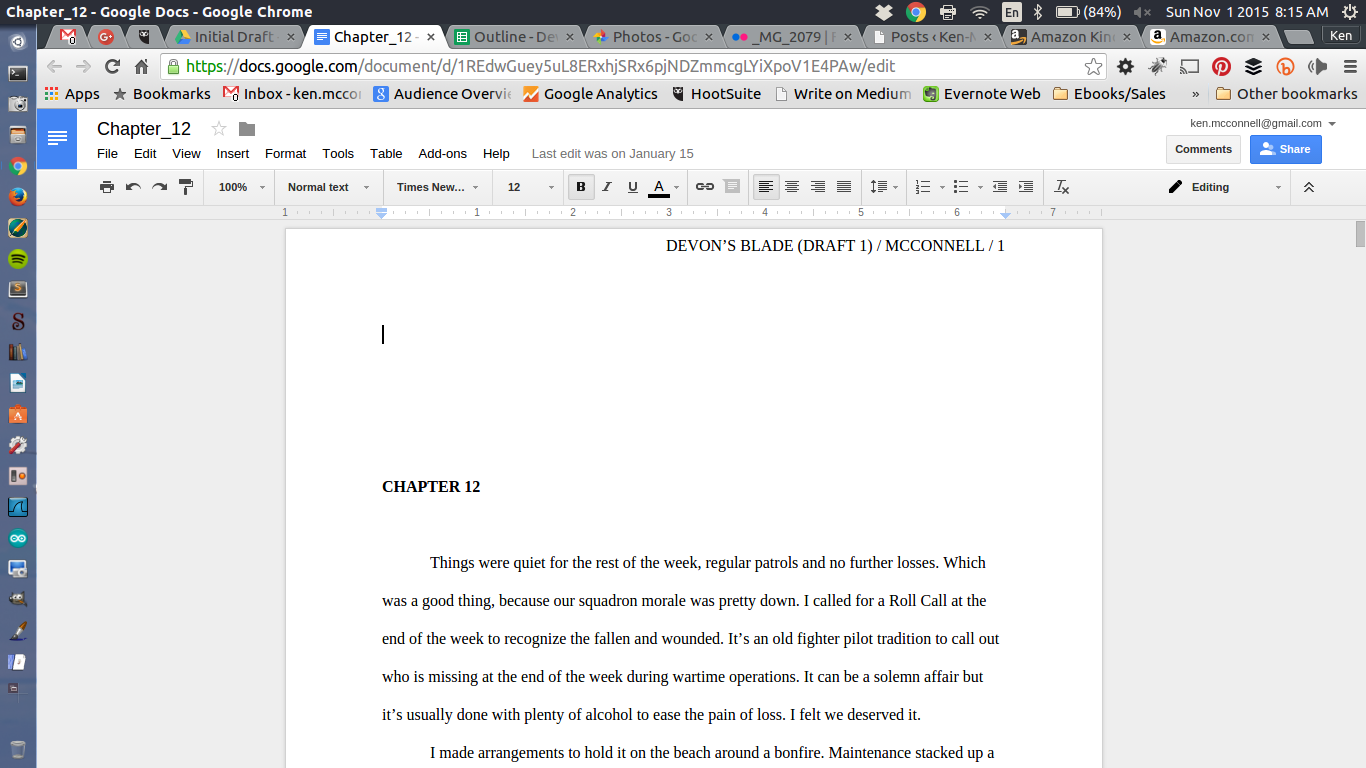 I actually let a few folks read along as I wrote each chapter, but I don’t think anyone actually took advantage of that. But it is one advantage of writing on the cloud – letting people shoulder surf while you write.

As I completed a new chapter, I added it to this merging script which created a single document. This was critical for me being able to write in Google Docs. Because I was not going to merge 17 chapter by myself. Forget that! Going to the merge. (Pilot speak for entering a dogfight. See? I’m all into this story. LOL) 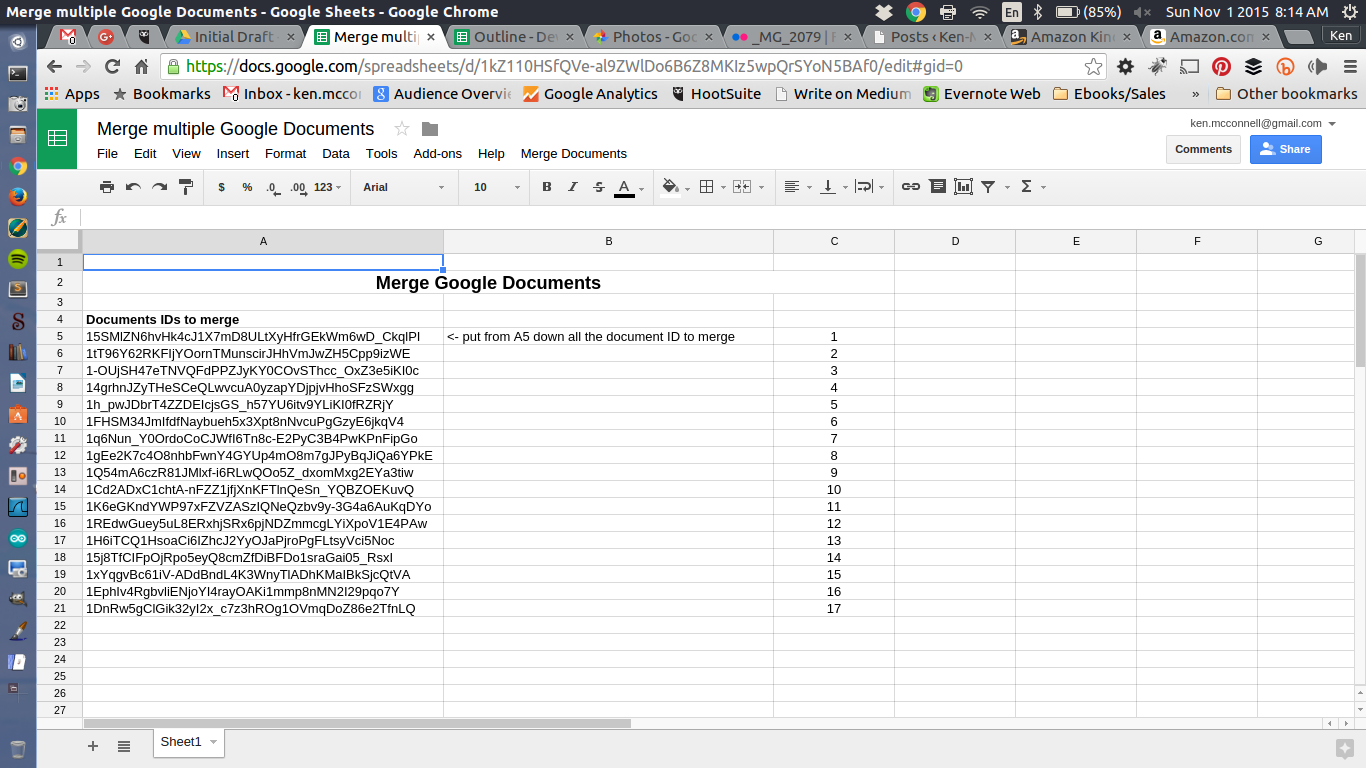 Here’s an example of comments in Google Docs. My editor always reads my first draft and leaves me little messages like this one about the song at the beginning. 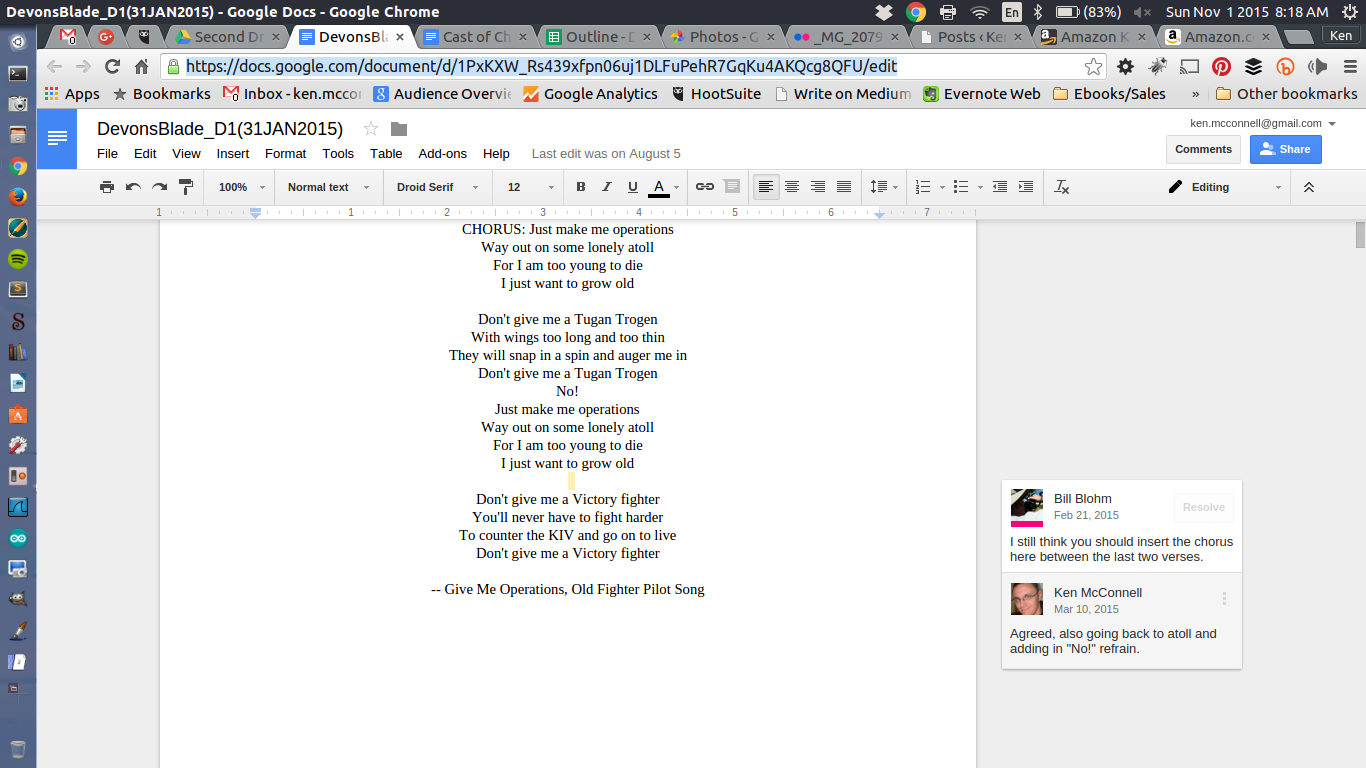 That song, by the way, is an actual song. Give it a listen: https://www.youtube.com/watch?v=DFdxwZR3T1A As sung by Oscar Brand, the original song was about WWII fighters. So if you know what they are, each verse describes them perfectly. Oscar was a national treasure. Great tunes.

Anyway, back to novel writing. Once imported into LibreOffice, I proceeded with Second Draft edits from my editor. Here’s where it gets real. 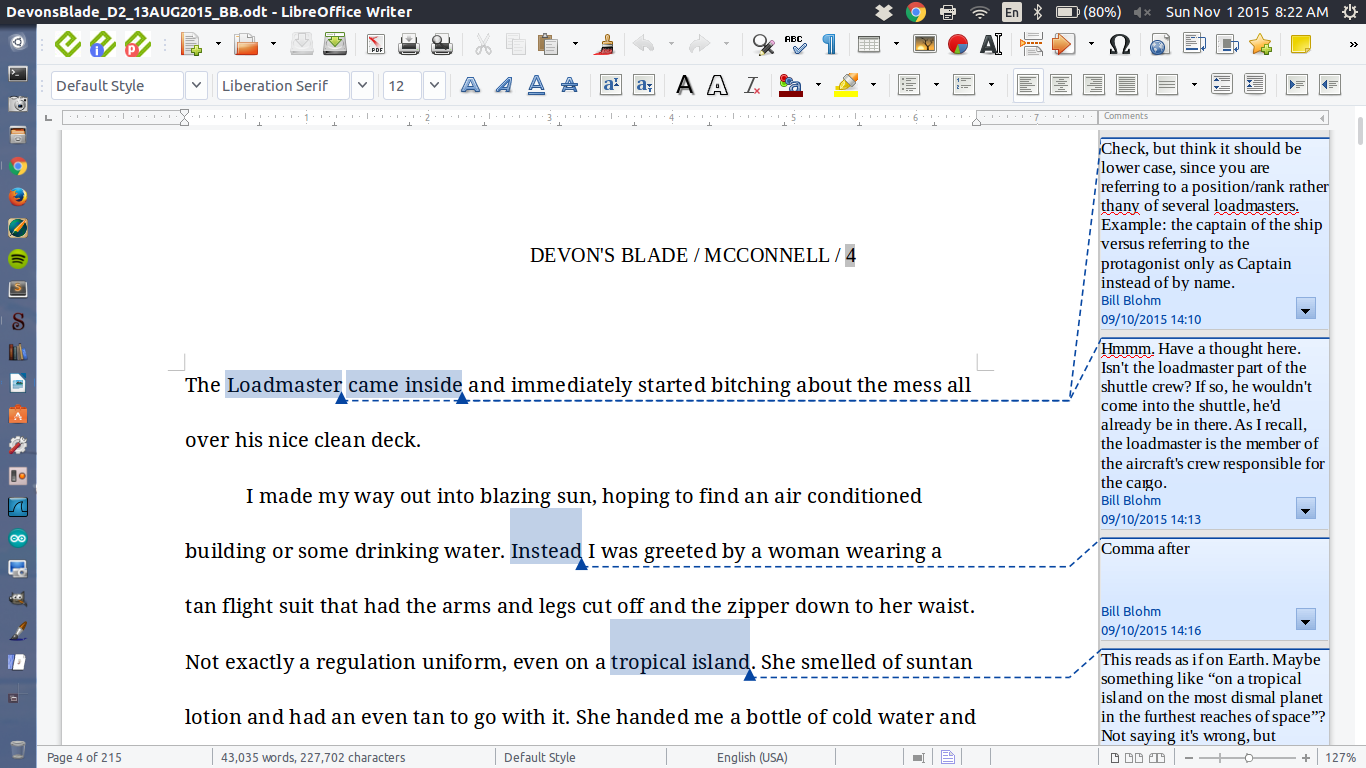 Second draft edits are all about getting the grammar and the details correct. Bill is excellent at ensuring I do both.

After the edits are made and a second read through for clarity, I export into epub from the plugin (Writer2Epub) for LibreOffice. Then I can open I can open it in Sigil and start building my actual ebook. I’m a programmer nerd so I love tweaking things myself and making sure things work under the covers. 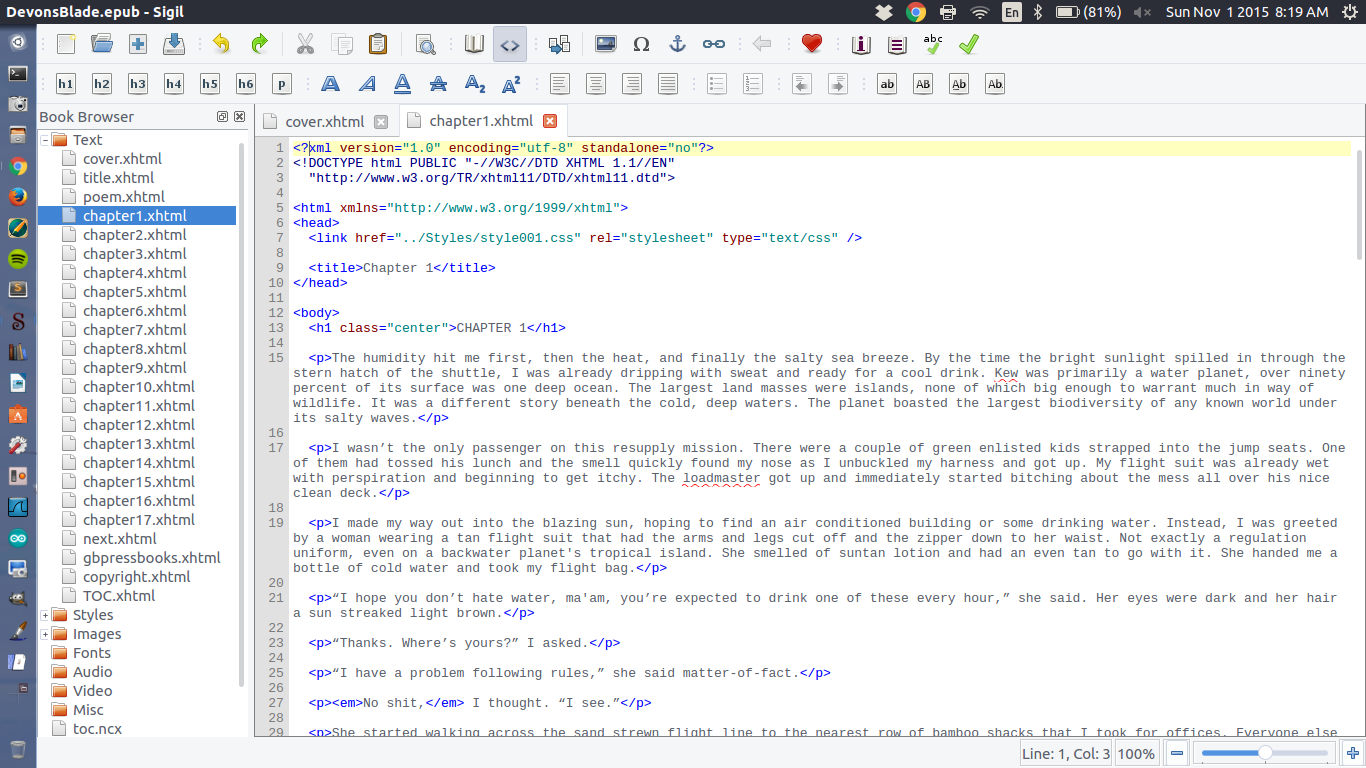 The final steps were to make a .mobi file of the epub so that I could send it to my Kindle. I use Calibre for that. My only beef with Calibre’s conversion is that it leaves spaces after some quotes. But that can be ignored while I copy proof it on my actual Kindle. I use the Notes feature to leave corrections. 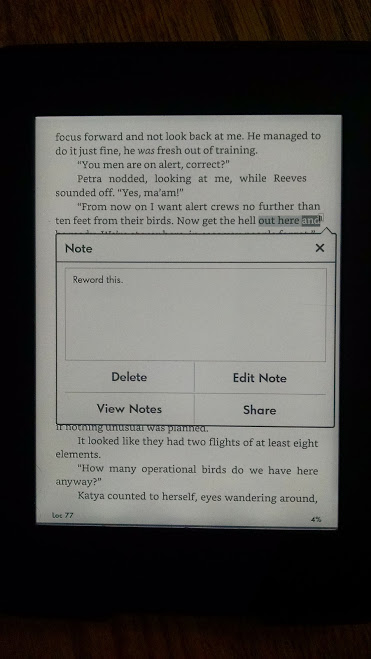 I believe it’s important to read your finished work on the device you intend it to be seen. That’s why my final proofing is always done on the Kindle, for ebooks and on a printed book for paper.

That about does it for this long post on the making of my latest novella, Devon’s Blade. If you haven’t read the story yet you can always get it on your Kindle now. As for other ebook platforms, you’ll have to wait a few months. I plan on leaving the novella’s exclusive to Kindle for the time being.

But you can always read all the other Star Saga books on Nook, Kobo and this blog.