I know everyone loves to loath Episode One of the Star Wars series, but here are some of the things I actually liked about the film. I’m not trying to convince you to to change you mind about it, I’m just bringing to light the things that shined for me. Something to think about next time you’re dissing it. 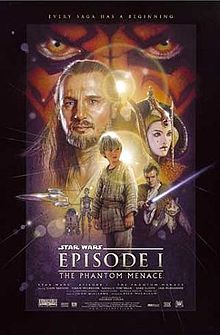 First off, E1 is not my favorite SW movie. Not by a long shot. I’ll never be able to defend it in a court of public opinion, nor would I even try. But there are some pretty cool things in that movie.

1. I actually like the politics. When I first saw E1 I was afraid it would be too much like what I was trying to do with my own Star Trilogy of novels. The first book in that trilogy – Starforgers, has a senator as a principle character and some of it takes place in the political arena. I was relieved that Lucas’s senate and mine were completely different. But I still enjoyed that aspect of E1.

2. The idea of setting the first three films 20 years ahead of the original trilogy was a good one. It allowed him to visualize the Star Wars galaxy differently, less militant, more hand crafted. I totally got that and enjoyed the production value achieved. It was also something I was trying to do with my own book trilogy, so once again, I related.

4. Darth Maul. He was cool and didn’t die in a lame maneuver like Boba Fett. I also liked  that he actually killed a good guy. This scene also mirrors Kenobi’s death in E4.

5. Ewan McGregor’s Obiwan was phenomenal. A spot on performance that hinted at Alec Guinness just perfectly.

6. John Williams’ music was understated but memorable. Duel of the Fates.

7. The anticipation. Most of us of a certain age, past 40, had to wait a long time to get our new fix of Star Wars. It was hard to not get goose bumps when the main titles rolled again. Few of us tend to remember how exciting that was. I remember.

8. It was the last non-digital Star Wars movie made. If memory serves. E2 was the first film shot entirely in digital, with no film. As a former filmmaker, this was important to me.

So you see, there are some redeeming qualities to this movie. We all know and love to hate the bad things about it, so no use rehashing them. I recently watched it on DVD and was amused by how much I liked it better than when it came out. Sometimes that happens for me with films I have not watched in a while.

I’ll leave you with one good reason to see this film next month in the theater. Star Wars on the big screen is ALWAYS better than Star Wars on your huge TV. Even if the film is not my favorite, I will see each of them again in the theater. These movies were intended to be seen in the theater, with an audience. It’s a much different experience than you can have with your home theater. Trust me.

Next time I’ll re-watch Episode 2 and look long and hard to find a few things I liked about it.