The Boise State Broncos take on the Washington Huskies this evening at Alberston’s Stadium, Boise. This is the first time former Bronco coaching legend Coach Petersen will be on the visitor’s side of the field in the stadium he helped to build. We’ll be respectful of the legend, but all of Bronco Nation will be rooting for his demise tonight.  GO BRONCOS! 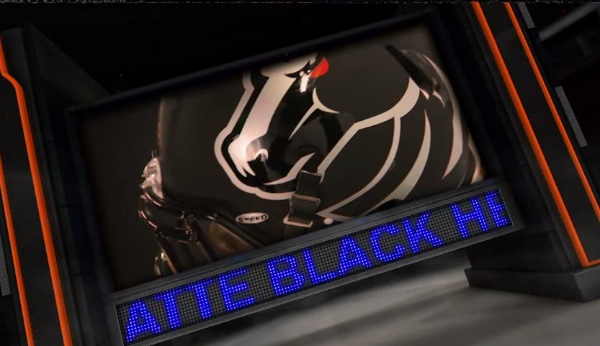 Next Saturday’s BSU Homecoming game is going to be a black out. Uniforms will change from blue to black and all the fans are being asked to wear black. This is a first for Boise State.

The helmets have the new horse head logo and player’s number and are matte black. The jersey’s have blue and orange trim and the numbers are the new age blue and white fade. The shoes are silver and black.

I’ve always been a fan of new and different college uniforms. I think it brings excitement and color to the college football game. I’ve really liked the new horse head unis that BSU has now made their standard model, from the all white away uniforms to the all blue home and all the combinations in between like the gray shirts on the blue this past weekend.

This special Nike made black uniform probably won’t be used much if ever again, but as long as Nike is willing to make cool looking one-off uniforms, I’ll be there to enjoy them as a fan of college football in general and BSU in particular.

You can see the uniforms in full at KTVB‘s website. 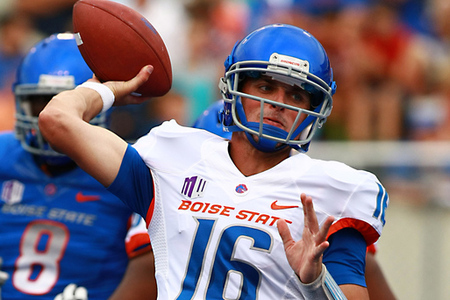 It’s football season already and Friday night I’ll be over at a friend’s house watching our beloved Boise State Broncos play their first game of the season. All the big games we tend to watch in packs for support. We’ve seen many, many close games and this season starts with another big match up.

I don’t know if BSU will win all their games this year but the odds are against it. The good news is that they could lose this first game and still win the conference for the first and last time. Nobody expects the Broncos to get into a BCS Bowl this year, and next year they will be in the Big East and so will be a BCS team.

I’m just looking for a close game in which our young team is tested by a really good Big Ten team. GO BRONCOS! 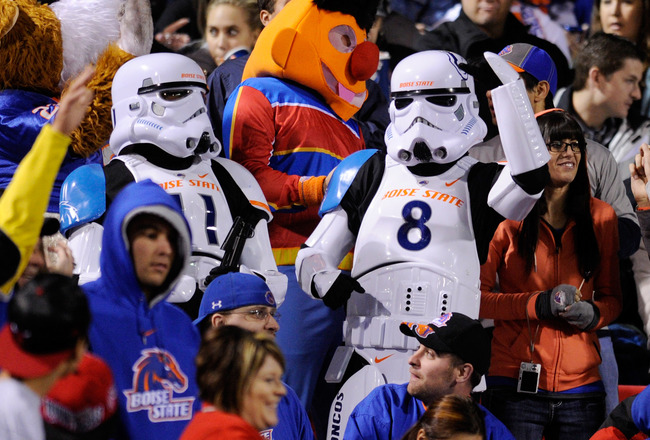 I’ve recently taken to watching movies on line through Amazon’s streaming video. I can watch them just fine on my Dell XPS with Ubuntu. However, I wanted to try and push them to my HDTV and watch them on a large screen.

When I tried it, the video was fine, but no audio. Then I found this blog post. Your mileage may vary, but for me, I just told the audio settings to use the HDMI output and it worked fine. Now I can watch movies on my big screen TV.

I did need to purchase an HDMI rat tail adapter and some HDMI cable, to make this possible. That was not inexpensive. I was able to get these items at my local Best Buy.

Another thing I did related to this, was purchase the NFL pre-season pass for $20.00 so I can watch all the pre-season games on demand. Normally I’m not that big of an NFL fan, but so many of my favorite BSU football players are on different teams this year, I wanted to see how they did in professional football. This too works fine on the Dell.

Our Cub Scout Pack was selected to participate in the Famous Idaho Potato Bowl Opening Ceremony this year. My sons and I both jumped at the chance to be in the formation of Scouts seen at the singing of the National Anthem. It was a fun opportunity to walk on the Blue Turf of BSU’s home stadium and get to see the game for free.

We practiced last Sunday afternoon along with all the other volunteers who participated in the on-field festivities. It was cold, but the kids had fun and were looking forward to actually doing it for a live crowd. When game day arrived, the kids got to shine in front of 28,000+ football fans. There we were in the first and second rows representing the Cub Scouts of Idaho and all dressed up in our uniforms. Such an honor.

When the flight of  two Air Guard A-10’s buzzed the stadium, they flew right over our heads. Way cool for any kid in the stadium and most of the adults too! After the anthem we walked single file over to the south end zone to form a tunnel for the players to run through. The kids were really impressed with how big the players all were. Some of the Cub Scouts played Optimist football and they couldn’t believe that they would ever be that huge one day.

We filed off the field and took our seats in the south end zone and were treated to a great game that eventually led to a come from behind victory for the Ohio Bobcats. During the halftime break, our scouts got to high five the Bobcats as they filed off the field and headed to their locker room. It was very nice of the players to do that for the local kids. They will remember things like that for the rest of their lives.

My kids and I had to leave in the third quarter of the game due to the cold. We went out to diner and kept checking the for the final score of the game on my cell phone. When the kids found out that the Bobcats had won, my oldest proclaimed, “I’m never washing my gloves again! We high five’d all those Ohio players!”

An “Old School” Boise State University balloon, complete with blue field and Bronco. Taken this morning from my Droid phone out the sunroof of my Honda. The zoom camera on the original Droid, pretty much sucks. Best viewed no larger than it is in this blog post. I did manage to catch the morning Magic Hour light on the balloon – witch is always Bronco Orange. ;-) 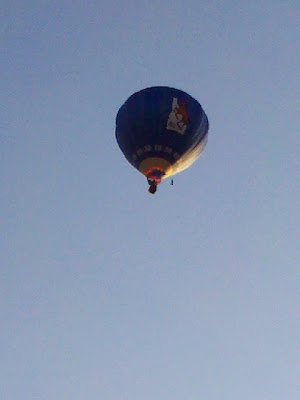 Yesterday we learned what BSU’s new Nike Combat Uniforms will look like for the season opener against Georgia. All white with a touch of orange and the wrong color of blue. Overall, they don’t look bad and they will contrast nicely with the all-red Bulldogs uniforms. Really can’t wait for this season to start. Going to be fun. I’m calling for the BSU band to play the Imperial March when BSU comes onto the field for that game. How best to honor the Stormtroopers from Boise? (I’m well aware of the Empire-like dominance of the program when it comes to winning seasons.)

BSU is suing some High School for calling their new blue field, Blue Turf. Really? BSU should be happy to welcome any color of field to their ranks. Considering the amount of crap we have taken for the Smurf Turf, we should be happy to have copycats and wanna-be’s out there. The more the better for the cause. I think when the current player fashion show ends, we might see an era of colored fields at more colleges and High Schools. It’s good for football. Bye-the-way, the HS field is gorgeous.

My son’s first football game is tomorrow morning. The team looked real sharp in practice last night. We’re hoping to go better than just the two wins of last season. Today, he’s wearing his team jersey to school at the coach’s suggestion. Yeah, he’s in fifth grade, says the geek father whose son is a jock.

You know it’s football season around these parts when the local grocery store – Albertsons, goes all out with a huge display with the local college football team’s logo. Impressive. GO BRONCOS! 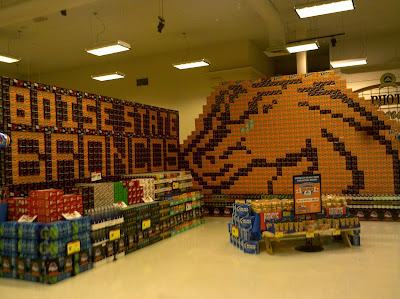 We finally got to a BSU game this year and we picked a great one. Lots of school records were broken or made and the weather was a fantastic 70 degrees. The Broncos really put on a great show and trounced the Hawaii Warriors 42-7. Here are some pictures I took with the Droid. Looking North towards the Boise River and the foothills. It was overcast at the start of the game and then the sun came out.

Video of the team coming on the field. BSU vs Hawaii

My oldest got to register for football today at the BSU practice facility on campus. Then he and his brother got to go run through some football drills with BSU players. After about an hour of fun the kids got a speech from Coach Chris Petersen.  He told them to study hard in school and to clean their rooms! 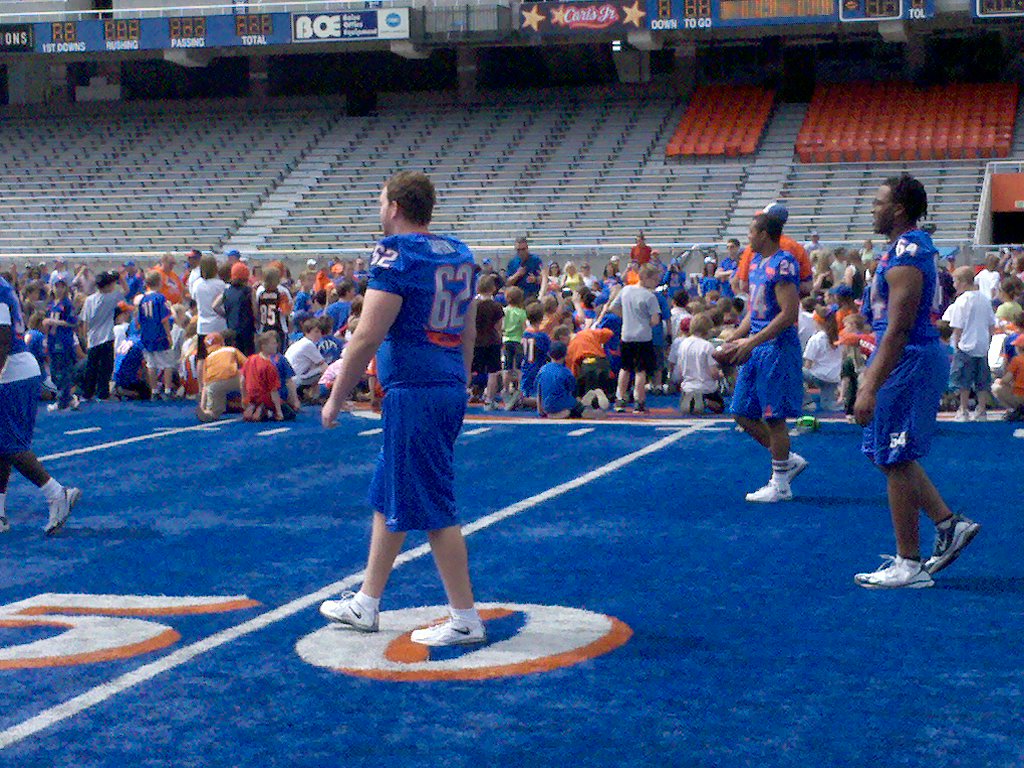 In the morning baseball games, my oldest’s team won their first game, and my youngest got on base four times in his Rookie game. A great day for baseball in Boise.  Seventy degrees and sunny!