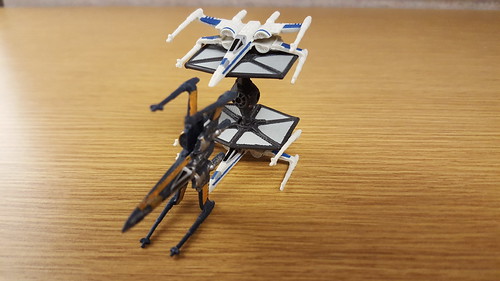 I’m currently writing the third act of my novella, K’nat Trap. While thinking about my story on the way home from work I realized that I had failed to account for some things during my last lunchtime writing session. For one, I had my hero return from a planet and didn’t any make mention that he’s basically lived in a bog without grooming for three days. Yeah, he’d stink and he’d have a few day’s growth of beard. I need to go back and add in those little details.

The second thing I noticed was that the good guys seemed to be getting off too easy in the big second act conflict. Turns out I had them handle lots of starfighters, but not the destroyer warships that launched them. So they are not out of the woods just yet. I think the second act needs to be drawn out a bit more. I’m going to lay the hurt on for a few more chapters to increase tension. I also have a nice little reversal going when the main plan falls short.

This is what happens when you go off-outline and have to blaze a new path through the plot. This is good news for this story though, it’s coming up a bit short on word count right now. Nothing a new battle won’t fix.

I’ve written a bit over 2,000 words in Plume Creator this past week. So I thought I’d give some impressions as a writer using a writing program. I used the Outliner to sketch out the scenes in my first chapter. Being careful to write a synopsis for each scene and to use the notes section to remind myself of important features for each scene.

Before writing the scenes in the chapter, I also took the time to set up and add the locations, characters and objects used in each scene using the Attendance Tool. It seems like extra credit work when you are writing to do all this preparation, but believe me, it can save your butt and lead to quicker, more coherent scenes in your first draft.

I especially liked having the character’s names in the scene I was writing right there beside the text editor. I have a horribly short memory for new names of my characters and this prevents me from looking up the names and wasting time putting markers for names that I can’t recall as I’m writing.

Overall I’m very pleased with the program and I recommend you try it out if you are on Windows or Linux. If your using Plume Creator to write your novel, tell us about it in the comments. I happen to know the the program’s very talented creator Cyril, reads this blog. My novel in progress – Starveyors, had just passed 50K words which in layman’s terms means writing the book has come around the final turn and is heading down the stretch to the finish line. Important scenes and chapters are being written that will include the second turning point and the big finale.

Characters are being tested and if they pass, will become better people or they will die, whichever is appropriate. Tensions and suspense are high and not coincidentally so is the danger. Things are exploding, literally and figuratively speaking.

This is a critical time for a writer. It’s not easy keeping all the subplots spinning as the entire story comes to a conclusion. I never get it right the first crack, which is what the second draft is for. After my Alpha reader tells me how messed up the story is, I go back in and clean things up and add all the parts that I skimmed over or left out in the first draft. The second draft is where the story fleshes out for me. Where the main characters come alive and their struggles become something the reader will care about. But for right now, all that maters is that I finish.

So if I’m less active on the blog in the next few weeks, it’s not because I don’t like you. It is because I’m all about finishing the damn novel. I’m not just finishing a novel with this book, I’m finishing a trilogy, so things are just a tad more complicated and I need to concentrate so I don’t miss anything. I know you’ll understand.

P.S. You can follow my word count progress in the side bar. I don’t clog the internet with daily word count brags.

Having just completed the first rough draft of an outline for Starforgers, the prequel to Starstrikers, I thought I’d share how I outline a new novel. This is by no means the only way to outline a novel. A quick internet search will net you all kinds of great articles on how different folks do essentially the same thing.

The first thing I do is think about the story I want to tell. Who are the main characters, what problem are they trying to solve and where is the novel set? These are best mulled over in my head and occasionally in notes that I scribble to myself. The process for discovering exactly what the novel will be about may take months or even years. In the case for Starforgers, it has taken me literally decades to work out the story.

Starforgers has been part of a three book trilogy  that I originally came up with in the early 1980’s while still in high school. I even have several chapters written and a rough outline written several years ago. But over time, the story has changed in my head and new concepts and characters have been dreamed up. So it was necessary to work out the overall plot again before setting down to outline.

The next thing I do is find out who my main characters are, figure out their Goals, Motivations and Conflict lock. Who is the hero, who is the villain, what sub-plots will I be including, what secondary characters will be included and why? These are all things that I have to work out in advance, so that when I start laying down the foundation of the outline, I know why my main characters are doing what I’m having them do in the plot. For a SF novel there’s a whole other can of worms called World Building that I will not be covering in this post.

The tool that I use for outlining is not unique to any one computer platform. It’s the lonely spreadsheet. It usually starts out in Open Office and then gets ported to Google Docs so I can access it anywhere and from any internet enabled device. The reason I use a spreadsheet is because I find it easy to manipulate blocks of text in chronological order in a spreadsheet. The first pass through the novel, I skip a line and then add a brief description of a scene. Eventually these bullet lines become chapters or at least scenes. Sometimes I will note the day or time the events are to happen. Usually I will have a column for noting the steps of the Hero’s Journey. This helps me see the overall structure of the novel.

After I have all the major scenes written down in chronological order, I then go back and break out each scene with the major points of action that need to happen. Again, adding lines to the spreadsheet. You have to set aside some time to do this properly and it’s important not to go too crazy and completely write your novel in the spreadsheet. But the more bullet lines you can add to a scene, the easier the scene will be to compose when you actually start writing your novel. I find that I usually don’t get writer’s block if my story is mapped out in enough detail.

While I’m writing, I will discover new connections and possibly change the order of scenes and that’s perfectly okay. But I find that my mind won’t see those invisible connections unless I think about them in before hand. The time spent constructing a detailed outline is recouped during the writing phase by letting me focus on the words while following the plot that I have already worked out. It’s like building a model from instructions. If you didn’t follow the step by step instructions, you might leave out that critical piece that holds together the wings so that they fold like they are supposed to in the real carrier based airplane that you are modeling. (No, I never did that, I  always followed the directions, I swear!)

When I’m deep in the first draft, I often find that I spend a few days during the week thinking about the upcoming chapters and then adding things to the outline. So when I sit down to write, the words just keep flowing until I finish the chapter. Stalling out while writing your first draft can be fatal. I had a major stall out while writing Trymia and it took months to get my head back into that novel. Not recommended. I eventually had to re-read what I had written before the stall out, and then blindly follow my outline until I was back in control again.

I have heard outlining described as a blueprint for your novel to follow.  The trouble with that analogy is that blueprints are not supposed to change as you build a structure. That’s not to say they don’t, but generally speaking they should not change. Novels are more organic and writing in general less structured. I have found that if I can make the process more structured, it tends to go faster and then I can maintain my output and that, brings more books to my readers in a more timely fashion.