Thought I’d show you the numbers for the week after Corvette’s release. I do this not to brag or to belabor how little money I make on writing, but to help others understand what to expect. So far this book is turning out to be more interesting than any other release I’ve done. I’ve had an out of nowhere hit before and the sales numbers for that were in the hundreds per day. Most of my books start with maybe twenty or so sales and then putter out to about one a day for a while and then a couple per month. Corvette started reasonably well and has showed some staying power over the week.

Here are the numbers just before the weekend. 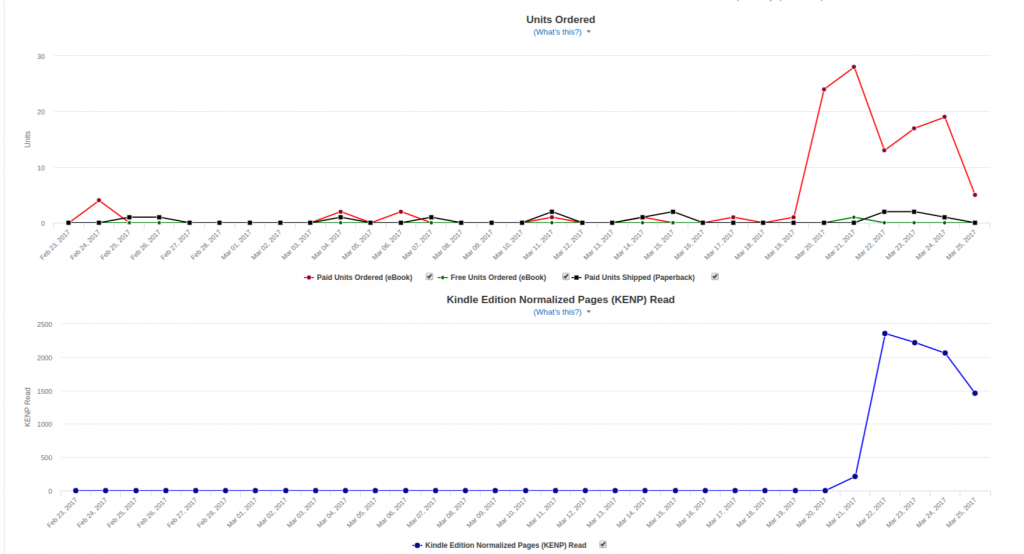 You can see the spike on release day, in this case I picked a Tuesday (21st March) which is when the Big 5 publishers typically release books. After that the sales take a hit but are still not too shabby. Then they finish the week above 10 books per day. This is where I started to realize this book was sticky. The fall off at the end is just when I took the snapshot early Saturday morning. The red line is all ebook sales and the black line on the same chart is all paperback sales. The blue line represents pages read by the KDP Select program which I enrolled this book into for the first 90 days to generate interest.

Here’s the breakdown of sales to date for March. Again, this was taken early Saturday morning. Corvette is doing very well with 60 ebook sales. Devon’s Blade is still selling well despite falling to the mid 500,000 ranking. Everything else is just curiosity. What’s interesting is that Books 1, 2, and 3 in my Star Saga series each have at least one sale. This means at least one person is taking a chance on reading the series. I hope that after reading Corvette, I start to see their numbers going up. The whole point of Corvette is to have it be a gateway book to the series.

This is a screenshot of the rankings on the book’s Amazon page taken early Saturday. The book has been as low as 10,000 and as high as 16,000 for the week. It’s never gone below 100 on any list but likes to hover just under 200 on a few of them. This puts the book out of sight for even the most bored list readers. So clearly you have to sell more than twenty books a day to get under a hundred on a list. Being in Select is helping get it some visibility for sure.

What about paperbacks, you ask? I’ve sold two Corvette paperbacks. Which is exactly why I’ve never done them before. But enough people who know me have said they would like to purchase them so I can sign them to make it worth going the KDP Paperback route on the whole series. So by the end of April I’ll probably have all of them in paperback. If nothing else it will be fun to have a vanity shelf.

Below you see the numbers come Sunday morning.

Late Saturday before turning in I took this screenshot of the rankings. I think that may have been the best day yet. 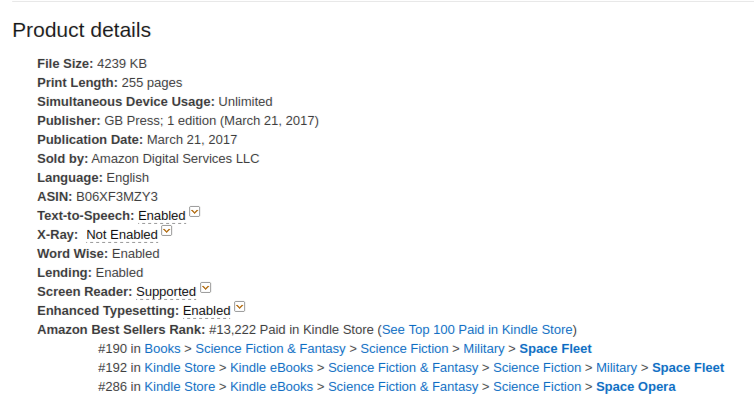 The sales numbers for Corvette and hence the Star Saga series are still pretty much small potatoes but they are better than normal and I’ll take them. I’m curious if anyone will feel the need to review the book as time goes on. I’ll do another post on the numbers some time next month to determine how well the book has done. I expect to launch another novella from the series later in summer. In the meantime, thanks for buying Corvette and I hope you carry on with the Star Saga.