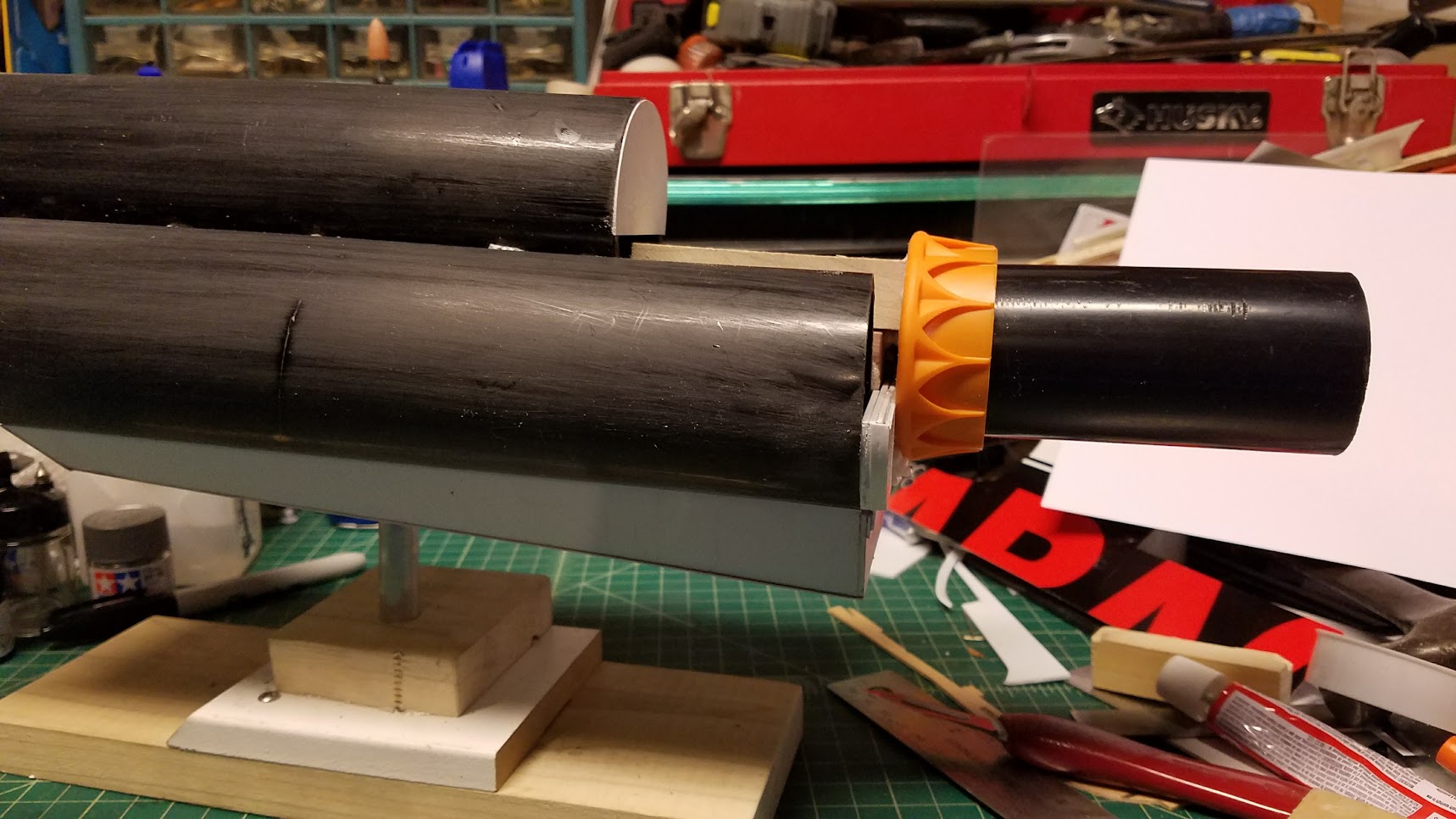 I needed to address the uneven PVC tubes and decided to just use fillers to even things out. I then proceeded to build the main super structure with sheet styrene. This model didn’t require a sturdy frame underneath as the boxing in of the super structure would not be too large to support the model. 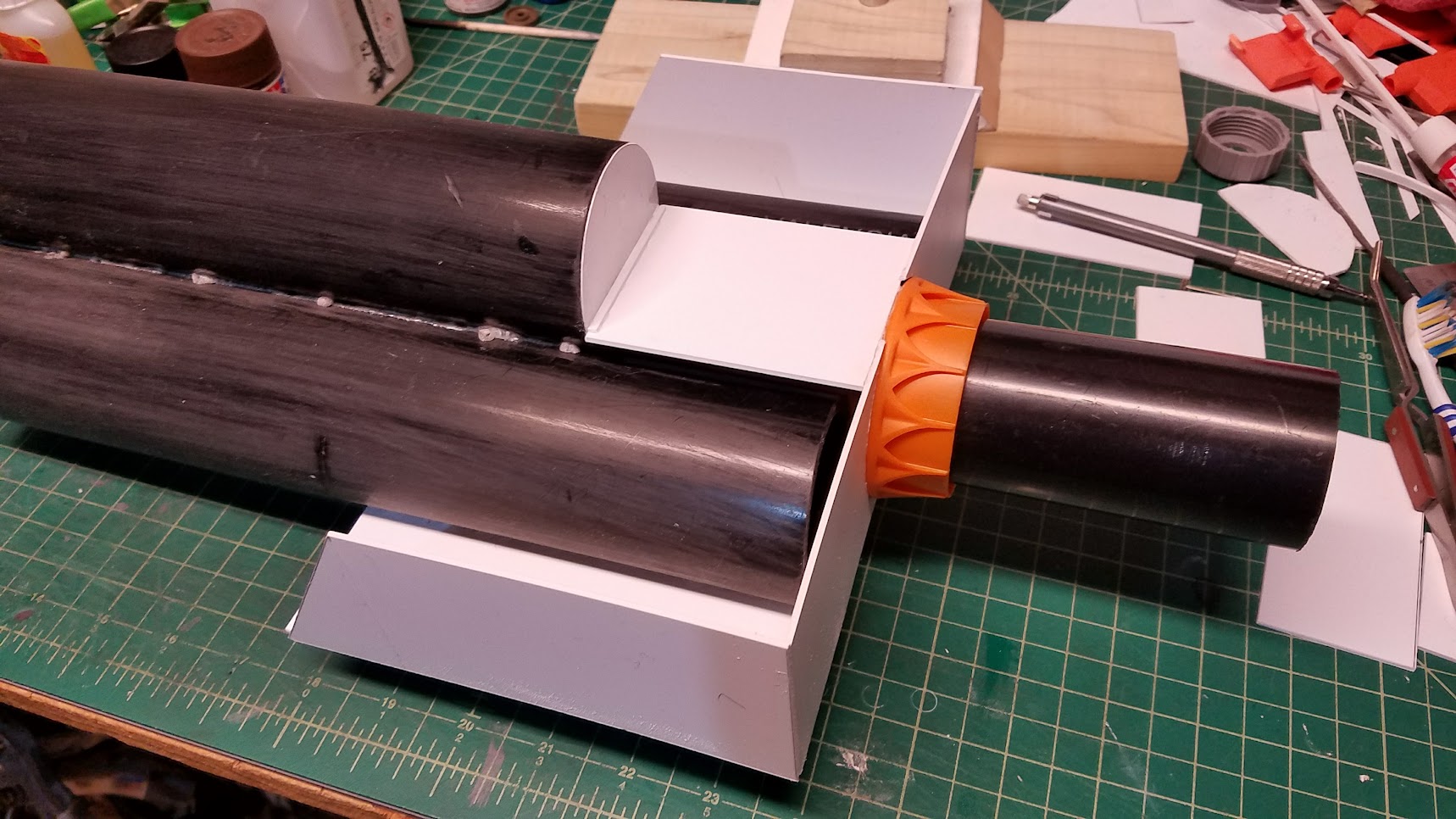 I had to cover the front edges of the bottom of the PVC pipes with styrene as you can see in the below image. 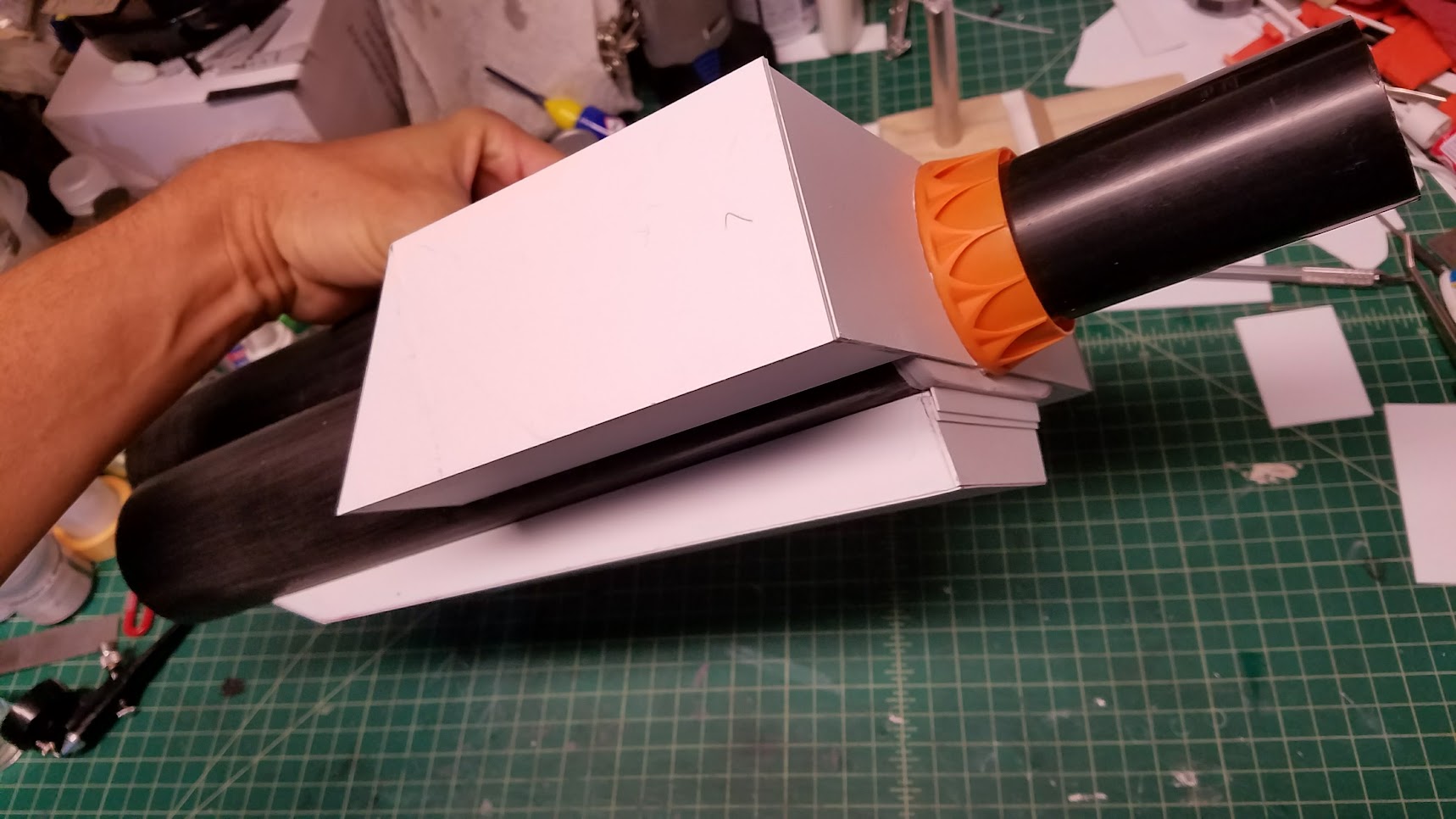 Before getting too far along with the boxing in I ran some wires down the engine tubes for lights. You can also see some framing for the top of the super structure. There will be a landing bay on one side of the ship and it will have a LED light. 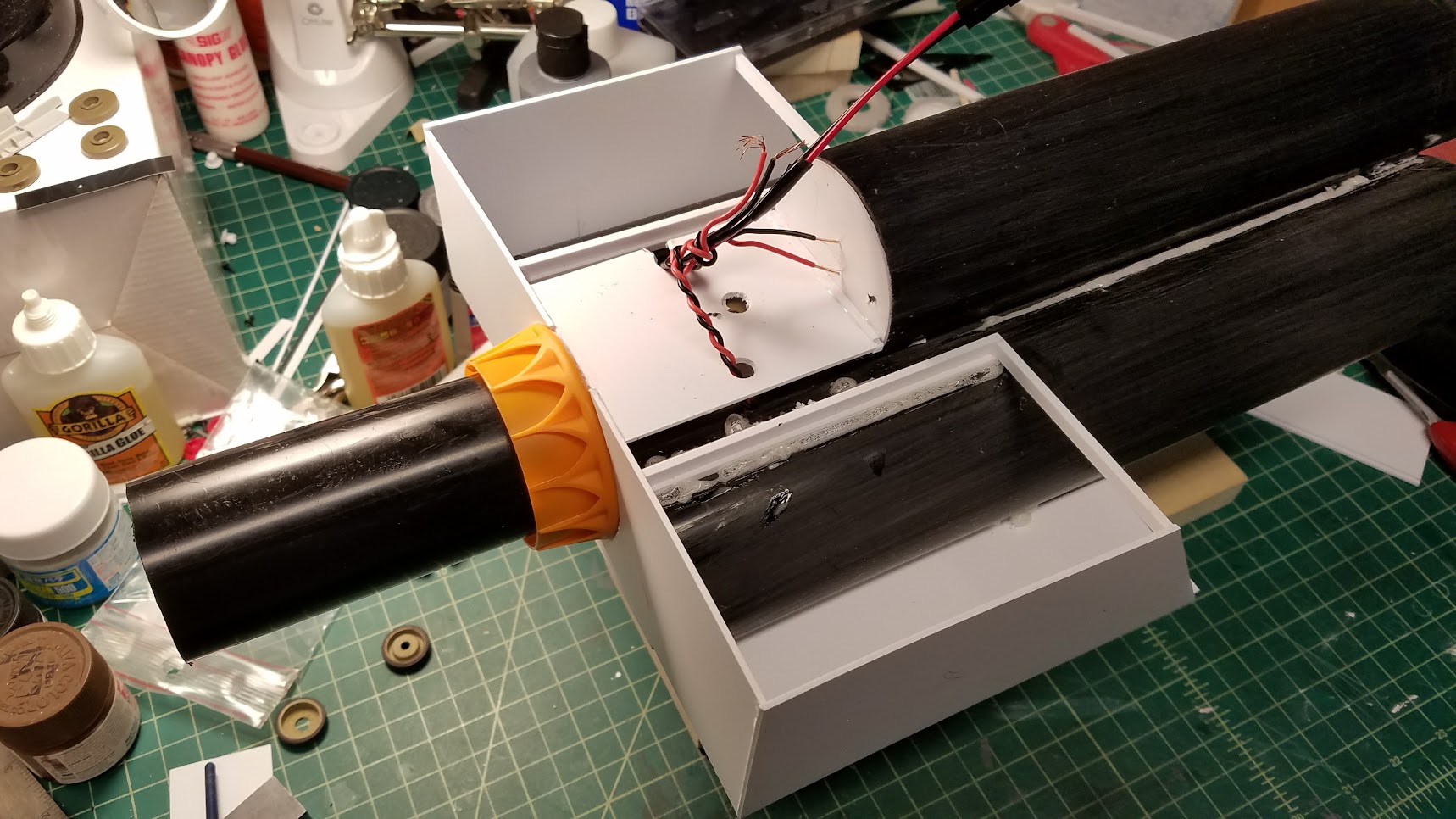 Next came construction of the engine details that will house the LED lights. I kept things simple here. Using a plastic greeblie found at work and the housing for an electric toothbrush. The rest were scrap styrene and a tank wheel to hold the LED. 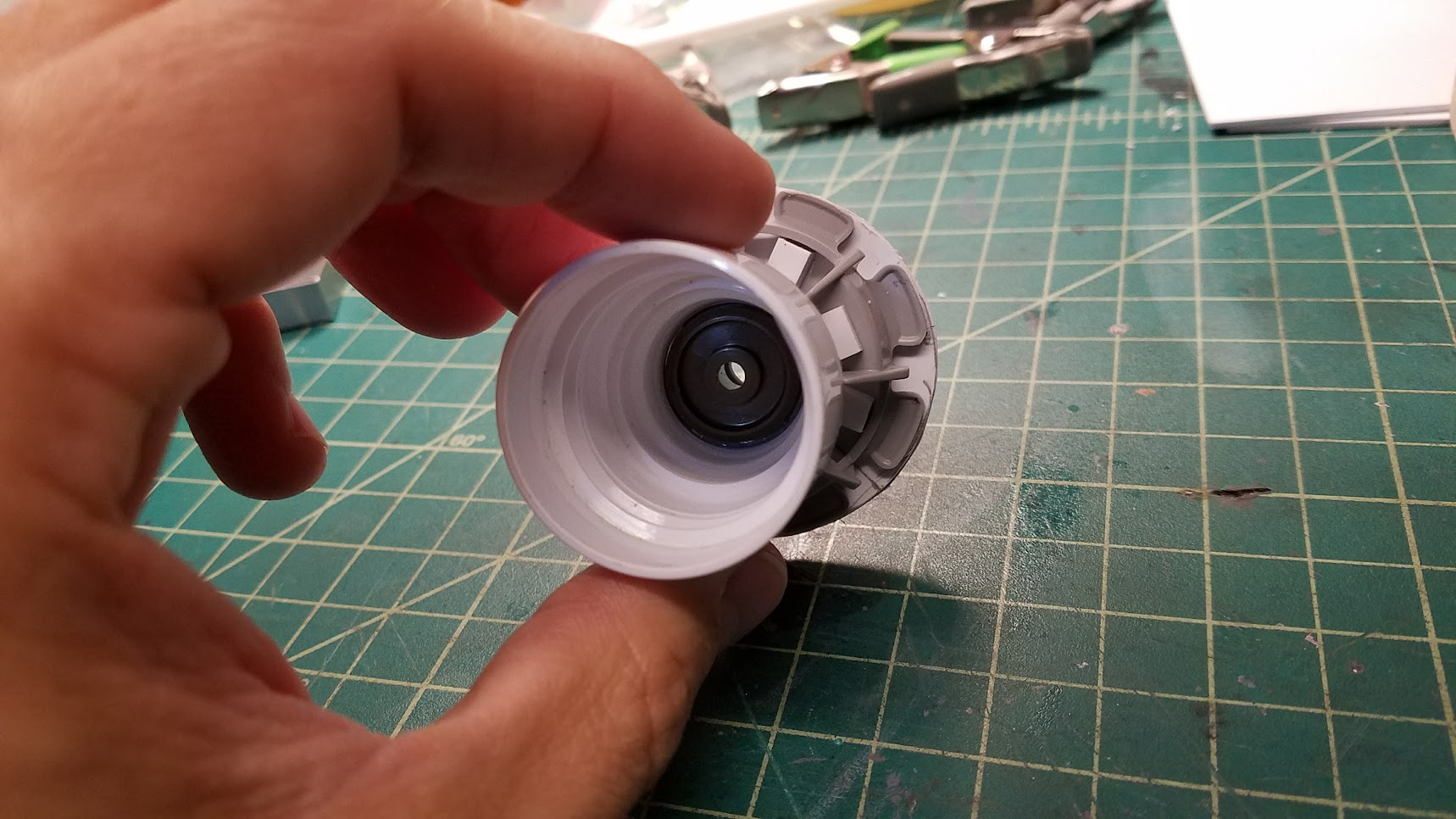 The top of the model was going to be built entirely out of sheet styrene just like the main super structure. But I found a really interesting printer ribbon cover at work and decided to go with that instead. You can also see the top deck over the super structure. 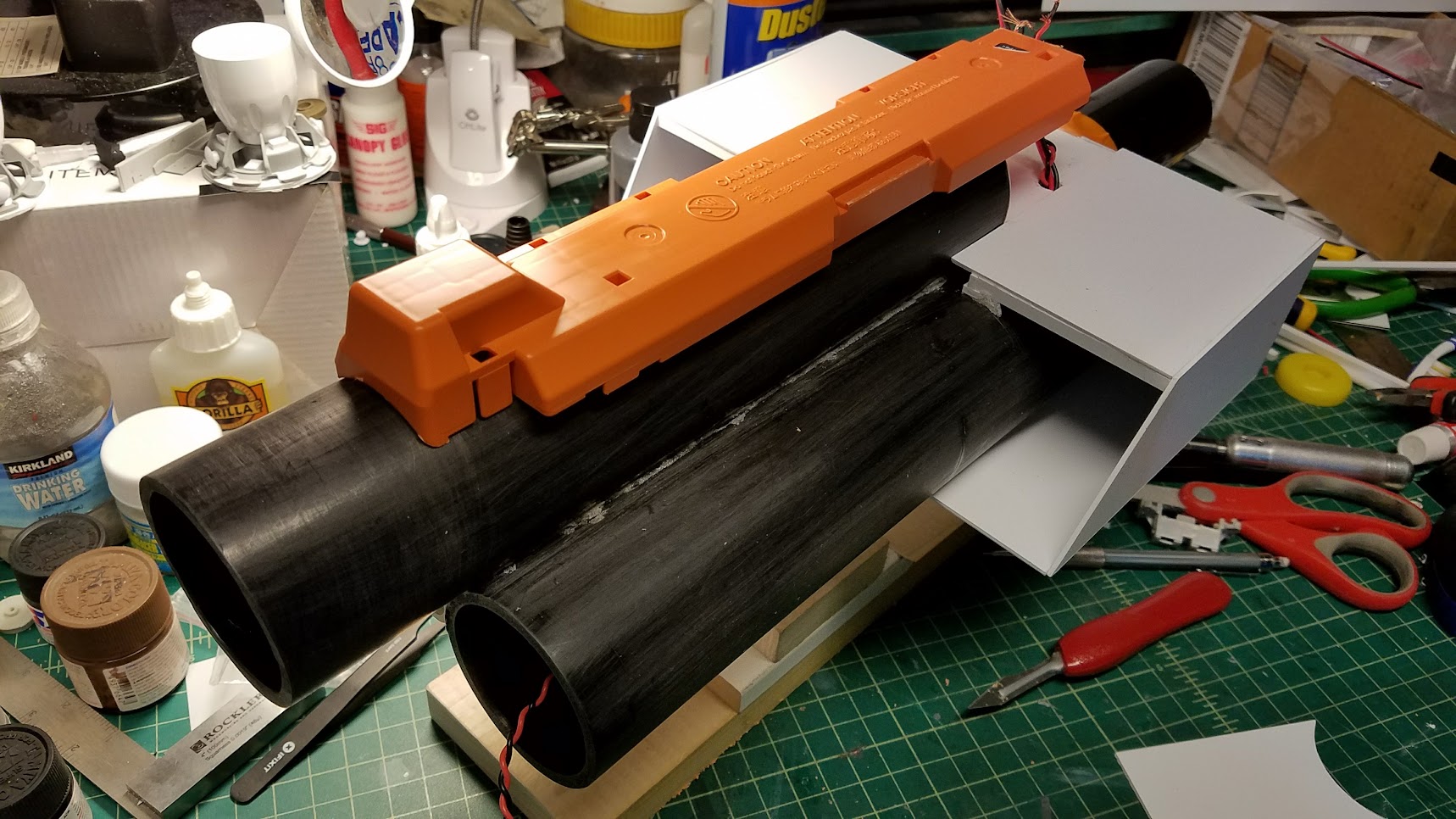 Next came the top deck creation, again using 0.60″ thick styrene sheets. I followed the original pencil sketch as closely as possible and built it up over the orange printer ink cartridge cover. 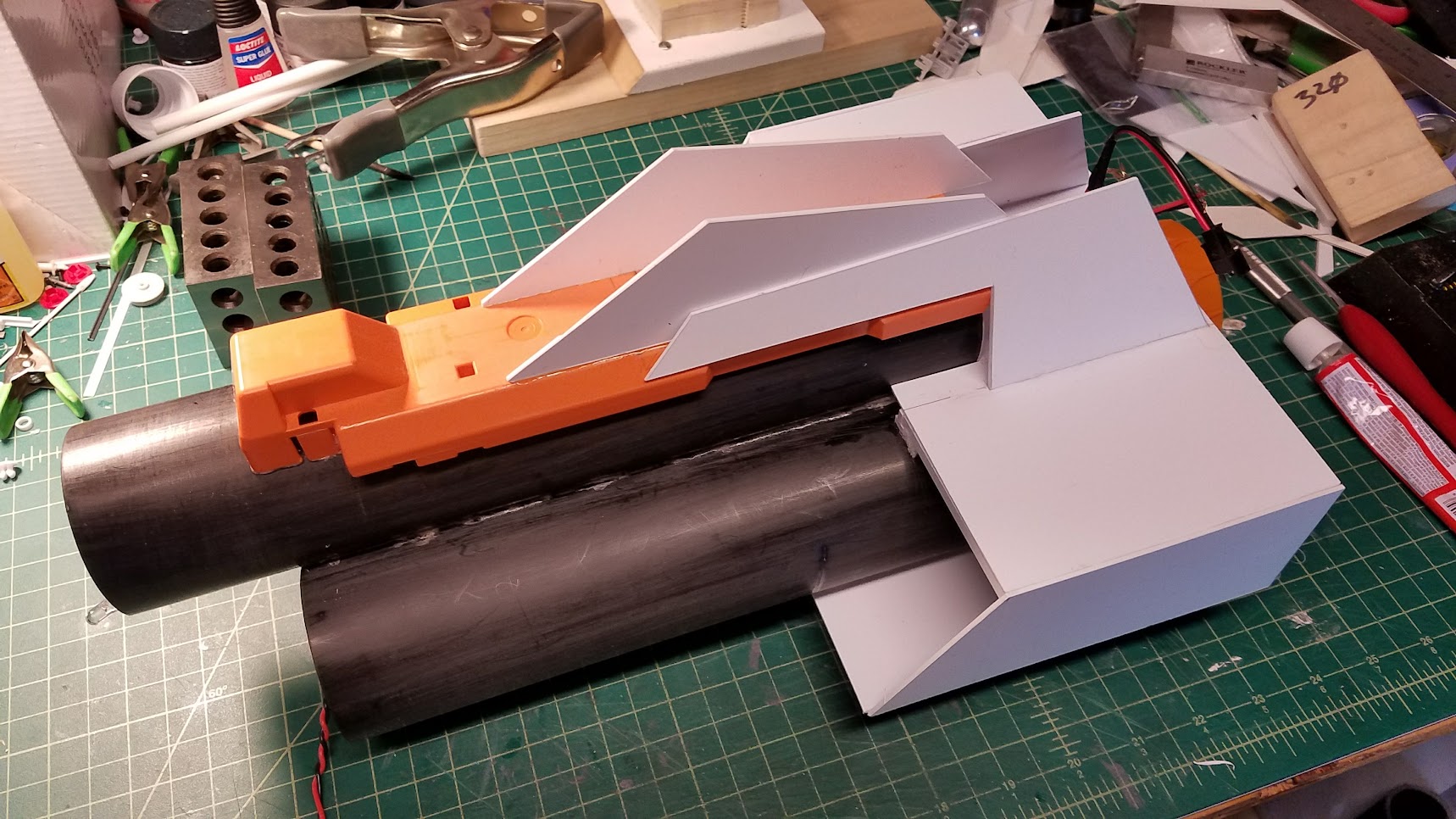 I next turned my attention to the head or bow of the starship. Again, I used sheet styrene to box in the basic shape. I built a shelf along the inside so that the top of the head could be removed to add fiber optics. I’m always trying new techniques with each model and this time I used a thinner piece of styrene over the top of a thicker piece to create the hidden attachment of the top piece. 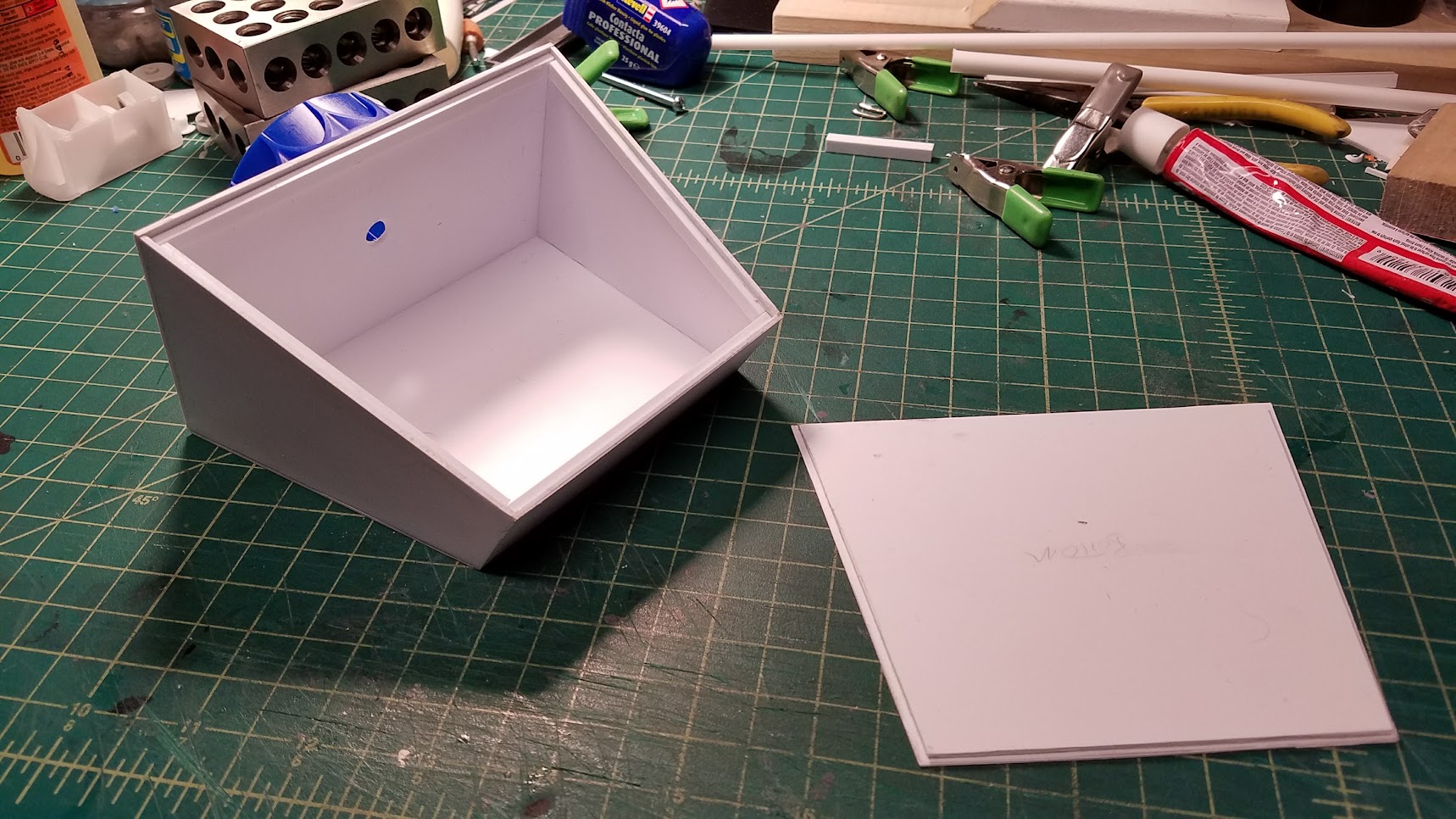 I found some other plastic bits from work that would make perfect gun boxes for the sides of the bow. So I added some model kit parts and thin sheets of plastic and then attached them to the head. 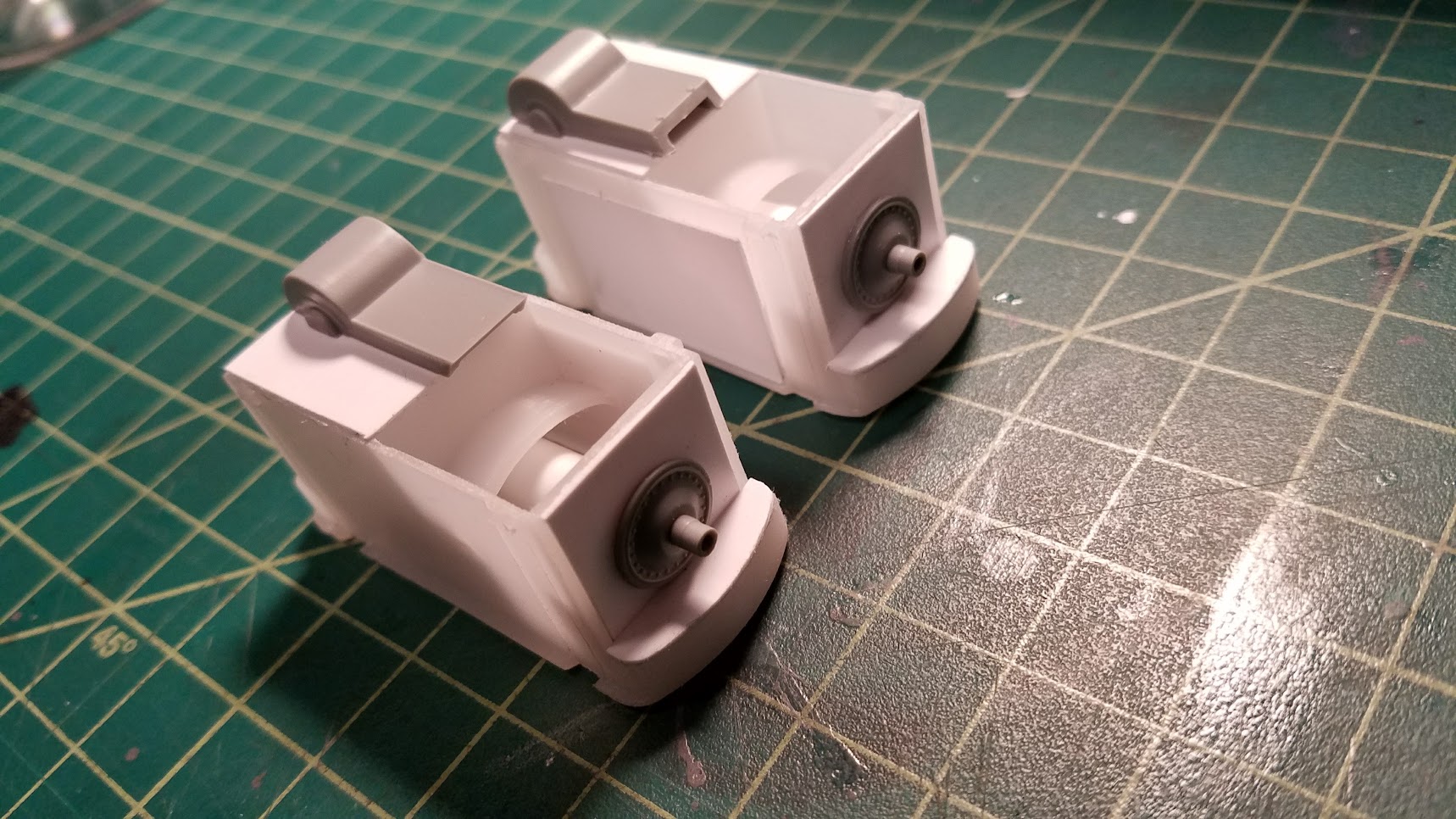 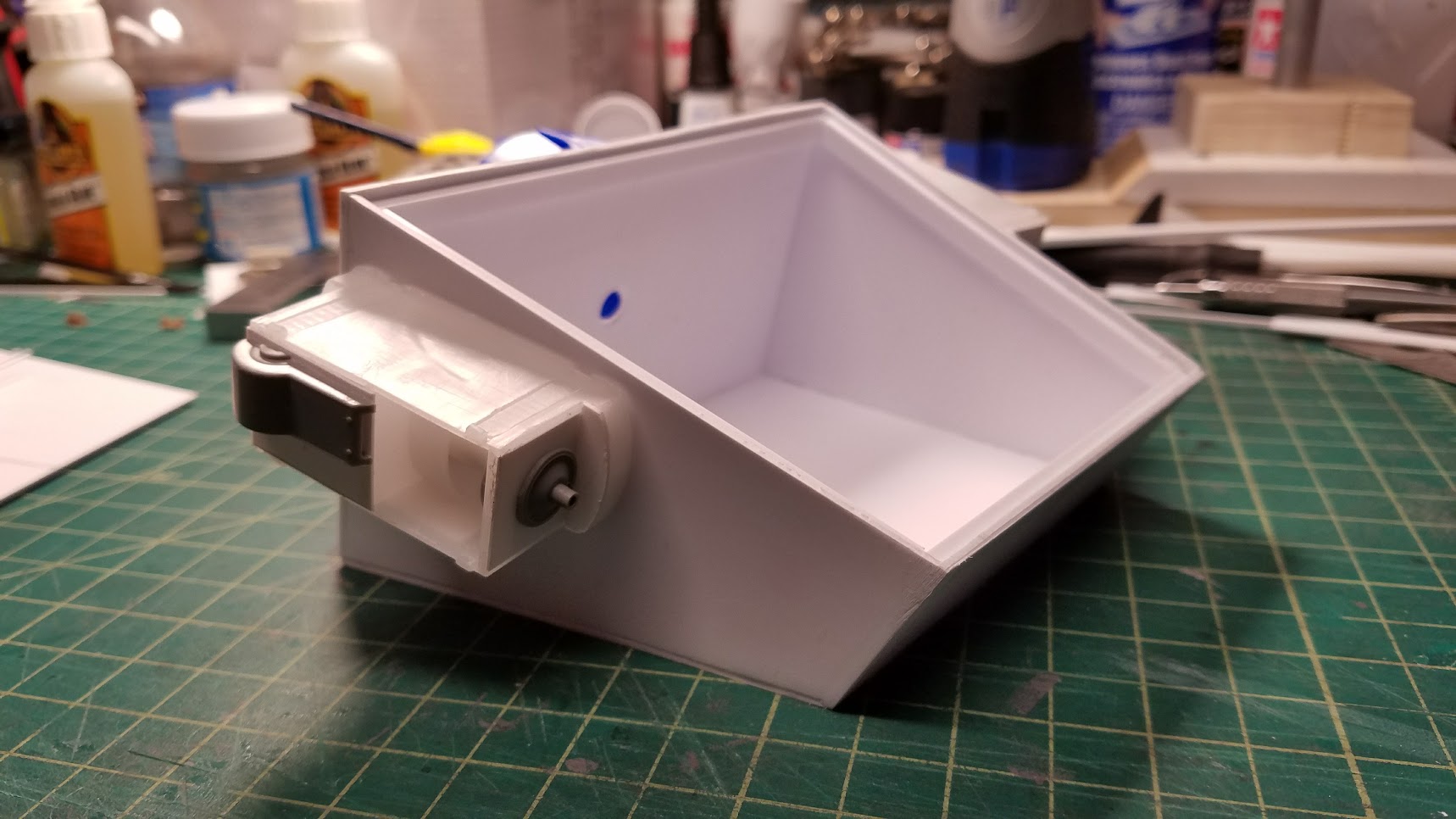 The top of the head is where the bridge is located. All of the ships during this time period had similar bridges, each one being its own variation. Note the whole for fiber optics to run. 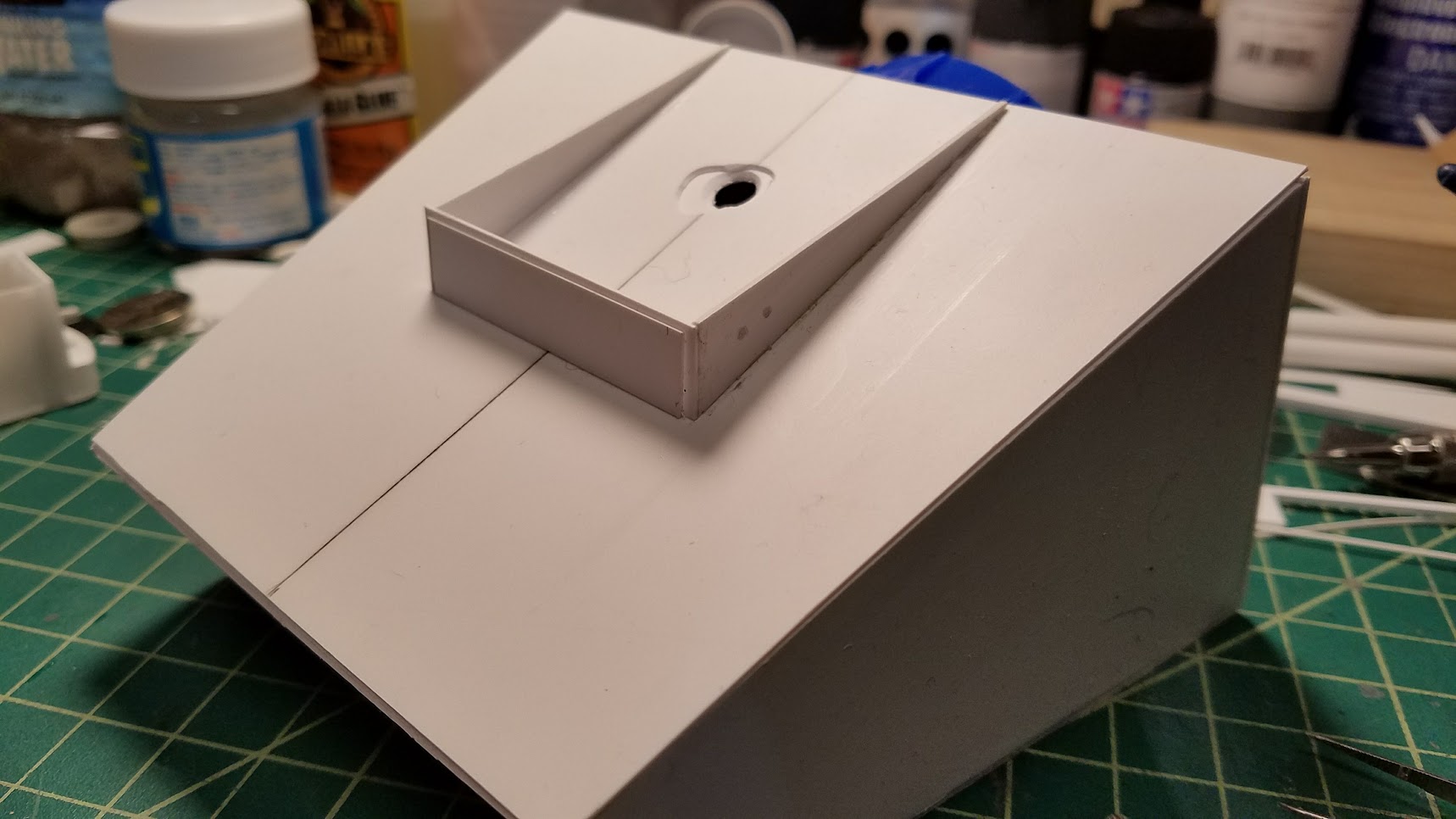 The front area of the bridge was often a target for enemy starfighters to attack so it gets extra armor. These are thicker pieces of styrene and some model kit parts. 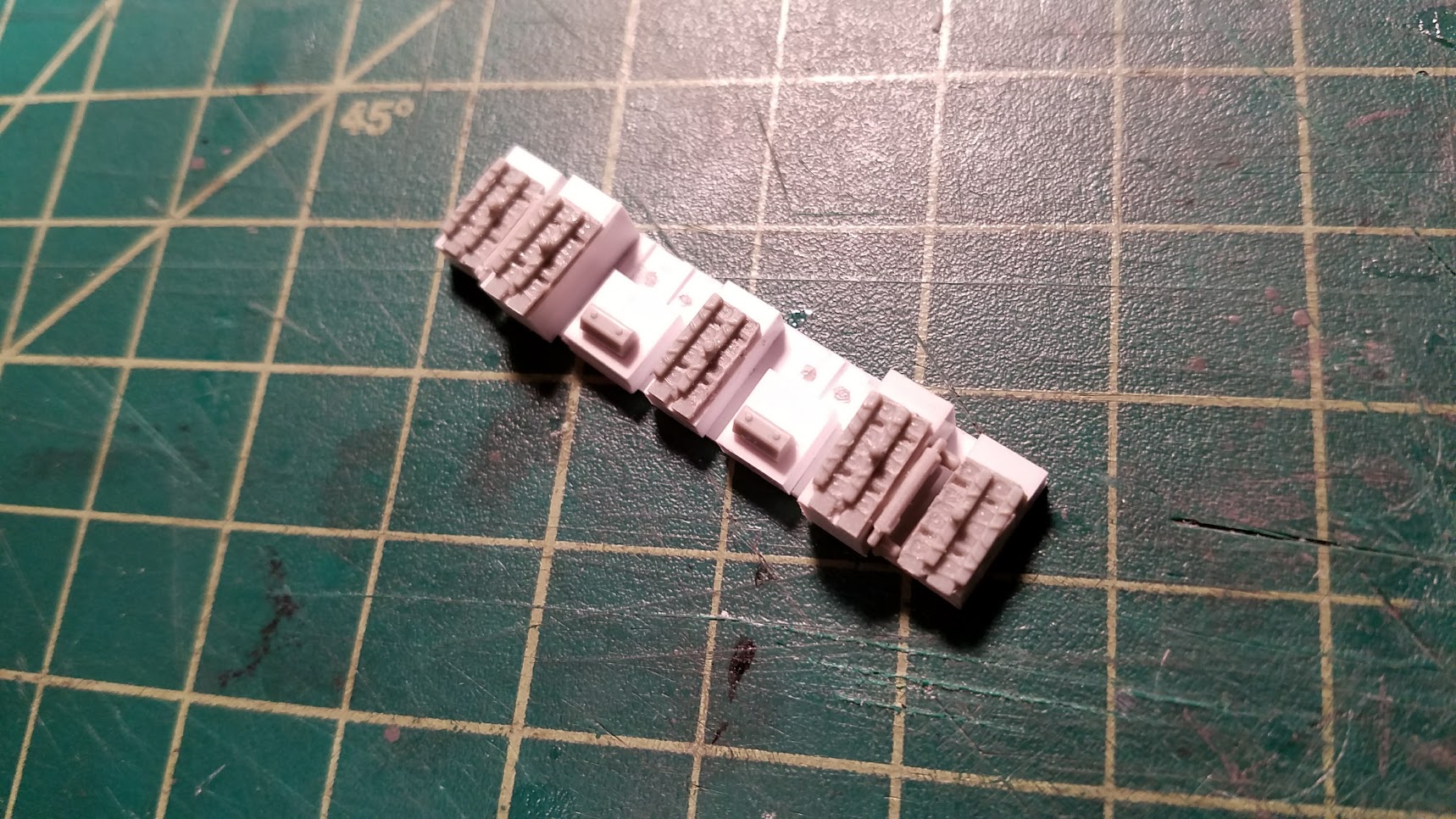 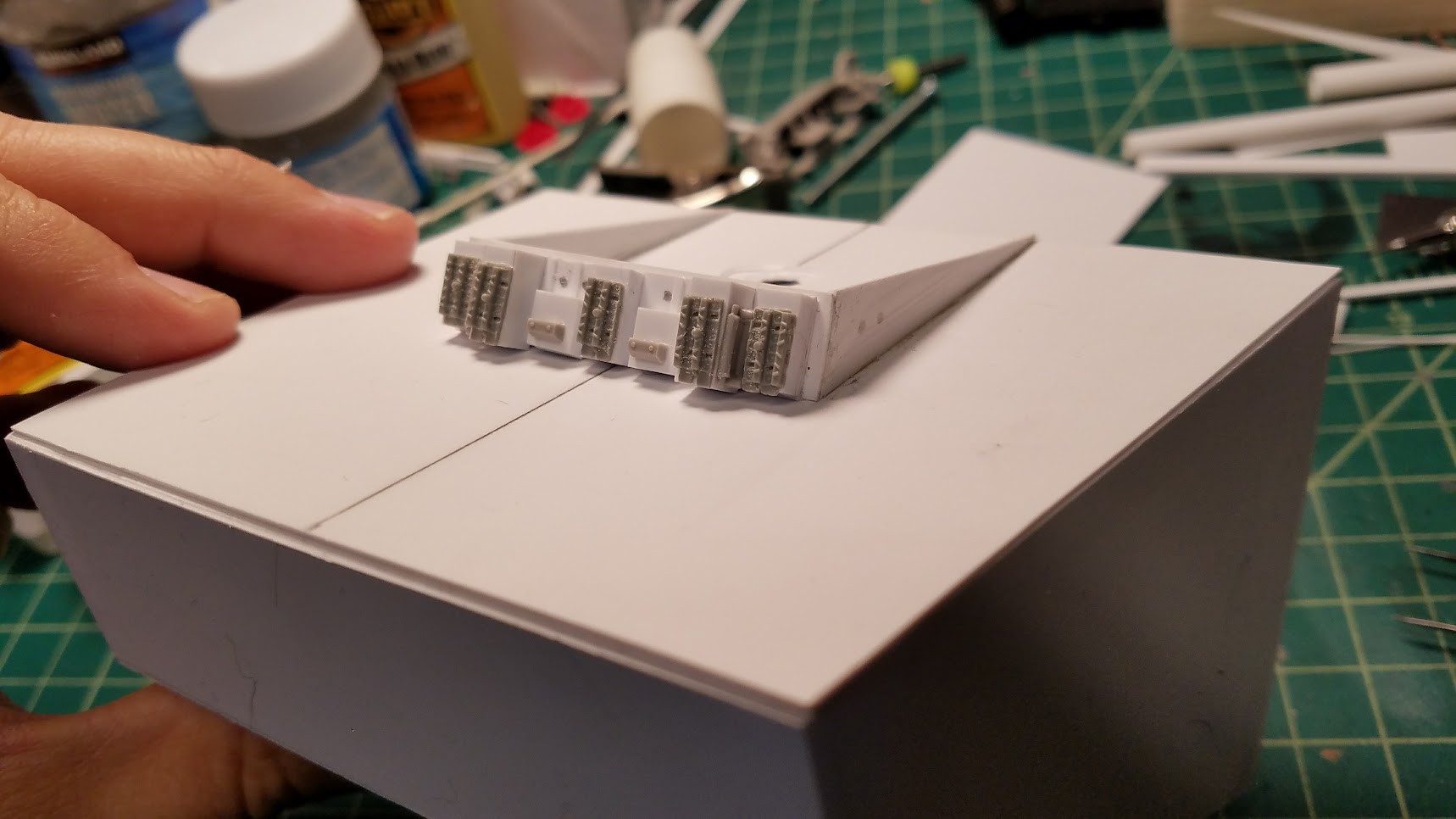 Fiber optics were then added to the bridge and a top was built. The size of the FO is 1.0 mm. 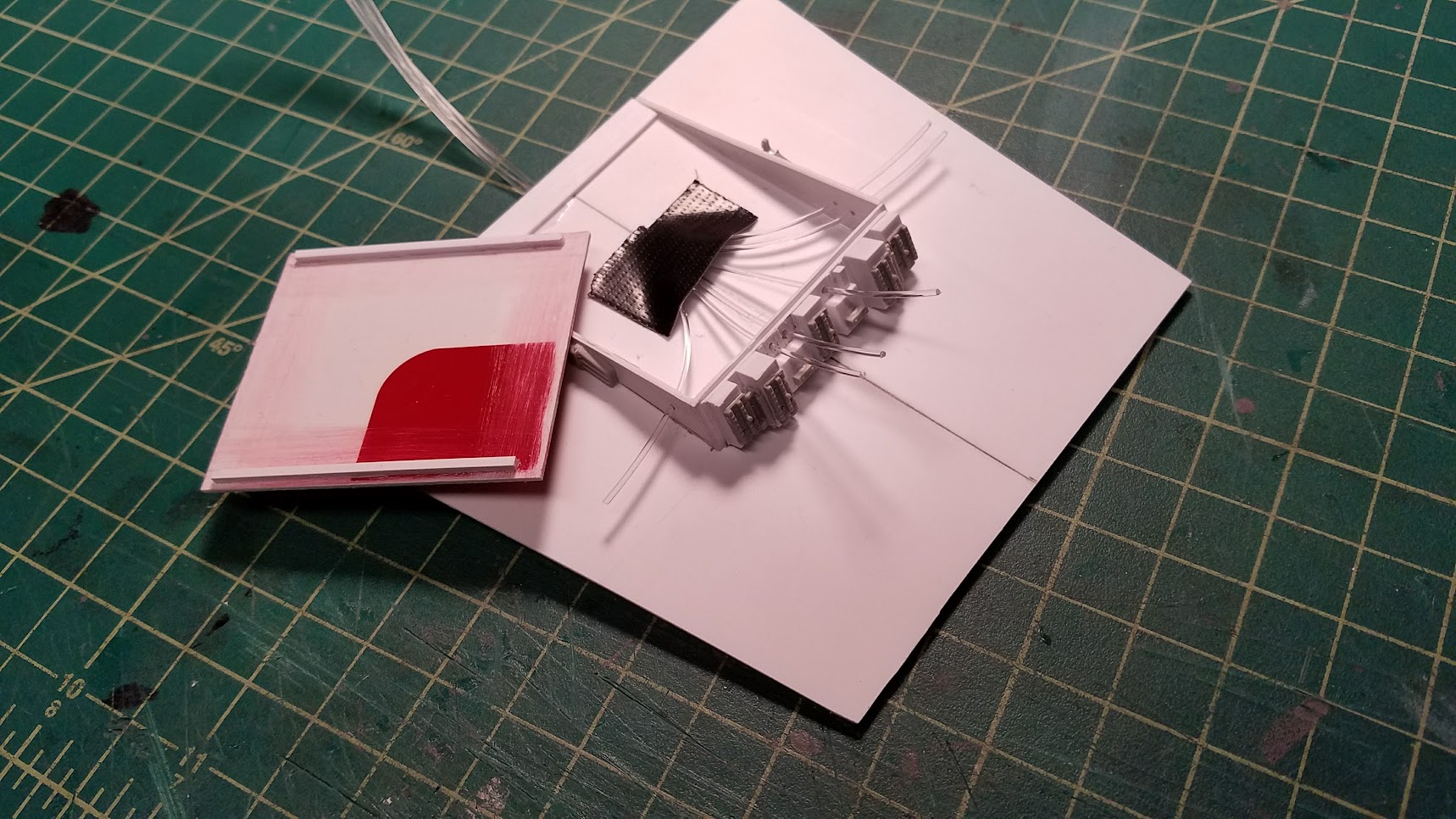 I started detailing the outside of the head next, in order to decide where the FO would go for portholes. I use a combination of plastic model parts and scrap styrene. It’s important to note that I’ve already established a look and feel for these ships with two other models, so I had to stay true to that style. Even the blue and orange juice bottle caps were used for neck mounts on other starships. 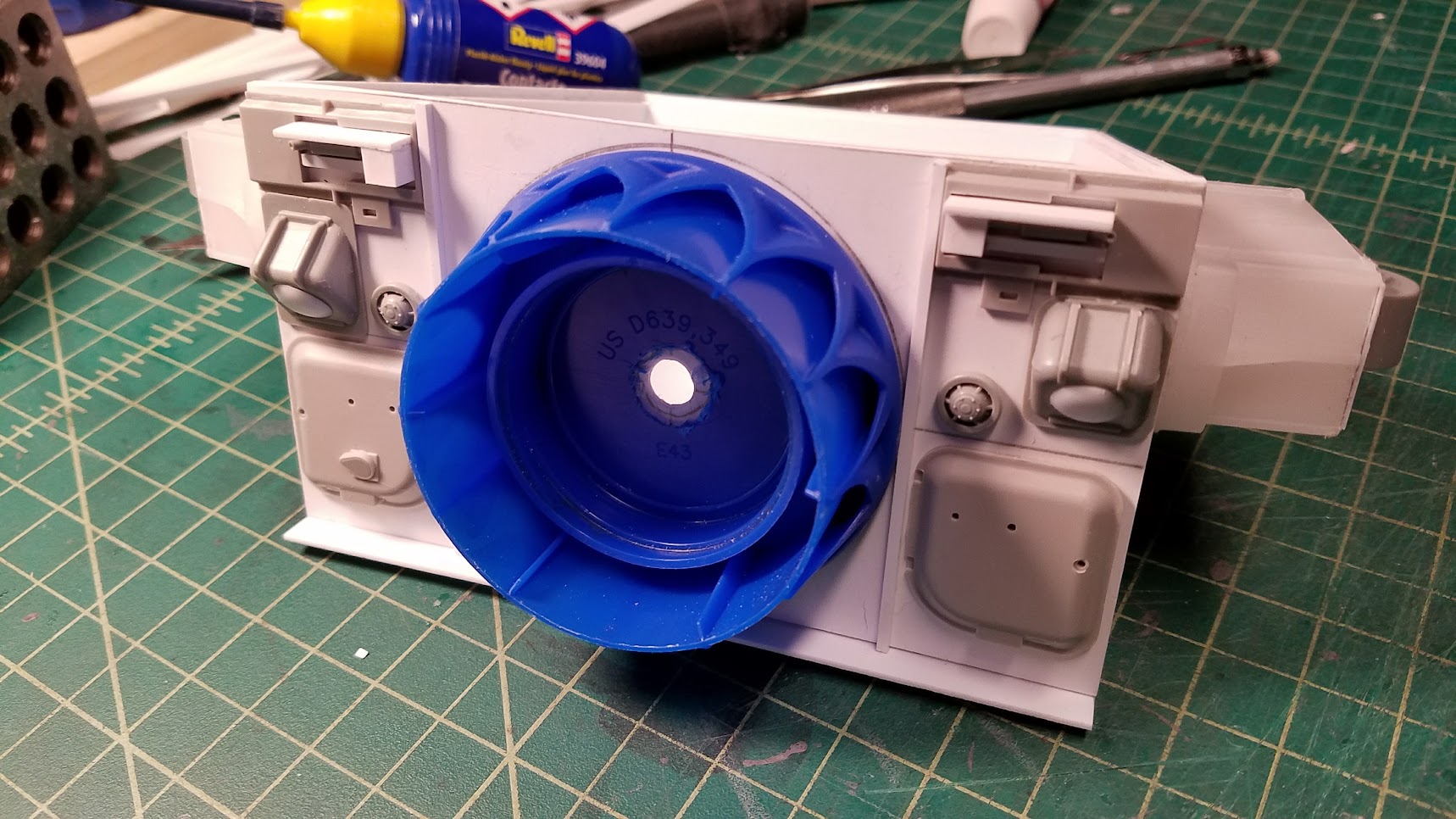 Moving to the bottom of the head I always start by arranging pieces on the model to see if I can achieve the effect I want with what I have on hand. I always try and purchase kits that have details I think I’ll need for each model I build. In this case a 1/72 German tank body fit the bill. With some modifications. You don’t want to just slap parts on in random order. You want to place them as if they actually have some purpose. In the case of the engine halves below, I didn’t use them here but did use them in another location. 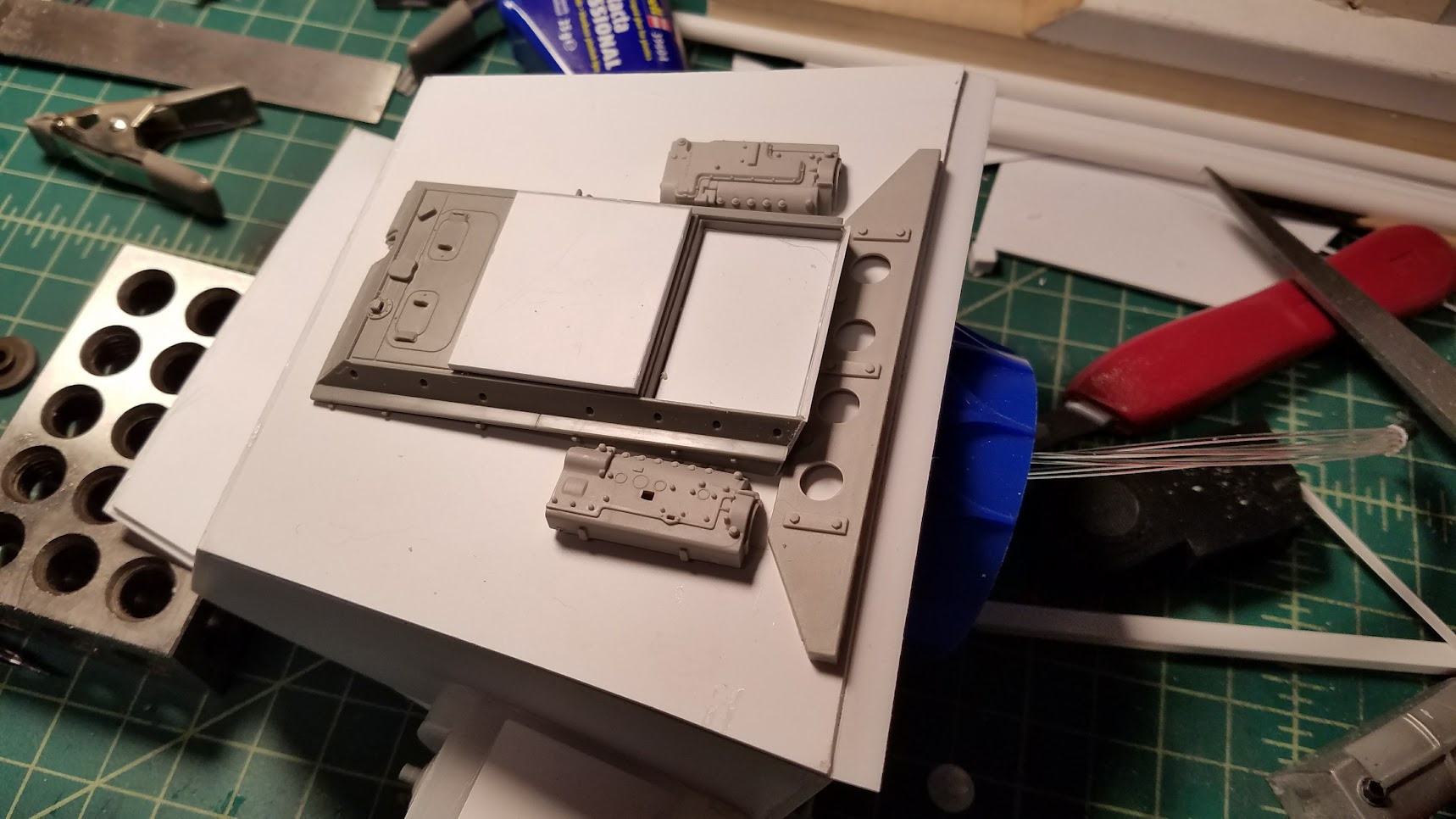 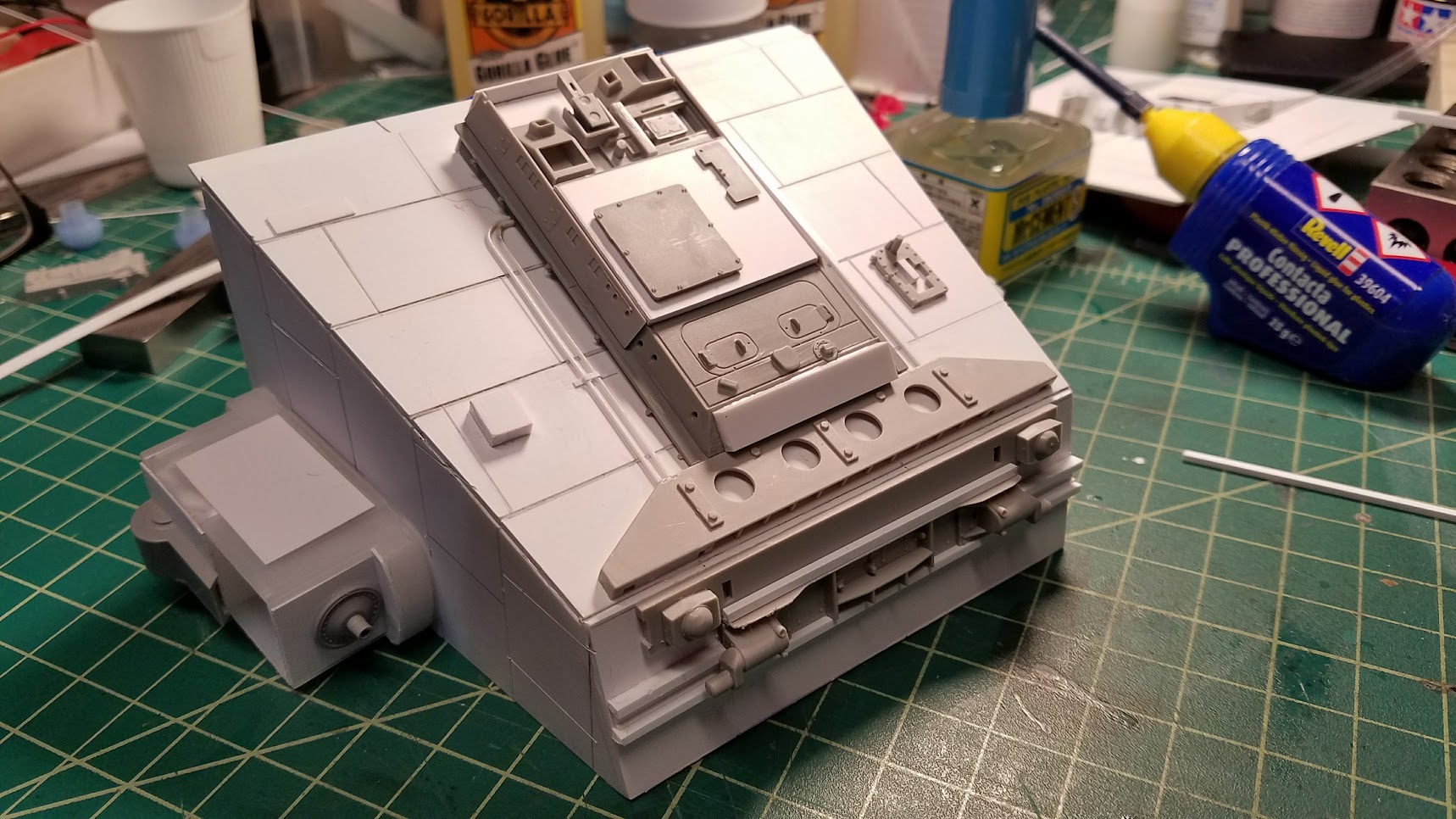 See how much the original placement changed over time? I’ve also started adding pieces to the nose. Scoring the panel lines was done BEFORE adding the model pieces. The top deck was scored too with some panels being smaller for interest. 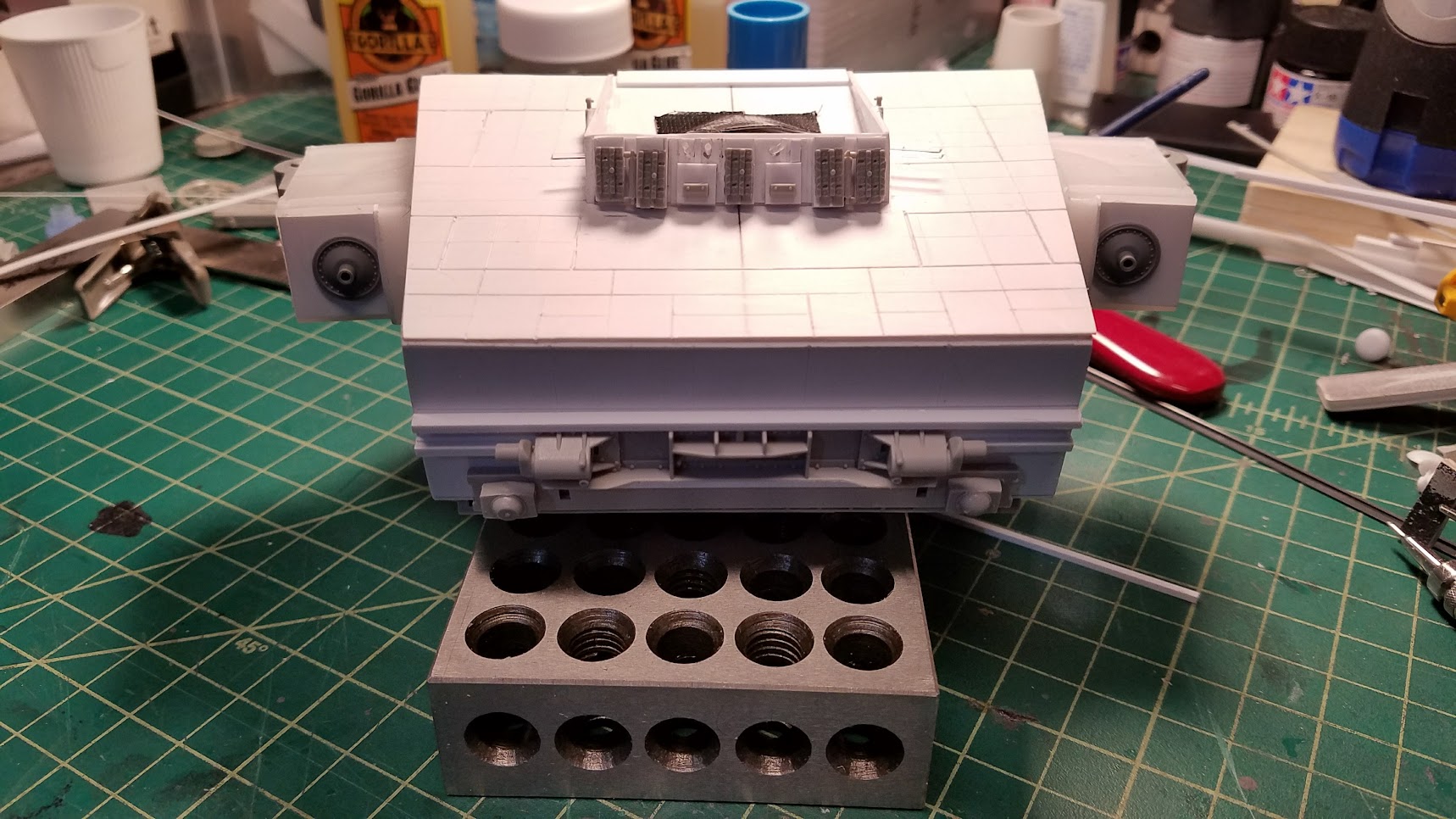 The back and bottom nears complete on the details. Some of the parts are model pieces and some are plastic bits cut and trimmed to simulate machinery. It’s a lost art these days with everything being computer designed. But it’s my favorite part of scratch building. 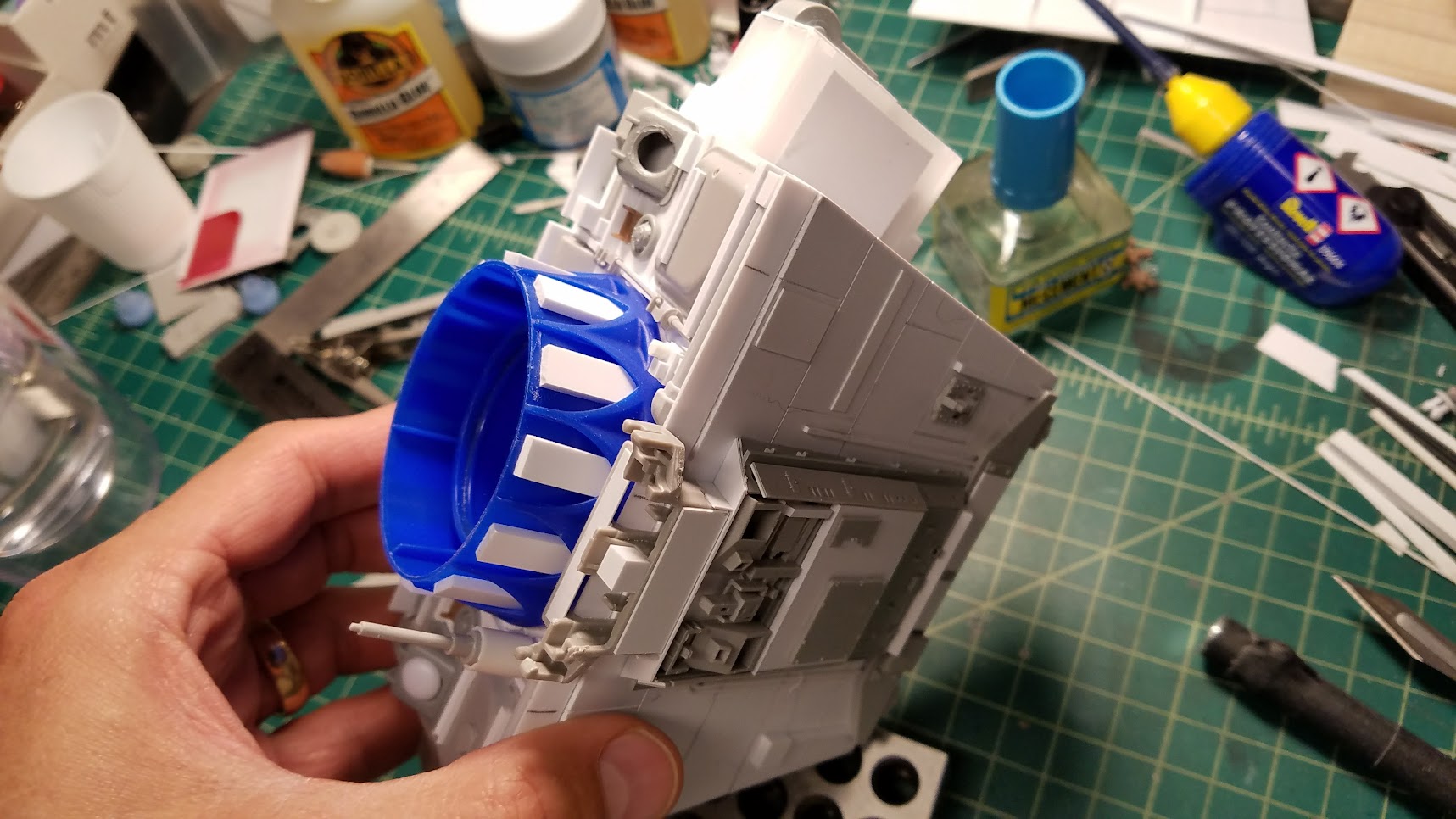 Next came the sides and that’s where most of the FO portholes were drilled and threaded. 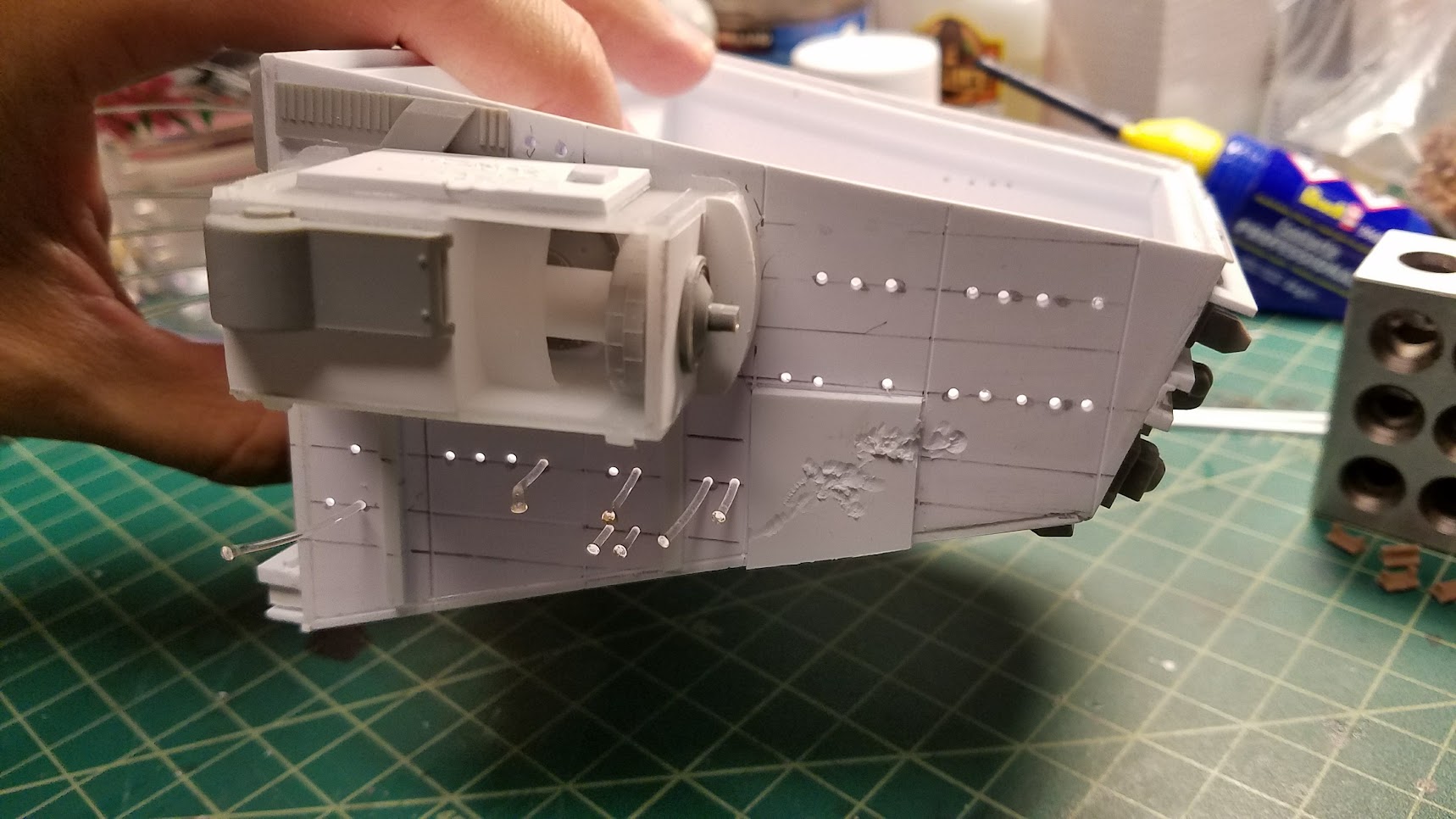 You can also see some battle damage created by my hobby grinder. Once the portholes are places and the FO threaded, I can started detailing the sides. I leave the FO fibers hanging out to be trimmed after it is painted. 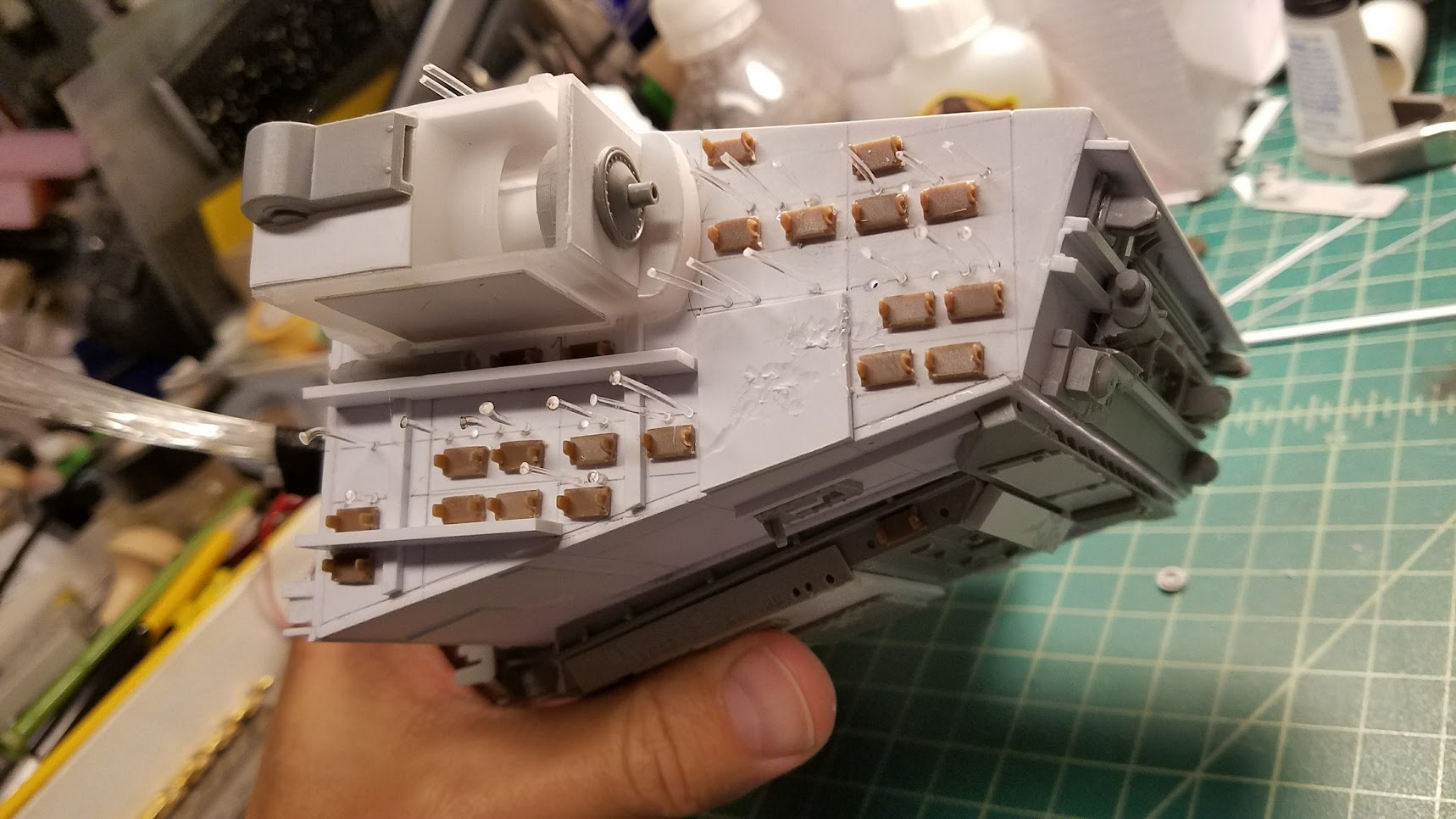 The tiny tan pieces are tread links from a 1/35 scale Russian BMP. In another model of this scale I used these as escape pods. So I had to recreate them on this model. 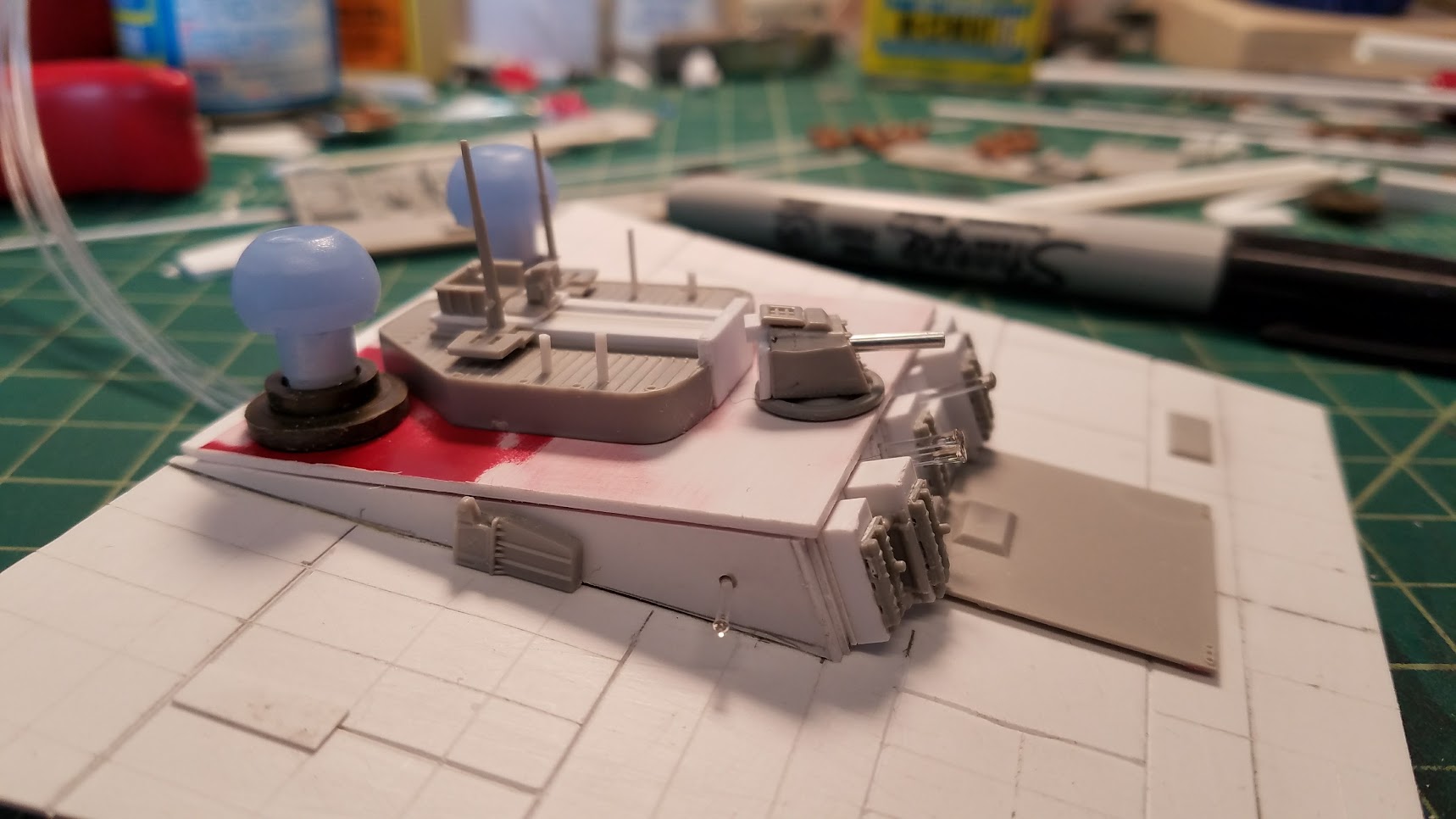 The top of the bridge area also houses some antennas and scanners as well as a big anti-starfighter gun. The gun was a modified destroyer model gun from a 1/350 ship model. I made my own large barrel out of metal tube. 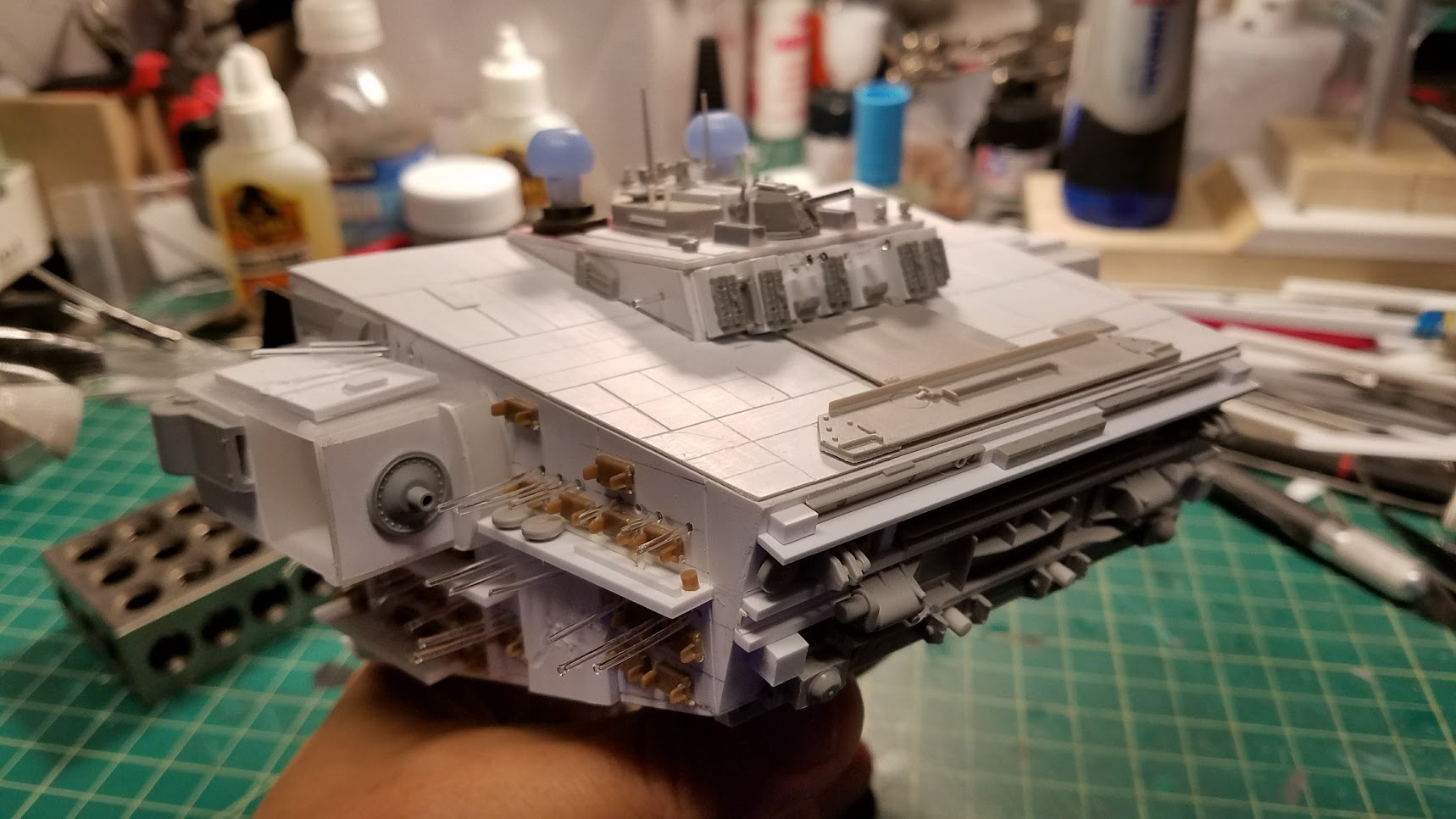 She’s starting to look like a proper starship head now. I particularly love how the nose details turned out. 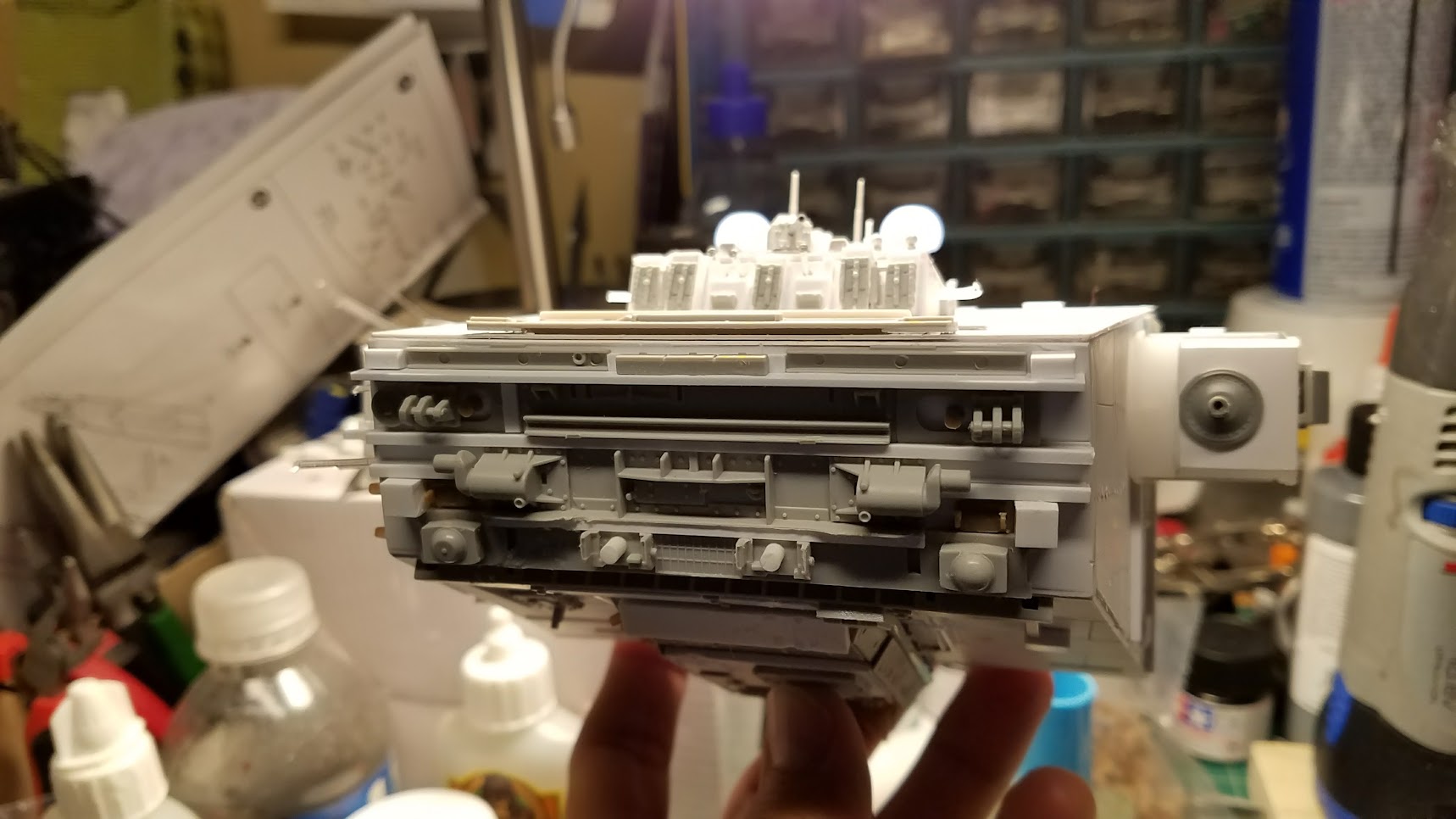 The completed head is now set aside as I begin to tackle the main body. 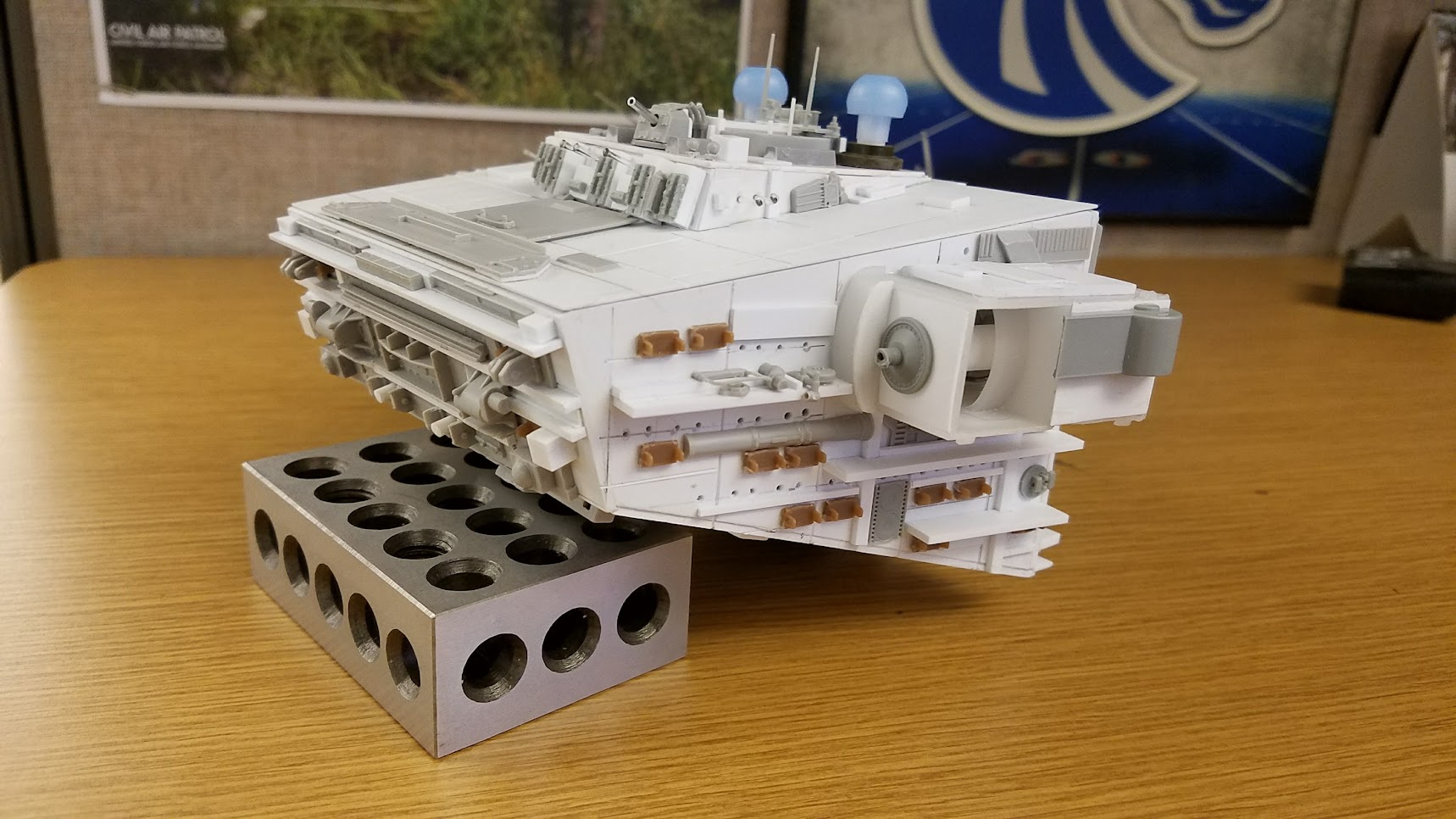