I’ve been making models of one kind or another since I was ten. In my teen years I probably built a model every week. I’ve built everything from the USS Constitution to balsa wood flying model airplanes. Tanks, battleships, airplanes and cars, I’ve had my fingers in everything.

My specialty was 1/48 scale plastic airplanes from WW2. I had a pretty large collection in my teens. In fact, I built every Monogram and Revel kit at least twice. Some of them three times, as I attempted to make clipped wing and tricycle landing gear versions of the Me-109.

Eventually, I’d destroy my older models either from fire cracker death or just because I no longer liked them anymore. But I never threw any of the pieces away. I collected them in model boxes and plastic bins. By the time my interests turned to making space ship models for the little 8mm films my friends and I made, I had a model shop in my garage that even ILM would be impressed with. 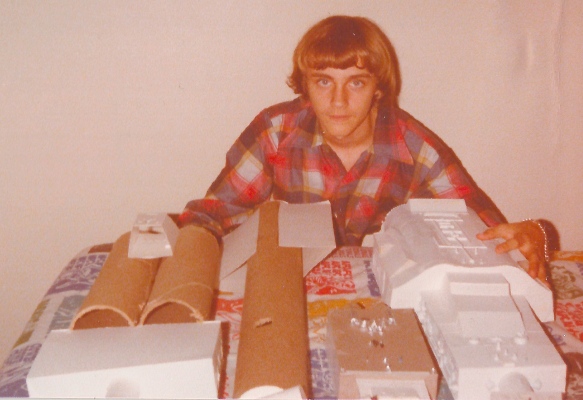 This is a picture taken of me when I was thirteen or fourteen years old in my bedroom. I’m showing off four of the largest spaceship models I had built from my epic Space Opera  film that never was, called Galaxy Collision. You may know it better as the second Star Trilogy novel, Starstrikers.

The model starships are from left to right; GCU Sokol, GCU Hood, GCU Chariot and GCU Constellation. All of them are made from poster board, cardboard carpet tubes and bits of long dead models. For you younger kids, this would have been circa 1978. Which explains my George Lucas flannel shirt and my Luke Skywalker length hair.

My dad’s garage was our model shop. We named it Microcosim which means little universe. My dad was a Ham and he frequently dabbled in photography and wood working and model trains and various electronic projects from radios to flying model airplanes. So we always had lots of cool junk laying around and plenty of room to build stuff. 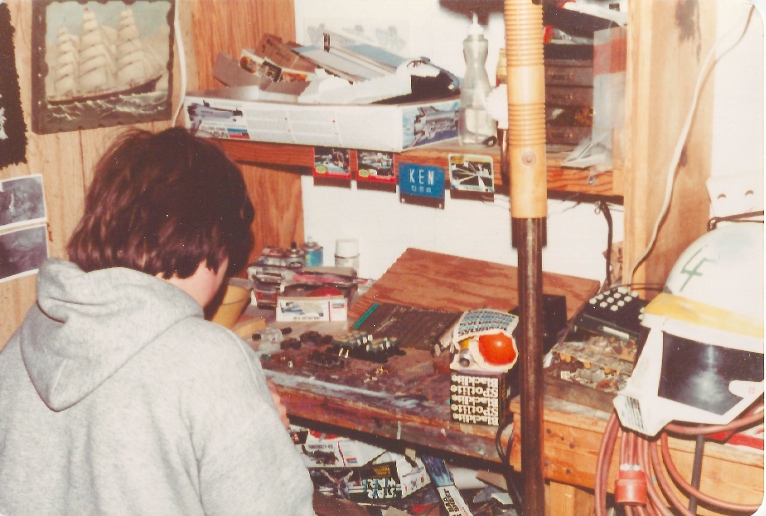 This is my good friend Jason Harrington at my model desk in the garage. He’s working on something for our epic, ten minute long live action Sci-Fi film, Renegade. There are many interesting objects in this picture. Model airplane boxes and a model X-Wing box and the actual model. The helmet was a stock kid’s helmet we painted up for our purposes. An old keyboard with the keys removed which was a prop in one of our spaceship sets and various model kits including a half-built Space Shuttle model. 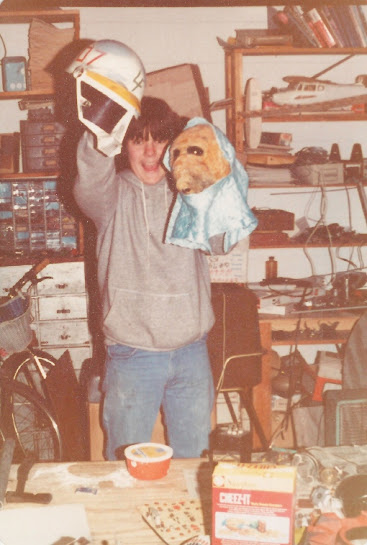 Here is Jason again with that helmet and an alien mask that he designed and built from scratch, just like they did it in Hollywood, with layers of liquid latex. I’ve always loved this picture of Jason. His smile was the very essence of our good times back then, making movies. It also shows off some of the variety of good junk in my dad’s garage. That brown box behind him? That boys and girls, is the old family Black and White TV, recently scrapped. The table before Jason was built for a model train set. By this time, we had taken it over to make sets for our film, Renegade.

Speaking of sets for Renegade, here’s the interior back wall of the Renoke behind the film’s star – me. I was no actor. But it was a silent film and all I had to do was walk around, shoot bad guys and run. No problem. 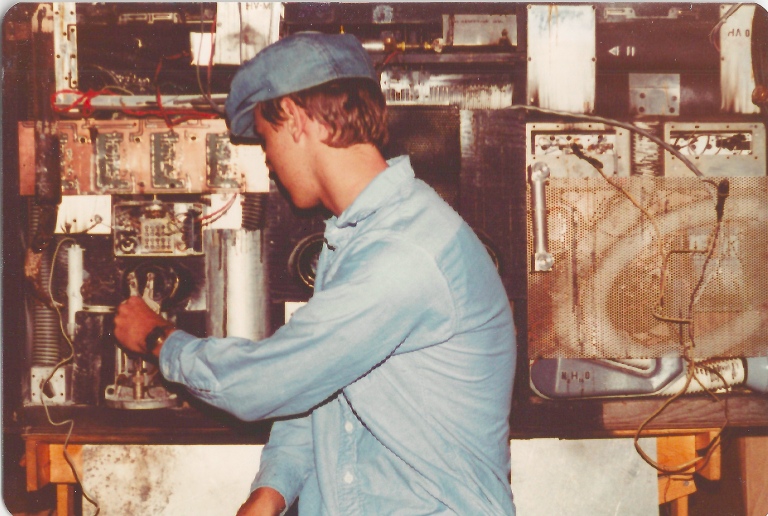 As you can tell, we made good use of the old radio junk in the garage to build this set wall. I was even dressed in my Joules Rouse costume which included an LED digital watch, because that was just too cool not to be used. Never mind that I was playing a criminal who had escaped prison and probably would not be wearing a golden digital wach. Did you notice my shorter hair? Yeah, I had joined the Civil Air Patrol and had to get a military style haircut. Not a popular look in the late seventies.

Stay tuned next time when I’ll show off some models we used in a film we never quite made in college called Mission to Vesta.

4 thoughts on “Models and Sets From My Past”