I was struck by how familiar the words of Lou Anders were in an interview he did for Adventures in Sci-Fi Publishing podcast. Bye the way, if you are not already listening to that podcast, you need to be. In that interview last year at Worldcon, Lou said that he recommended new authors put up their book on Kindle but then feed into it with other short stories or novellas and experiment with different price schemes for each of them. Build a franchise that people can associate with you as an author. Huh.

I obviously agree with Mr. Anders as this has been my strategy for several years now. All of my SF novels and short stories are set in the same universe and if you pick up one for free, such as my weekly offerings on Kindle or here on the web site, you can rest assure that each story is related to all the other fiction I’ve produced in the past four years.

I’ve begun to coalesce these stories into the same Star Trilogy brand. So if you read a Star Trilogy short story, you will notice it’s related to a novel in that trilogy. Each novel in the Star Trilogy has at least one short story set in the same time period. I’ve even tried to keep their covers the same by using similar colors, textures and fonts for each book in the trilogy.

Most of my crazy marketing is just me doing what I wish bigger publishers would do – build brand recognition with a unified look and feel. You should know that you are reading a Star Trilogy story by the cover and the font. My author name is always written in the same font. Sometimes, as in the novel Tyrmia, the title is in a different font style, but the name is always in Bombardier font. 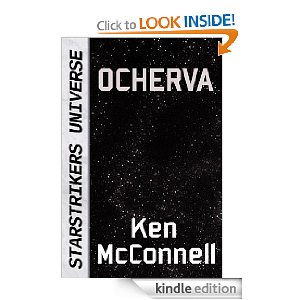 Those readers of mine who have actually read through my cannon, will tell you that I’ve been slowly building a very complex universe that can only truly be appreciated by those who have read everything. That is by design. I like writing stories in the Star Trilogy universe. I’ve created a vast and interesting universe that fills three separate time periods. No easy task, but when it’s done right, can be a unique reading experience. People love to read a series because it lets you return to the author’s fictional universe time and again. But imagine if every time you went to that author’s universe, you could be introduced to new characters and situations that you might never have known existed? How cool would that be? Well, I’m trying to find out.

The end game here is to have readers identify with my universe and in the end, identify with me as an author. I don’t have a time frame on this process. By most accounts I should be about ten books into the series and dozens of short stories until I eventually find an audience. Even Lou admits that authors with a big back list tend to earn more over time. But until you get that back list, you eek out a pittance and keep writing. This fall I will have four novels, one anthology and a half dozen unattached short stories set in the Star Trilogy universe. So I’m almost half-way to my ten book long range goal.