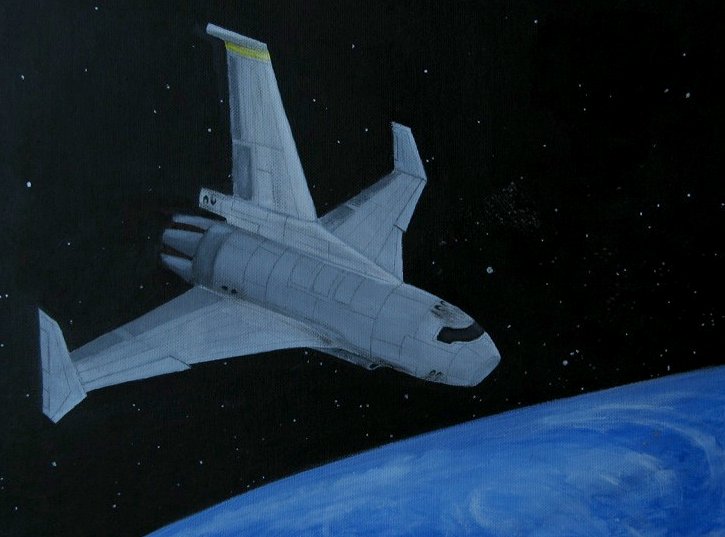 This is the first part of a long, multi-post series on writing believable starfighters in Military SF and Space Opera. Too often writers don’t have an extensive knowledge of military vehicles and when they write Military SF that involves hardware, their stories lack credibility with readers. Many times stories about starfighters come off as a rehashing of Top Gun, Star Wars or Battlestar Galactica. Readers see through such thinly disguised attempts and are turned off by your story before it even has a chance.

I’m not saying that you have to have served in the military to write about starfighters, but I am saying you should do some homework on real jet fighters and rocket ships before attempting a story using them. Just as any good Fantasy writer has a more than passing interest in ancient history, a good SF author should take the time to understand modern military hardware.

This means spending time reading books about pilots and studying real planes up-close. You should read first hand accounts of arial combat by pilots from WWI, WWII, Korea, Vietnam and Desert Storm. Biographies are especially important as most pilots love to describe in detail their experiences in combat. Take notes and then try to imagine what those same experiences would be like in space.

If you can get to an air show, that is the best way to experience combat aircraft up-close. Sometimes they will let you sit in an actual cockpit or walk up and touch the metal and fabric coverings of these aircraft. Smell the aviation gas and oil coming off the engines. Talk to actual pilots about what they liked or didn’t like about flying a particular airplane. Absorb this information and it will come out again in your starfighter story.

The masters of SF intuitively understood this research. When Heinlein writes about a spaceman coming down to a planet and wearing unstylish clothes and acting like he own’s the place, those details are extracted from observing real pilots. *Double Star opening paragraph. It resonates with readers even if it’s about imaginary things.

Pilots and ground crews have their own lingo and not all of it is technical. They abbreviate things and call other things by strange nick names. You don’t have to use what’s common now, but it should get you thinking about what your pilots would say about their starfighters.

Military aircraft all have official designators and those letters and numbers usually mean something. For instance, “F” usually means “fighter” but before that “P” was used which stood for “Pursuit”. The numbers are usually sequential to when the aircraft entered service. The F-15 entered active duty before the F-16.

Don’t just make up some random series of letters and numbers and expect your reader to be able to pronounce it in their heads. XRS55QB is probably not a good designator for a starfighter. Readers can’t relate to random strings of digits, it’s much better to pick a name and use that name instead. Fighter planes all have one official name and usually pilots who fly them give them appropriate nick names. For instance the P-47 from WWII was officially known as the Thunderbolt, but pilots called it the Jug because is was big and heavy, like a jug of whisky. Try not to confuse your reader by using more than one nick name or official designator.

In my novels I always try and use the starfighter’s official name. For instance in Starforgers, the Stellar Rangers flew Scramblers. I never mentioned that they were actually called Terra-Tyne SF-44 Gull Scramblers. That’s too much information and too hard to keep straight. But by shortening it to Scrambler, I was able to put the image of scrambling pilots into the reader’s head. The Rangers who flew them were like interstellar cops, so the name also brings to mind a police car.

Also in Starforgers, the enemy starfighters were called KIV-3 by the enemy pilots and a more descriptive name by the good guy pilots, Eight-fighters. The starfighters had wings that look like a figure eight. This harkens back to Star Wars with all the wing shaped fighter names, X-Wing, Y-Wing. I had originally called the KIV-3 an Eight-Wing but beta readers thought it was too much like Star Wars. How about them Beta Readers? Good on them.

The reader has to have a clear image of what your starfighter looks like while reading your story. If you leave too much to the reader’s imagination he’s going to think it looks like an X-Wing or a Viper. You should spend a sentence or two on describing its distinguishing features.

“… two silver winged Scramblers sat waiting for them. Steam from the liquid nitrogen fuel cells evaporated from the metal birds. The deck was bright with the reflected light from the suns glaring off the polished metal of the Scramblers… The shinny silver wings of the nimble Scramblers flashed with reflections from Ocherva’s twin suns as they broke free of the moon’s atmosphere and flitted into the blackness of space…”

Those are some random sentences where I described the Scramblers in Starforgers. I add minor details as I go, careful not to info-dump on the reader a whole paragraph of description.

Here’s another passage or two in which the hero is seeing the Eight-fighter for the first time.

“The cylindrical fuselage ended in a conical shape that was black and impenetrable. There were markings on the side that reminded her again of the war planes from antiquity. This ship was obviously a military fighter… there were two rectangular cut outs in the squared off main wing. It reminded her of the number eight…”

Another thing you could indicate is how the starfighter handles, but only if it applies to how it’s used in the story. In my short story Red Allen, I describe key internal systems as they relate to how the fighter handles or does not handle as in this case. The story was about a test pilot who had to isolate why a certain model of starfighter was always crashing. So this story was a technical mystery of sorts.

As in all Sci-Fi the level of technology in your story must be consistent. You really have to give this more than just a passing thought or you’ll end up regretting it later. Does your starfighter have shields? What kinds of things can get through the shields? How much power does it take to run the shields? Does the starfighter shoot projectile weapons or use laser weapons. Does it make unusual sounds inside the cockpit? If it does make sounds don’t tell us by using words that describe. “The crash avoidance computer whined in protest,” is always better than using beep or bop words.

What kind of life support is there? Do the pilots wear masks? Enclosed suit with helmets? What if battle damage causes the air to leak out? Does the ship have an AI that runs itself or is it strictly human or alien controlled? What kind of scanners does it have and how powerful are they?

In my novel Tyrmia, I have a starfighter that uses a retractable scanner sled that unfortunately for the crew, gets damaged and starts to spin while its scanning. This causes the fighter to be hit with an EM burst which of course shuts down all the electronics in the fighter, causing it to crash. The same fighter had an AI that helped the pilot without getting  in her way in times of crisis. If I hadn’t taken the time to think out these things, the events of the plot would not have happened.

I’m going to wrap this post up and save the rest of my topics for Part 2, Part 3.