The O2 Titans went up against the Tetra-Tech Titans in an epic football battle this morning. The TT Titans were bigger and more intimidating, but the O2 Titans were scrappy, and patient enough to pull off the victory 18-14. The O2 Titans got on the board with the very first play of the game when Joey Banks returned the kickoff for a TD. No point after try (PAT) was earned. 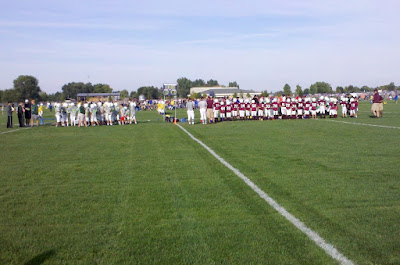 The TT Titans came right back and scored on their opening drive and earned a PAT. The game was pretty evenly matched, despite the low final score. The O2 Titan Defense stripped the ball at mid field and Joey Banks ran it back for the first defensive TD of the game. After a missed PAT again, the TT Titans drove the ball down to inside the ten and then caught a TD pass for the score. Their PAT was stopped by the O2 Titan D. 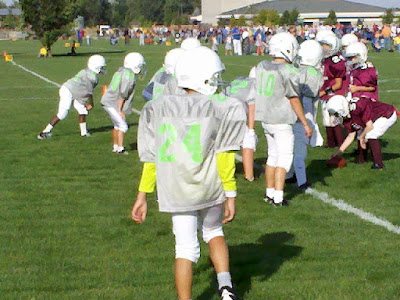 After another ineffective stand on offense, the TT Titans got the ball and started marching down the field. But the O2 Defense stepped up again, stripping the ball and running back their second TD of the day. This time is was big #72 Talan Floyd who lumbered half the field and stretched across for the TD. Yup, the PAT was missed again. 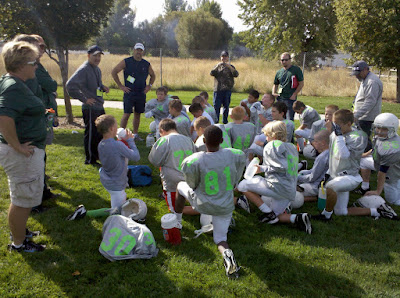 With time running out in the forth quarter, the O2 Titan Defense was backed up inside their ten yard line as the TT Titan Offense pressed for the kill. On the third down, the TT Titans ventured a pass that was intercepted by O2 Titan’s corner, Dalton Simpson. With the ball back, and up against the goal line, the O2 Titans ran down the clock and the game was over.

Congratulations to both teams for battling tough for the whole game. The O2 Marketing Titans are now 3-0!