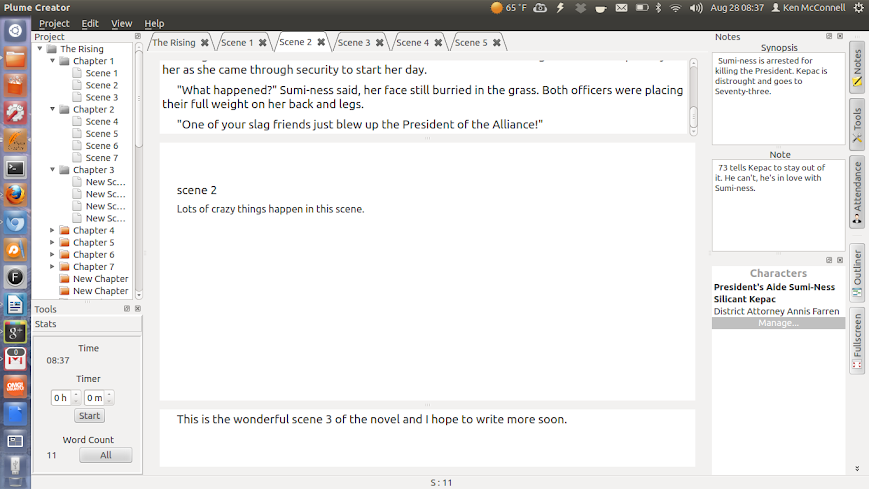 Someone needs to build a writing tool that is better than Word and Write for editing a novel. The biggest issue I have with using a word processor is that they just don’t handle larger documents gracefully. How hard is it to buffer a 400 page rtf file? It must be more difficult than anti-gravity cars. Because nobody has done it yet.

The commenting features of these modern word processors are great. Heck, live editing in Google Docs is really cool. But even Google Docs chokes on loading longer documents. Novels can be hundreds of pages in length, especially an Epic Fantasy novel. Why can’t I load and edit such a long piece of TEXT easily on my computer? It’s TEXT!

Anyway, here I sit, using Write to edit my novel and wondering why I have to suffer with such a simple concept. I have other beefs with these programs too. The biggest is the lack of a portable dictionary of words added to the document. WTF people? I make up all kinds of words in my novels and carefully add them to my document dictionary and then I open the novel in another computer and bingo, now all my words are forgotten. I really dislike that.

Okay, back to the editing.

A common question that new writers ask is what tools do you use to write with?  I have used just about everything under the sun, from Vi to Scrivener.  What I use now, may not be what I use later, but it’s what I’m comfortable with.  Being comfortable with your tools makes all the difference.

I use a white, Intel MacBook, with 2 GB RAM and running OS-X Snow Leopard.  I write in Open Office Writer and I use the Open Office Calc program to do my outlines in.  I use the Mac Dictionary and sometimes a browser to do research.  I back up my files using Dropbox.  This arrangement lets me move from the laptop to the Linux box in the garage without being tied to either OS for a specific program.  On Linux, I use Ubuntu 9.10 on a 512 MB Pentium 2.

The Linux box is on its last legs and I would like to replace it with another laptop, probably an HP 13 inch model about the same size as the MacBook that I will install Ubuntu on.  But unless the MacBook dies on me, I will make due with these old machines.