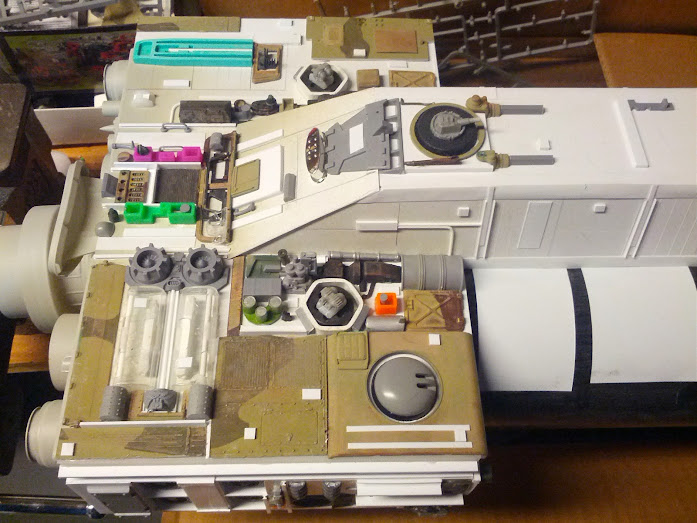 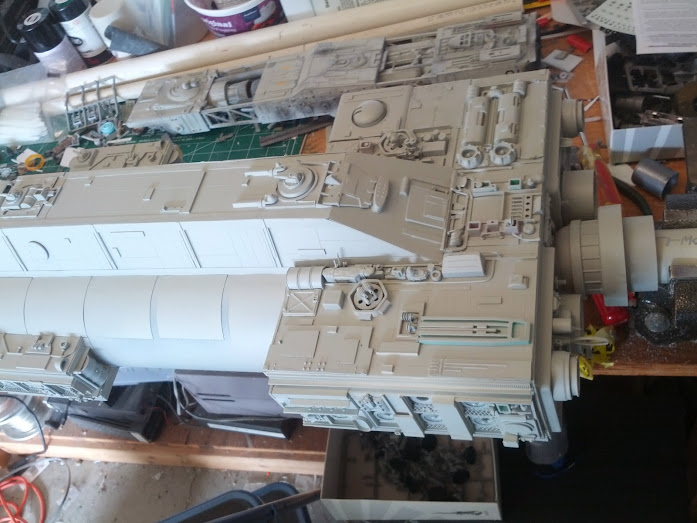 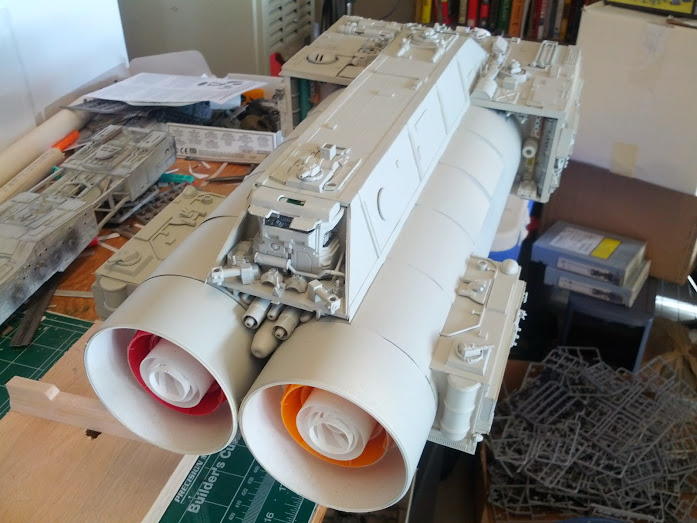 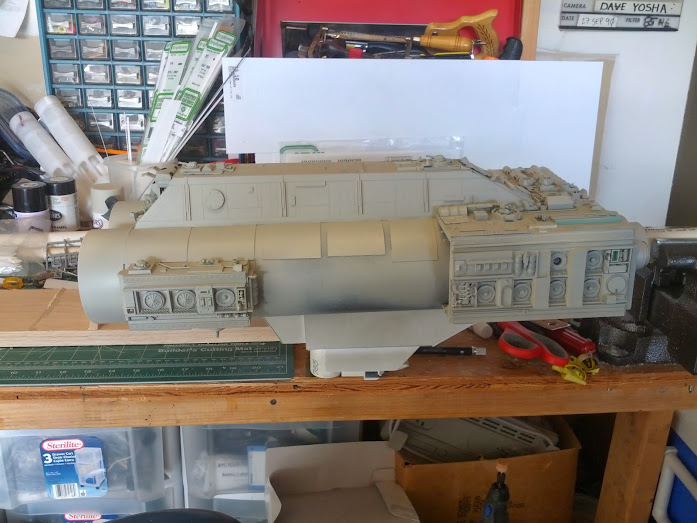 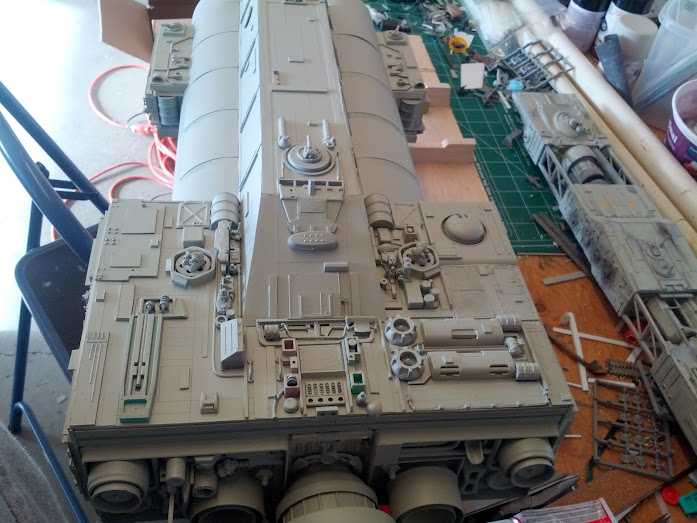 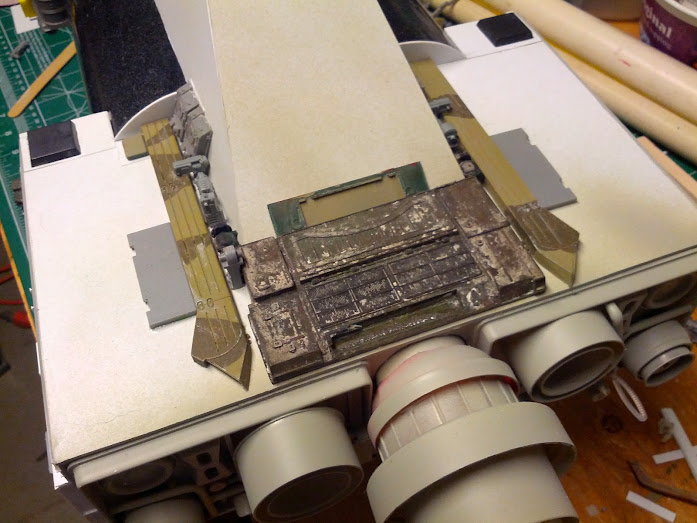 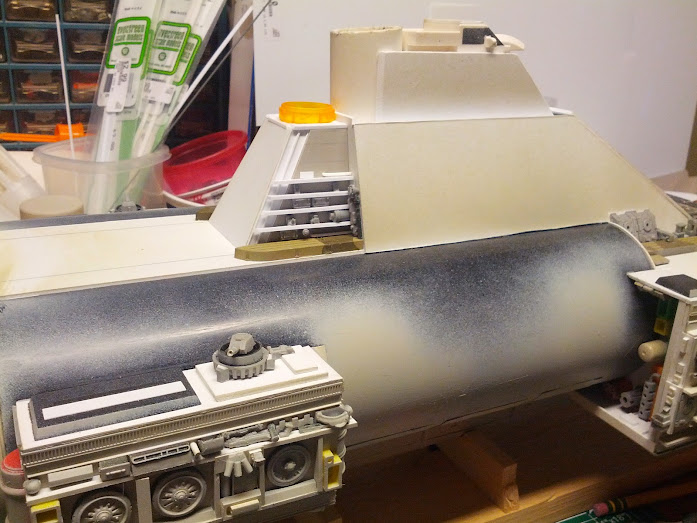 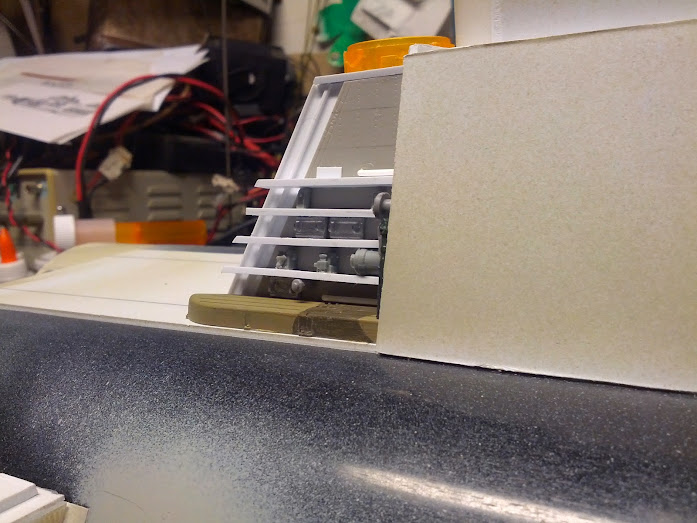 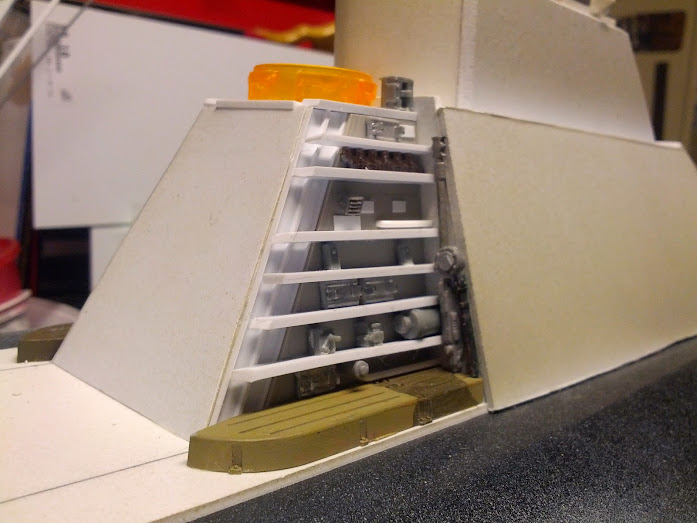 This weekend I finished up the starboard sides with details on the stern gun pod and the main guns. I went with a single gun turret on top and will put another on the bottom later.

Here’s the finished stern gun pod. I tried to match it to the port version as much as possible and allowed for some variation due to repairs and such. The plan is to put thin panels on top of the black PVC tubes. That will come later on in the build. I’m particularly   fond of the thin line of details above the gun ports.

This is the start of detailing on the starboard main gun decks. The rails are up and now on to the gun pits. Computer nerds may recognize the tan piece as an old rail for PC cases. The washer is protecting an open gun port.

Here we are mostly complete and looking a bit smoother than the port side. I like to make the sides a bit different, again due in part to maintenance and upgrades in progress.

Ignoring the pretty star pattern of spray paint on the black engine tubes, this is the detail inside the area behind the gun deck. I think we can stick some more tidily bits in there yet. Yes, that’s the handle of a disposable razor (green).

This is a top view showing both completed stern gun pods. Starting to come together. That empty area behind the top secondary deck is where I’m going to build a hangar deck and launch pad for the squadron of starfighters that are based on the Sokol. I know, insane.

Reason you don’t glue the head on until you’re finished; so you can use the neck to hold the model in a vise while you detail the bottom. That movie slate was built by yours truly for use in a feature film from my past. I used to be an Assistant Cameraman.

Working on the keel. Staying traditional with scoring and panels. A few details where I can get away with it and keep it flat.

Close up of the panel scoring on the bottom of the keel. I’ve only just started this process, so things will change. I stowed the kids bikes in the garage, which means I can get two cars inside and still have room to work at my bench. You can see my portable heater on the cement floor in one of these shots.

In the past 24 hours I’ve focused most of my efforts on the bow and bottom of the Sokol’s head. I’ve used parts obtained from my good friend Nate’s old Warhammer models for most of this detailing.

You may have noticed the swank new cutting mat. Yeah, it’s fine. I also worked hard on the bottom of the head. I added two gun turrets to the bottom, along with tracking sensors. One of the sensors is exposed for maintenance.

It’s a bit hard to tell in this pic, but I also scored some lines on the bottom and then added little square pieces of plastic. The orange piece is a greeblie acquired last week from the dollar store. It makes a great lower deck.

The last thing I started, but didn’t finish was the port main guns. I was able to add some strips of detail to the top and bottom and added some struts and greeblies. But most of this will get covered by armor plates. I’ll show you what I mean after I build it.