You may have noticed that some changes happened in June to my back list. The first change I made was that I raised prices on all of my ebooks across the board except for Corvette. Corvette is the introduction to my Star Saga and it is also the first book of at least three featuring the same crew. So it will always be .99 cents. I raised the other novellas to $2.99 and regular novels to $4.99. I did this because after having some success with Corvette, I wanted to increase the value of the rest of the Star Saga novels.

For that first week in June, sales stayed pretty much the same. Which in this case, is a good thing. The second change I did was take all my ebooks out of other markets and put them exclusively on Amazon in the Kindle Select Program. This earns me pages read and that, it turns out is where you make your money on Amazon. At least for now.

Did anyone protest not being able to get my books on Kobo or Nook? Nope. I have no audience there to protest. My sales on both of those platforms were dismal. Now that I’m all in on Amazon, sales are maintaining and not starting to dip, like you would expect three months after the release of a best seller. So far, June is going to be at least as successful as May was and that’s a good thing. Because sales of Corvette are eventually coming down. That’s normal.

Next month, I’m releasing a new novella set after the Starstrikers novel. I’ll do the usual pre-sale thing for a week before it launches and then hit my reader list with the announcement of when it comes out. So far my most successful pre-release was Devon’s Blade, but Corvette was close. I’d love to get at least 30 pre-sales of K’nat Trap so that launch day will make a splash. K’nat Trap will debut at $2.99 so that if needed, I can run sales on it later.

When you write your own novels and publish them yourself, like I do, you have to be part writer, part editor, part salesman and part cheerleader for your own work. It’s not easy and most writers decide to quite after seeing how much work is involved. But for those of us who persevere, you can find some success.

Hopefully K’nat Trap will have some success and that will carry sales over to the end of summer when I hope to be finished with Corvette II. I will try to get the third Corvette book out by Christmas to boost sales again. We’ll see if that happens. Starting next year I will be writing Book 5 of the Star Saga and that will take me much longer than the novellas. I hope to have it ready to publish by Fall of next year.

How well the Corvette sequels do, will determine how many more books in that series I write. If after the third book people are still loving them, I have plans to write another trilogy using the main character. So I could be writing more Captain Vance novellas on into 2018.

Below is the rise from obscurity that happened for me when I released Corvette in late March. The only thing that has sustained me three months later is my back list. I have far fewer sales for the other books in my series, but enough to keep income at a decent rate. Ideally, I would love to release a new novel every three months. But I simply don’t have that kind of time for writing. I suppose that will keep me at my day job until retirement or a movie deal. ;-) Which I’m totally fine with. At this rate I’m looking at about 30-40K per year from my fiction writing. Which is not a bad second job. 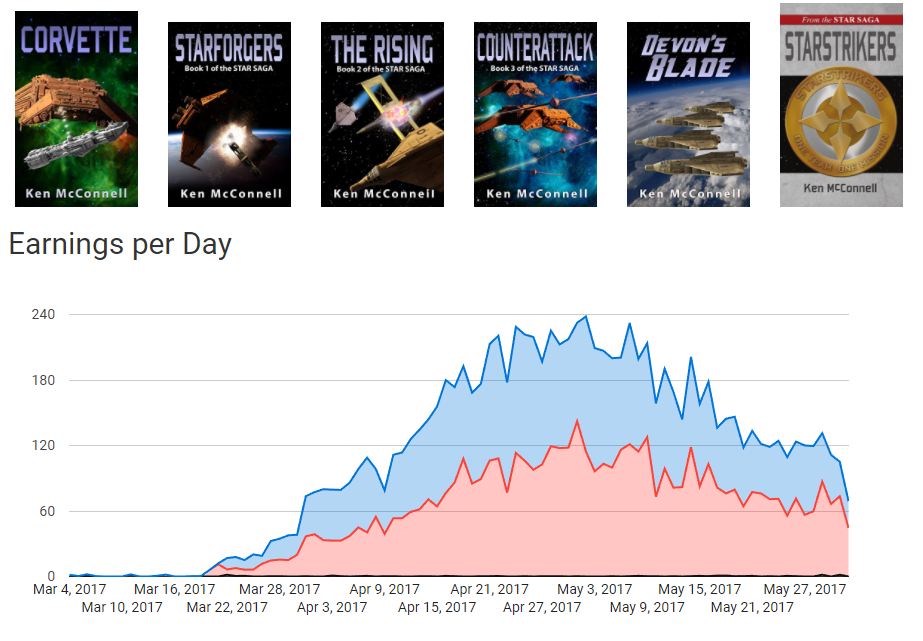