It’s been a while since I posted about this model. I’ve been busy with life and writing my next novel. Also, we’ve been using these models on the back covers of the paperback versions of the Star Saga novels. You should be able to buy these books next month at most online venues.

I decided to focus on the head for a bit so I could finish installing the fiber optics for it. Detailing the back and bottom happened first and now I’m moving on to the sides. The top of the head was detailed also. Below are a series of pics that show the head’s progress in the past month. 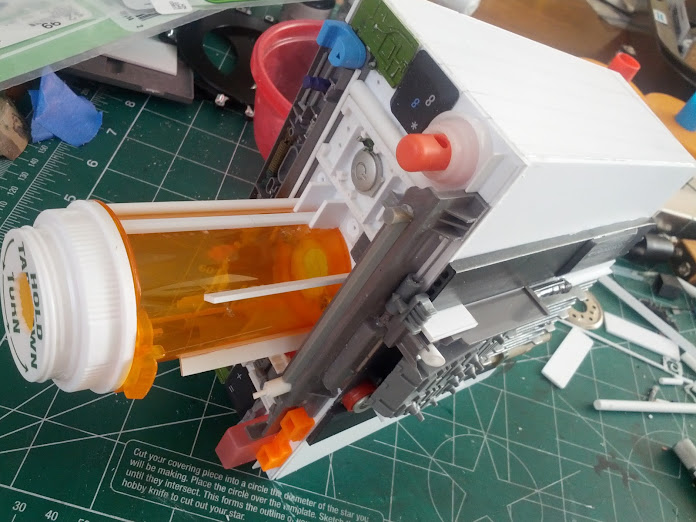 Back and bottom of the head as I detailed it with whatever was on hand. 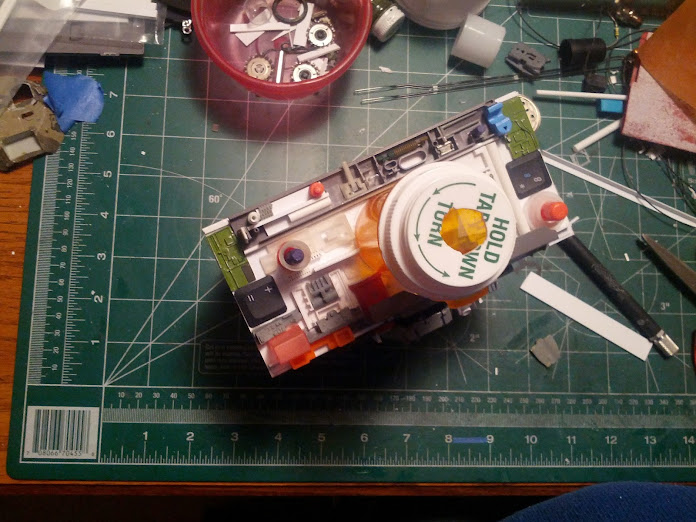 This is the other side of the back of the head. Liberal use of computer components is evident, including CDROM cover plate, keys and other scraps of plastic. 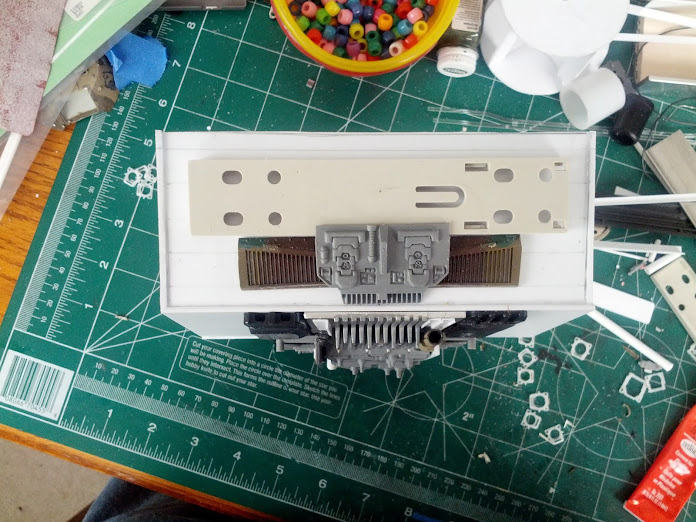 This is the bow details coming together. Tank parts dominating here. 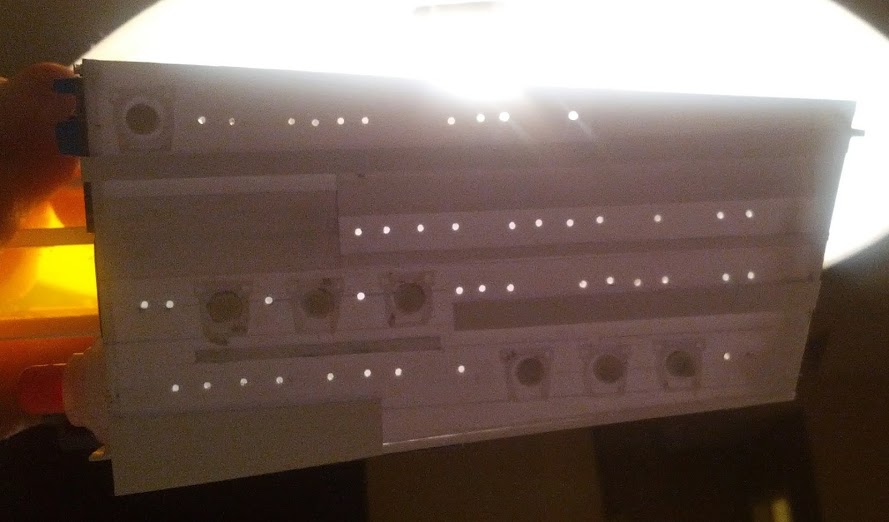 Back lighting my portholes after drilling them out. Not as even as I had hoped, but I learned a trick from Bill in the comments that I’m going to try for the other side. Use masking tape to form a guide to drill along. These are the details on the bottom of the head. 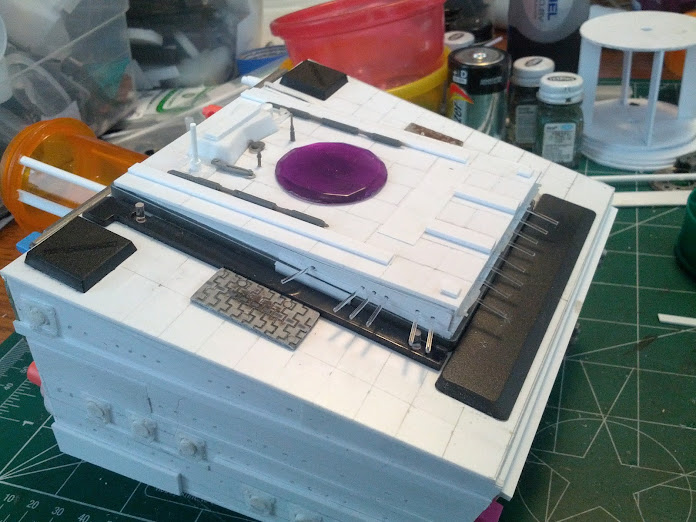 Really happy with how the top of the head is turning out. Can’t wait to see it painted up so the details blend in.

This week I took a break from the head and worked on the engines and framework of the body a bit. I used the PVC pipe again for the star drives and then only the outboard ones. There is a center engine, but I planned to not show much of it, so I left the space hollow for electronics and such. 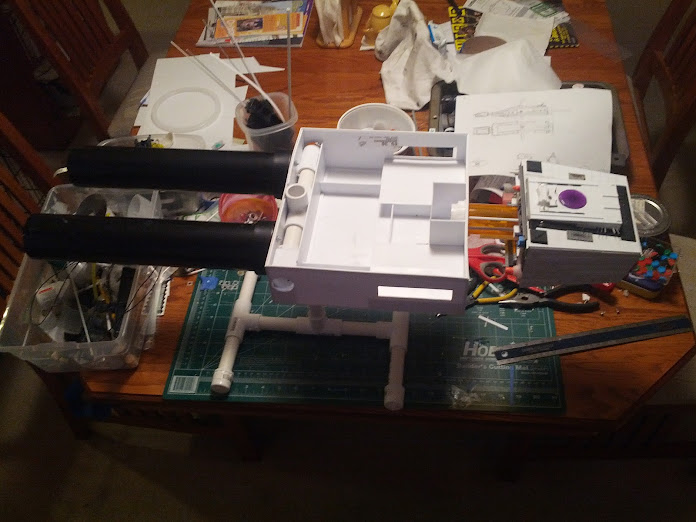 Above is the PVC pipes literally bolted to the frame box with screws. 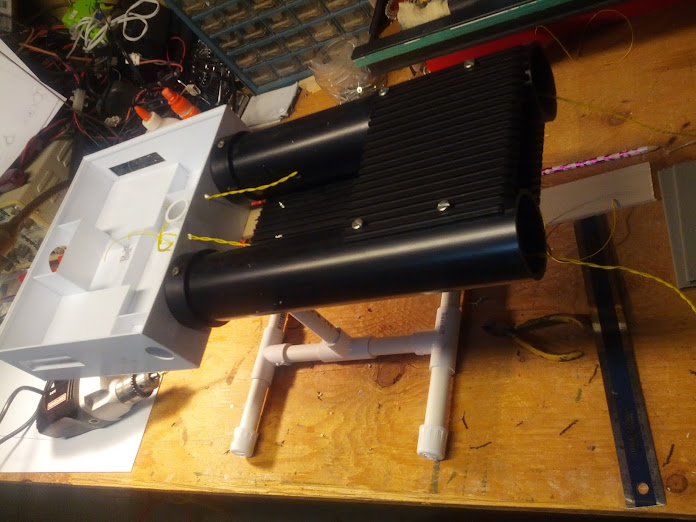 This is on the work bench where she stands now. I used the corrugated plastic face of old server computers to hold the engines together and provide internal strength. 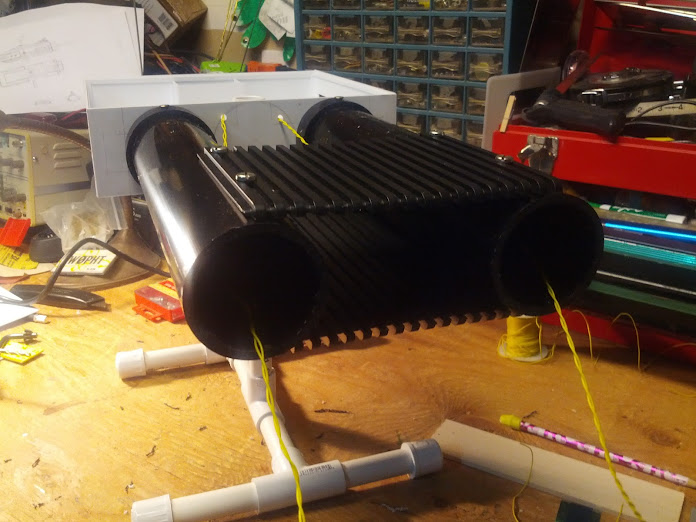 The yellow wires are intended for the lights that will be in the engines. They are not connected to anything yet. 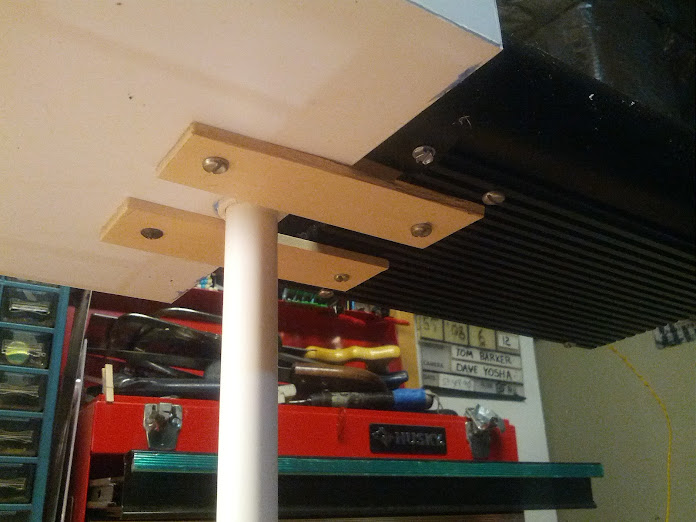 This is the under belly of the model where I used some basswood strips to brace the engines to the main frame and take some of the stress off the plastic bulkhead. All of this will be covered with plastic soon.

That’s it for now.

This will be my first starship build to include fiber optic lighting. I ran across an article somewhere on the web about this and they recommended .265 diameter fiber and a #84 drill bit. So I ordered these things and they turned out to be far too small for my ship’s scale. What I really needed was about 1 mm diameter fiber.

So I reordered the correct bits and fiber but that left me with some extra thin fiber laying around. I found a use for it pretty quickly. My duel landing bays needed some landing lights and so I set about drilling and threading them up on the landing bay deck. 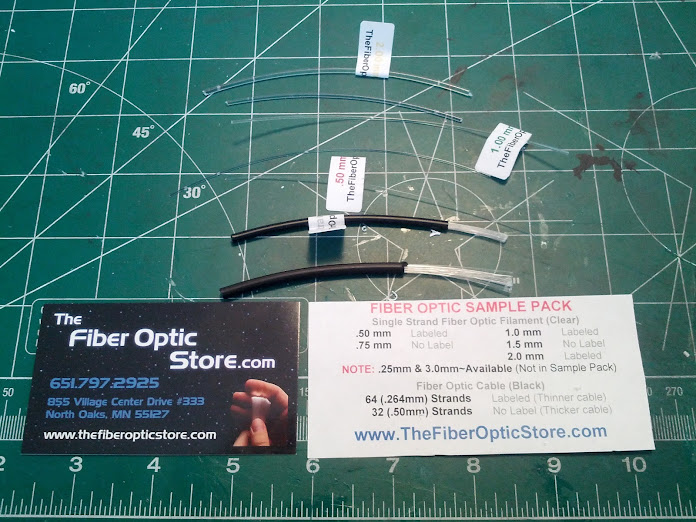 This is the sample pack that The Fiber Optic Store sent me and it allowed me to decide on the proper diameter for my model. 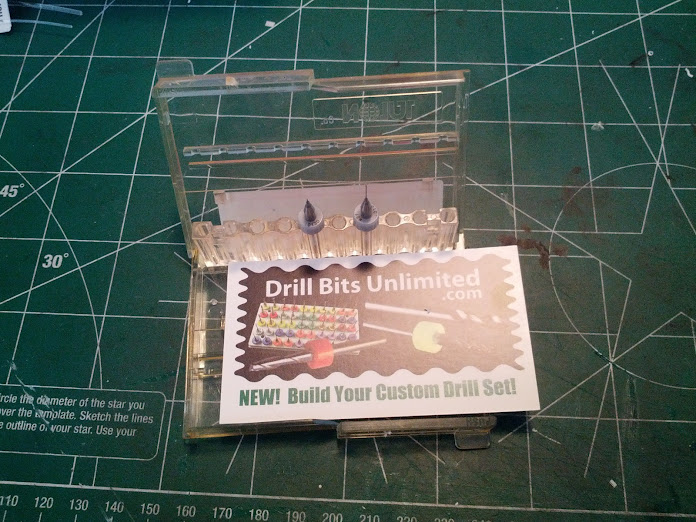 I purchased my #84 bits from Drill Bits Unlimited and they came in this handy case to keep them safe. I’ve already broken one of them off, good thing I got two. Here we see the bundle of fiber being glued into the underside of the landing bay deck, which was raised to account for the fibers. I used Elmer’s white glue to secure them. This works, but is not ideal and the fibers can easily be pulled out. 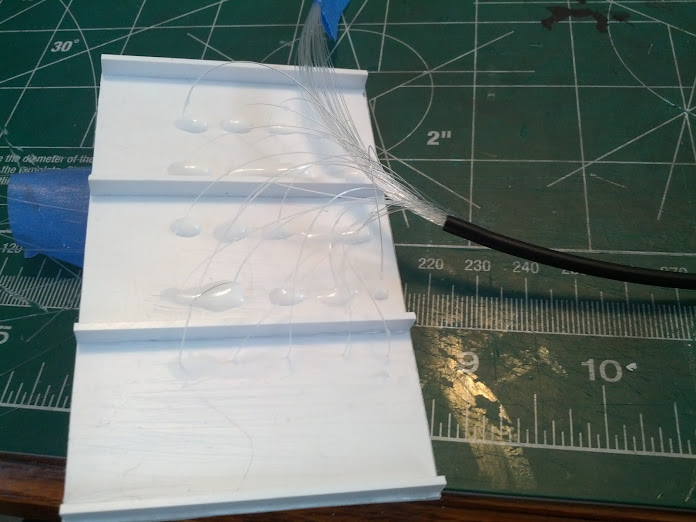 Here’s the finished deck with glue drying. Notice I taped things down to prevent wiggle. The next step was to paint the deck. The fibers stick out a few inches on the other side. After I painted the deck, I used nail clippers to trim off the fiber. 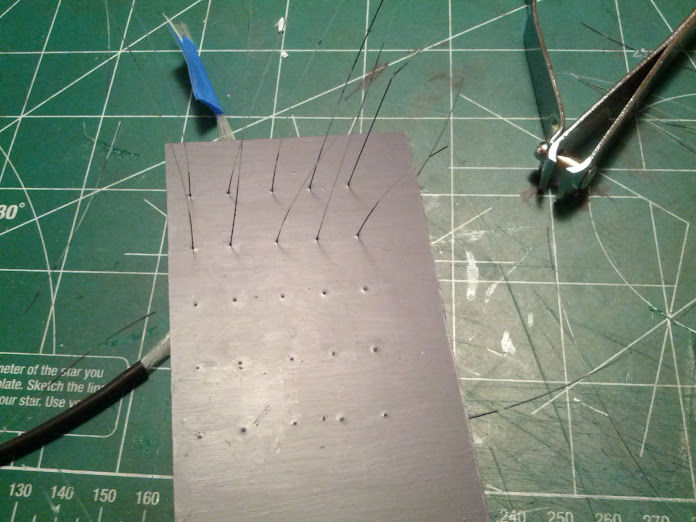 Here I am clipping fibers on the painted deck. 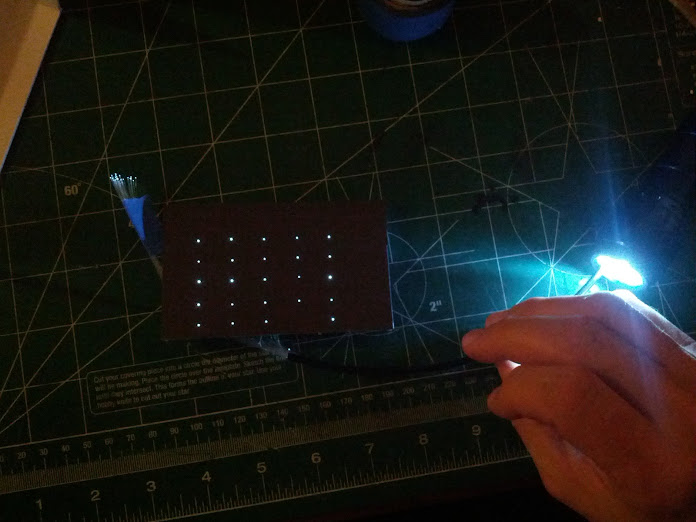 The finished fibers are perfectly scaled for deck lights. I learned that the bundled fibers are perhaps not the best solution. When I use the larger fibers for the portholes, I will bundle my loose fibers myself with shrink tube or tape. 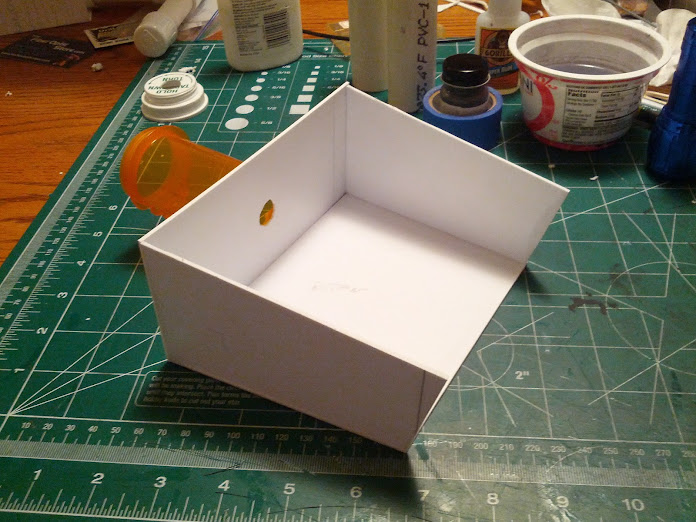 I started framing the head of the starship, using the pill bottle as the neck. I later secured it to the head with tiny screws. The bottle slides into the body and is secured with the screw top. I love it when a plan comes together like that. 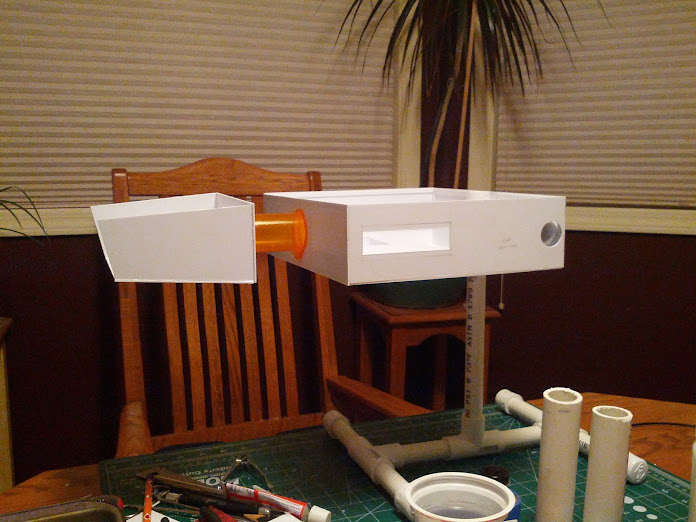 Here is the head mounted to the body. That’s all I’ve done in the past week or so. I should get in my new fiber optics and bits this week, so I can start mapping out where the portholes will go. I also need to start building up the engines.

To this point: 8 hours of work. 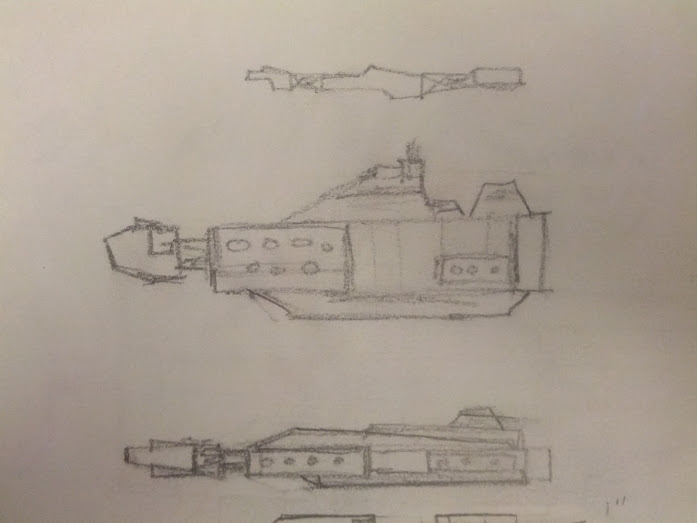 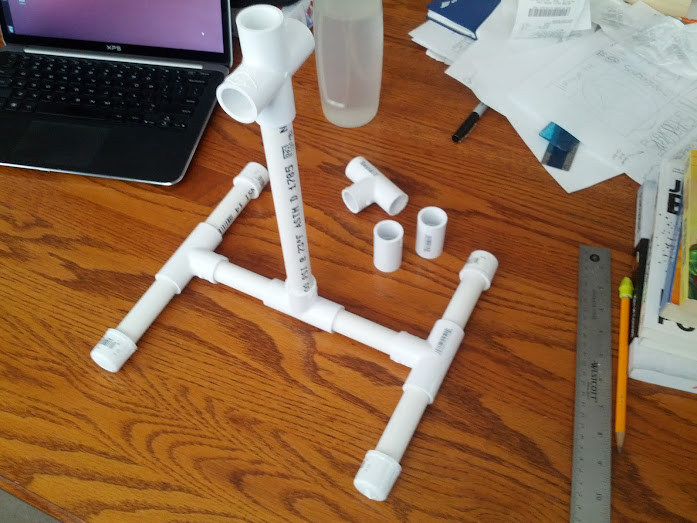 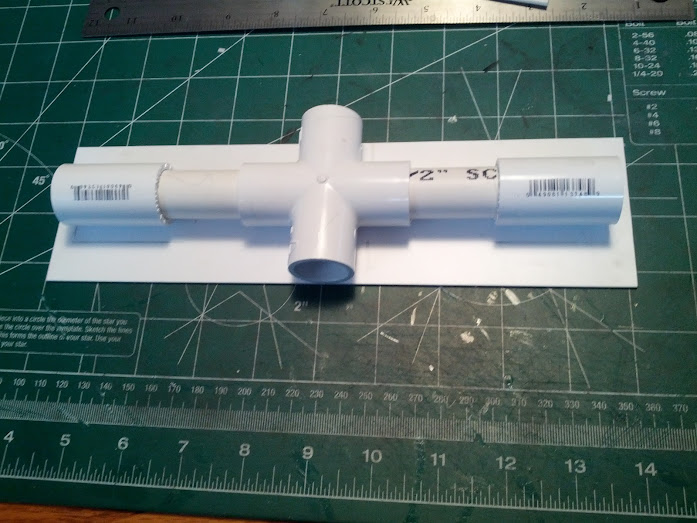 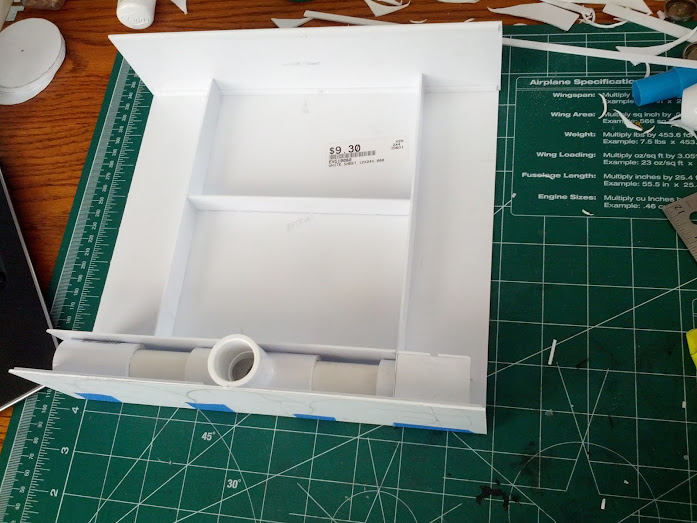 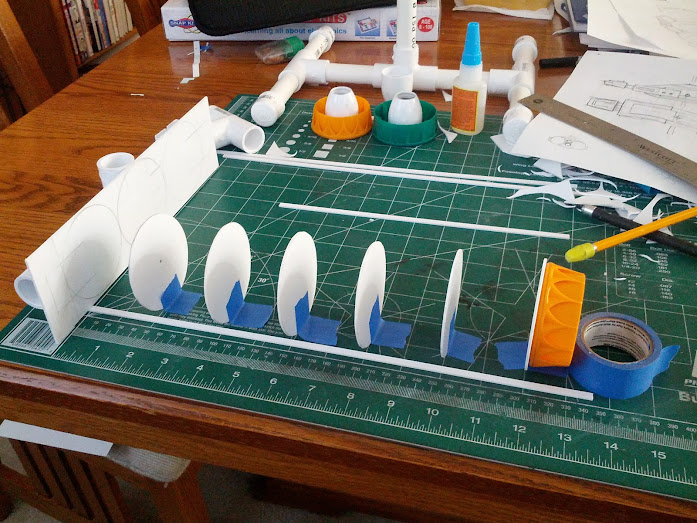