This post will be very high on the film geek meter. If you don’t care about how movies are made, move along.

Close Up of the Hero played by Spencer. The camera is mounted on a tripod and looking down at him, we are in the POV of his opponent who is taller than Spencer. The background is light colored and the lighting on his face is hard key from the left. This throws the opposite side of his face into shadow, which sets his face apart from the light background. This shot is nearly perfectly aligned. It could have slightly more headroom on Spencer. There was enough ambient light in the garage to not bother filling in the dark side of his face. The high key light adds to the drama and seriousness of the shot. 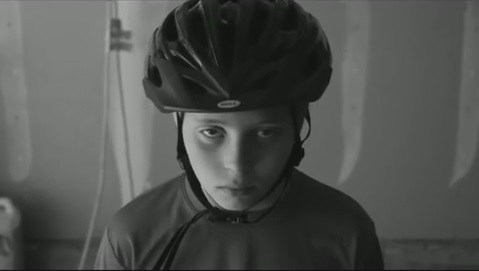 This is the opposing shot of the villain, played by Jack. He’s taller and more imposing, so the camera is lower looking up at him from the POV (Point Of View) of Spencer. Again we have high key from the sunlight outside. Again the background, while more interesting than with the plain wall behind Spencer, is also darker overall. Because – bad guy man! But we still give the shadowed side of his face a lighter background. This stuff is not by accident, it’s the way you light a dramatic film. The angle could be lower in this shot to accentuate his badness and greater height.

I actually was concerned you’d see the cameraman in his sunglasses, so I had Spencer stand right beside me. In the end, he’s not very visible and neither is the cameraman. Did you notice the bad guy is wearing darker colors than the good guy? That was a lucky coincidence. I didn’t plan that. But your subconscious knows it as you watch the film. 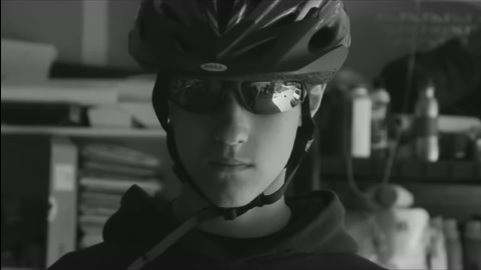 Two shot of the hero and the bad guy facing off. Here you see the height difference real good and there is a slight hesitation on the part of Spencer as they slide into view. Meanwhile, Jack is big and imposing and non-moving. Reinforcing the notion that he’s the heavy. The background should have been darker. This would separate their faces better from the noise of the background. Otherwise this is a pretty boring shot. The focus is on the racers and not the background, so having them in focus and the garage soft helps make them pop. 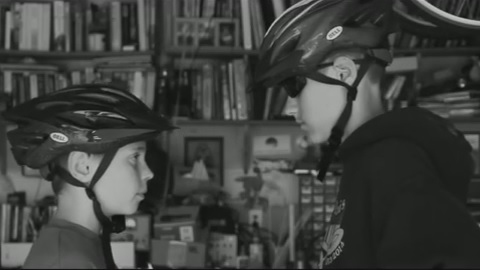 Now we cross over and are looking out into the glaring sun. This shot was exposed for the background, which causes the foreground to go into silhouette. Because the background is also way out of focus, we only focus on the two racers. This shot was carefully staged so that both boys would slide out of frame and I could rack focus the lens to the third boy standing in the driveway ready to flip the coin. It took us two takes to get the slide out and rack focus to work. Not too shabby. Many have pointed to this shot as the most memorable one in the film. 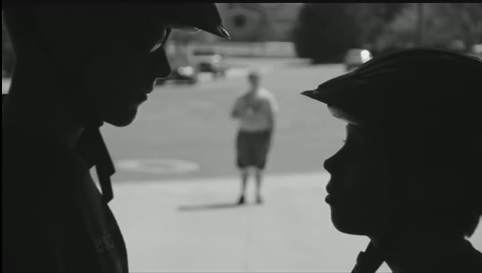 Coming out of the darkened garage, the racers blast past the camera. I went low with this shot for added dramatic flare. It would have been more awesome in wide screen! But getting the camera low, adds speed to the shot. We are thrust into the race at the start and it only gets faster as we go. Cutting as they have already started also adds to the speed of the shot. 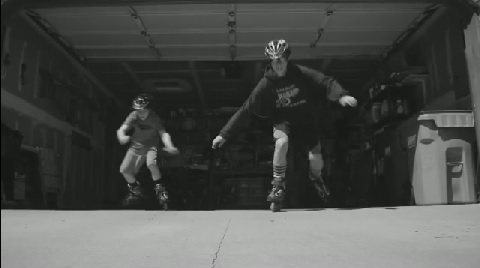 About the only thing this shot has going for it is speed and intensity. The racers are dark against the light of the background. That’s good. But they are soft in focus due to my limited depth of field. I should have exposed this closer to f11 instead of f8. Especially since all the exteriors had the ND 8 filter on them. Which makes the image darker and lets you bring your f-stops up to f11 or f22. The shaky camera covers this a bit and puts the audience right in the action and intensity of the race. I was running with them, not skating. I don’t skate. 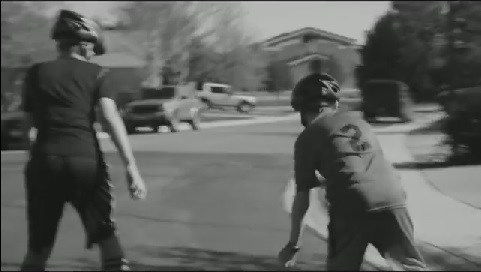 This is the only tripod shot of the race and it’s also a panning shot. I went wide angle to try and catch some JJ Flare in the sun but wound up with a washed out look that only works to cause unease in the viewer. Luckily the racers go by fast enough that nobody focuses on how awful the shot looks. The bad guy pushes our hero out of the way and passes him with an evil laugh. I do like the long shadows in this shot, working to re-frame the shot. 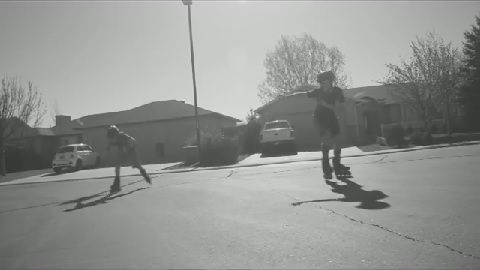 The final shot before the crash is back to a hand held camera. We want to press the gas pedal here and rocket the viewer into the big finale. I think it works well enough, but it’s not a pretty angle. This is also where the Hero starts to get the upper hand in the race by cutting inside. In this shot you can really see the color difference in their outfits. 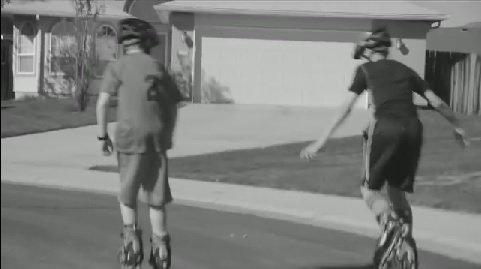 Worst shot in the film! This shot is poorly acted in that Jack didn’t really “sell” the hit to the fender and my horrible, washed out image didn’t help it one bit. Of all the shots we did that day, this is the one I’d like to re-shoot. I think I’d cut to a shot of him coming over the hood of the car to help sell the impact. Maybe add some lens flare and shaky camera. A close up of Spencer’s face as he zips past might work to, if it was quick. Maybe cut with a CU of Jack’s expression as he flies over the car. 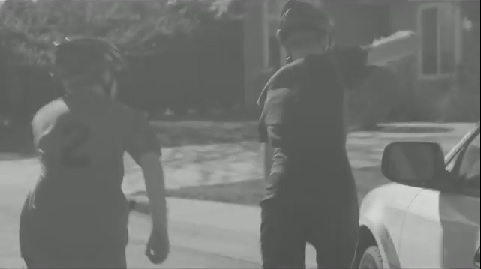 This is the POV shot of the bad guy rolling after he crashes in the grass. I did it hand held and rolling around in the grass. It ends in a tilted shot of the victor passing. This is my Dutch Angle shot for the film and I think it finishes strong on the action side. 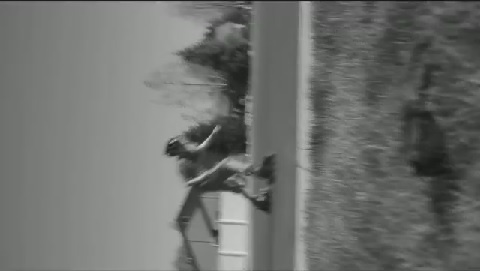 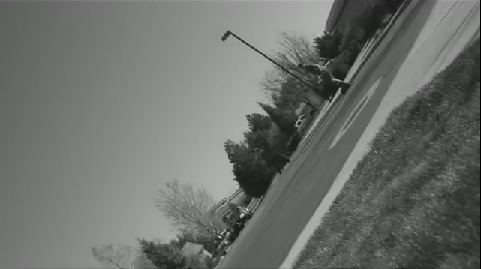 The victory pass by the hero. I didn’t give Spencer any guidance for this except to be happy that he won the race. He instinctively raised his hands in a “V” shape as he went past and the end result is just great. You really sense his pleasure at having triumphed over the bad guy. The shot is composed well, with the subject to screen right following the rule of thirds. The background trees help balance out the frame and add a bit of interest without taking away from the main action. 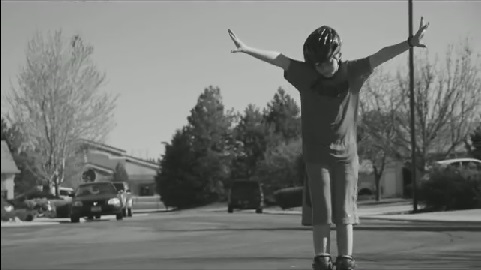 Thus ends my shot by shot break down of Film 3. Every time you shoot a film, it helps to break it down afterwards and find out what worked and what didn’t. That’s how we learn from our mistakes. There were many great shots in this film and one or two bad ones. Fortunately the bad ones didn’t ruin the film for most viewers.