Last year my Macbook finally gave up the ghost and I was forced to buy a new laptop. I elected to go with my gut and use Ubuntu instead of a new Mac. I’ve been using Ubuntu on my secondary PCs for years. But all my writing and other web-design work was performed on the old, white Macbook.

In deciding to go with Ubuntu instead of Mac, I was forfeiting the use of my primary writing tool – Scrivener. Sure you can mess with an unsupported Linux port of the program, but really I was going to have to start over with something else. Most writers would have been appalled at having to go back to Word or LibreOffice, but I had reason to believe that life after Scrivener would go on.

I purchased a new Dell 13″ XPS and booted into Ubuntu, never looking back. The computer worked great and the OS was a breeze to use. Then I found a Scrivener-like program that was designed to work on Linux. Plume Creator has proved to be a great program for writing and plotting my novels. It works enough like Scrivener to make me happy.

In the past few month lots of interesting developments are happening on Ubuntu. The OS is being used on everything from phones to computers and the acceptance level by companies not normally accepting of Linux is growing. Gaming platforms like Steam are coming to Ubuntu and developers are continuing to filter over from Apple. Mind you, its no land rush, but many folks are realizing that they can live without the Apple and Windows.

As for the Dell, it has performed really well so far. My only issue is a hardware one. The screen has developed a few bad pixels. I wonder if I can send it back and have them replace the screen with the new higher resolution one? ;-)

I don’t miss the Macbook at all. My coding and writing processes have not changed, many of the same tools I used on the Mac are available on Ubuntu, some are actually better in my opinion. Would I recommend everyone leave Apple and Windows for Ubuntu? No. Only the hardy ones, willing to use something better and take all the social abuse for being different. Mmmm, that sounds familiar.

The ppa that I linked to in my post about installing the kernel fixes by Kamal Mostafa has moved to a Canonical server. Please update your Dell XPS laptop to get the latest fixes.

Type the following lines into your terminal one at a time, hitting enter after each one to update your system:

This will start the updater program and get you all the latest fixes from Canonical.

The biggest annoyance I have found since I moved in to this Dell XPS 13 laptop running Ubuntu is the over sensitivity of the trackpad.When I was typing, just the slightest touch of my wrist pads on the trackpad made the cursor jump around to some random place in the manuscript. It was becoming quite annoying for someone who spends a great deal of time writing on their laptop.

Then I came across a web page that recommended a program to download that would help tweak the trackpad’s sensitivity. I gave it a try. 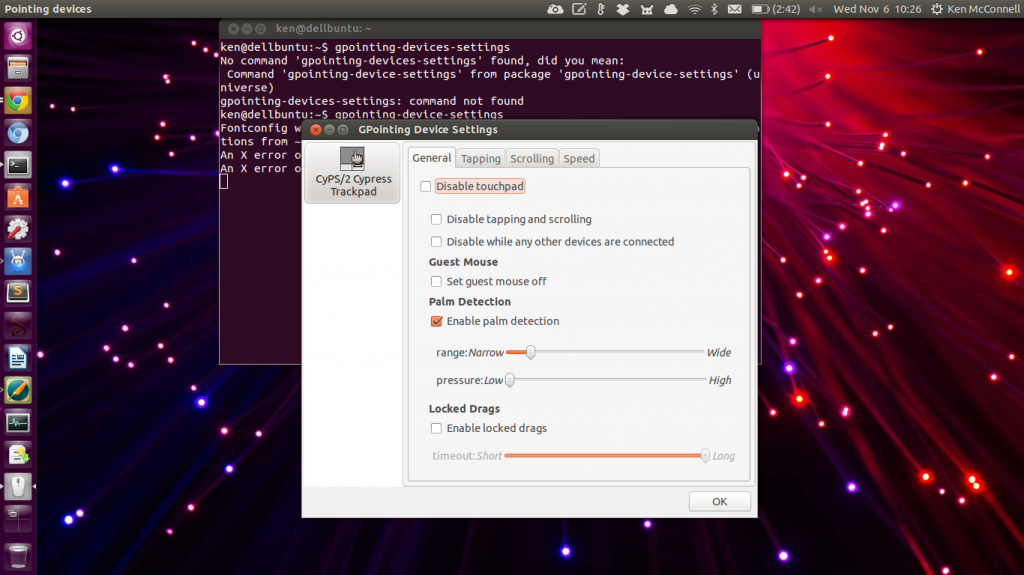 Here’s a screenshot of my settings. After I used this program I was able to type without changing the cursor’s location all over my manuscript. I’m not sure if the settings will hold after a reboot. But things are running much better using this handy GUI. There is no About menu to tell me who is responsible for this handy app, but I really appreciate their efforts.

Now back to the novel.