Special Birthday edition of the Weekend Update. Today I am forty-eight years old.

My son’s team got shut out by a group of kids that have been playing for each other for four years and were really good. But they shut out the other team in the second half, so they were making adjustments good. We have two key players injured. Hopefully they will be back for next week’s game.

My BSU Broncos had a big day on The Blue, destroying Tennessee Martin. Not sure if this means the Broncos are still good, or just good against lesser teams. Time will tell.

A big week for testing Plume Creator, the writing software I use. Cyril, the programmer served up a new stable build that fixed a bug in how the main text was displayed and in turn created a new customization tool for it. It has been such a pleasure working with Cyril and the other software testers that work on Plume over the past year. The program has come a long way and now I can finally say that I no longer miss Scrivener. In a month or so I will have finished my first novel using Plume Creator and I can honestly say that I love writing with it. I first started using Scrivener when it was in beta years ago but I never had a relationship with the developer. Chiefly because Scrivener is closed source and therefor not open to the kinds of suggestions that an Open Source project like Plume Creator is. So while you can suggest that Apple, Microsoft or Scrivener add a feature to their software, unless thousands of users agree, it ain’t happening. Meanwhile, everyone who uses Plume Creator can have a voice in what features are added even how they get implemented if you know how to program. 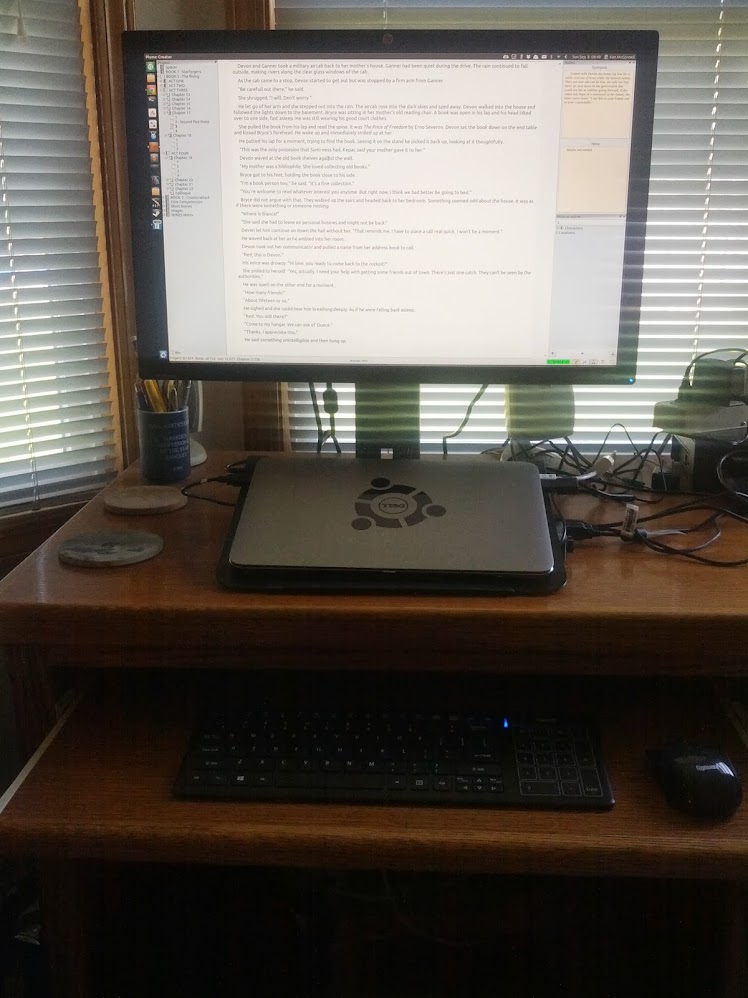 If you take the time to download and actually use Plume Creator, we encourage you to send the programmer emails when you find a bug or if you can think of a better way to accomplish something. Cyril appreciates all input and everyone will benefit from it in the end. One of the things I always preach when it comes to writing is giving back to the art and craft. If you have success, help lift others up. If you have a skill, pass it on to others. If you use a tool, help the developer make it better. It’s more than just good karma, you may actually learn something about yourself and your tools. And that will make you a better person and a better writer.

I ordered a new laptop stand and a seven port USB 2.0 hub. They both arrived this week and below you see them in action on my home writing desk. I’m happy with both products now that I slid the hub under the stand to hide its high intensity green power light. Why do companies make such bright lights on appliances? Don’t their designers actually live with their products? I think not.

I also found a shorter HDMI cable to use for connecting the laptop to the monitor. Be nice if dongle makers would cater to non-Apple devices and make black HDMI adapters. White is a horrible color for a computer accessory. The two outside ports on the USB hub are power chargers for my phone and tablet. The first two slots are taken up by the wireless keyboard and mouse, which is why I needed USB 2.0 instead of going with the 3.0 version. Apparently USB 3.0 interferes with wireless signals. The Cooler Master fan stand seems to be doing the trick in keeping my CPU happy while attached to the external monitor. I’ve been monitoring the CPU temp and it seems about ten to fifteen degrees cooler than without the fan.

Now I need to work on wire management and see if I can clean up this desk a bit.