This little novella is starting to garner some praise out in the world. Reader’s Favorite is the latest, giving it a Five Star review!

Previous reviews include this one from Self-Publishing Review -“If you’re a fan of war fiction, especially with aerial fighting, and like your science fiction to have a large dose of recognizable realism, Devon’s Blade is action-packed, well-researched, and a fun read.” Self-Publishing Review

I’ve been switching back and forth between reading two Space Opera novels. They are both authors who are not known for their Space Opera. The first is Second Star by Dana Stabenow who has made her name as a mystery writer. The second is Molly Fyde by Hugh Howey, famous now for his post apocalyptic Wool novels.

Second Star is the first in a trilogy of Space Opera novels centering on Star Svensdotter a female protagonist who lives and works on an L5 colony. I’m only a few chapters into both of these books but already I’m hooked and enjoying the differences. Second Star is written in first person and is more of an adult novel. Where Molly Fyde is a Young Adult novel written in third person.

The main character of Howey’s book is a young woman trying to be a pilot in the space Navy and meeting resistance from the all-male military school. I like the universe that Howey is building because its more like Star Wars, with aliens and hyper drive starships. Where as Stabenow’s novel is more realistic and grounded in near future science, at least early on.

Both of these writers are very good at their craft and I wonder why neither has returned to the genre. Probably because sales for uplifting Space Opera stories are low right now as people prefer to read about doom and gloom and zombies. BORING. But if all that changes, I look forward to a renascence of Space Opera.

I’ll update this review after I finish these novels, but right away I can recommend them both if Space Opera is your thing. Oh, and kudos to Dana Stabenow for quoting a Heinlein  character in her novel. ;-) 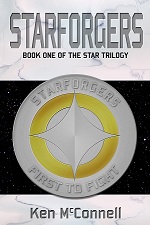 My novel Starforgers got reviewed this week by Jake Scholl on his blog – Goblins, Swords, Elves, Oh My! Jake has reviewed several of my books in the past and he enjoyed Starforgers. Please stop by and read what he has to say about it. No spoilers included in the review.