Home for the novels and short stories set in the Joshua Jones Mystery Series, as written by Johnny Batch the Mystery pen name of Ken McConnell. 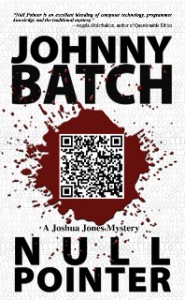 Kill Dash Nine – The next Joshua Jones Mystery. When I sell 1000 digital copies of Null Pointer, I will write the sequel.

“The Safe Cracker“ A safe cracker gets involved in a crime spree.

A Google Map of Locations featured in Null Pointer.