Last night I spent some time building an SVG version of my universe’s map. I managed to get all the known systems north of the Neutral Zone. The end result is to have a Scaleable Vector Graphics or SVG version of the map that I can then overlay onto a photo of a galaxy. The reason I’m making it in SVG is so that I can shrink it and adjust it and still have it readable. The program I’m using is called Inkscape and it’s free and Open Source.

But for right now, I simply want a better map of my fictional galaxy to keep myself and my readers from getting lost. Once I build out all the known systems, I can then make layers that show trade routes, battles and alliances. If you follow my stories some of these worlds will be familiar to you.

I suppose the first thing one might wonder about this map is how I came up with all those planetary names. Some of them are from stories that I’ve written in the past, others are names I found while looking at maps of the world or star charts. A few I actually put some thought into and are designed the way I intended them. For instance, the planet of the Silicants, XiniX, is deliberately computer-ish. 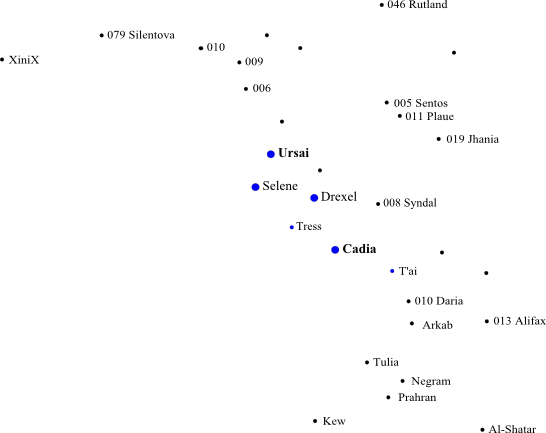 Selene, for instance is the mother world for the humans in my Epic Sci-Fi stories. It used to be called Zain back when I was a kid and first putting together this universe. But age and taste have caused me to change it to Selene. The larger blue dots represent the original planets of the Federation, before it expanded out.

The key to naming planets and stars in your SF stories is to make them unique and yet somehow familiar. They can have alien sounding names, but don’t just string consonants together and separate them with an apostrophe. Put some thought into how your reader will pronounce them.

This map continues to inspire and guide me as I write stories in this universe. Some of the planets named are blank pages, just waiting for me to write a story set on them.